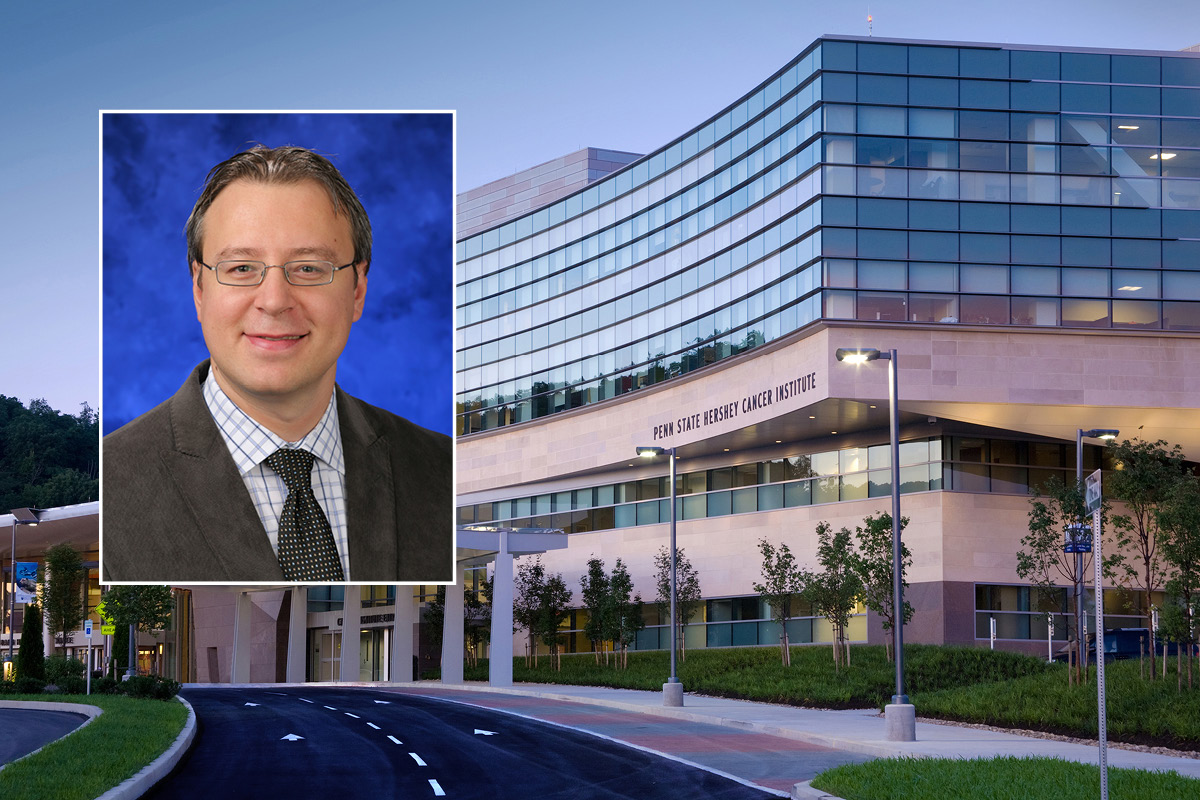 The human body is made up of trillions of cells that divide throughout a person’s lifetime. Each time a cell divides, its genetic material is copied and reproduced so the duplicate carries the same information. This process of DNA replication happens continuously in humans and cells use a series of biological safety nets to make sure the process goes smoothly.

George-Lucian Moldovan, Penn State Cancer Institute researcher and associate professor of biochemistry and molecular biology at Penn State College of Medicine, and students and postdoctoral scholars in his laboratory are working to better understand the cellular machinery that repairs DNA when something goes wrong.

“Genetic mutations that cause cancer may occur as a result of DNA damage from environmental exposures like tobacco smoke, radiation and sunlight,” Moldovan said. “Cells have several mechanisms to ensure that the resulting damage can be repaired, but sometimes a person’s cells may already have genetic mutations which limit the capacity to fix that damage correctly.”

Moldovan said the classic examples of flaws in DNA repair are the BRCA1 and BRCA2 gene mutations, which can cause females who are born with it to be predisposed to developing breast and ovarian cancers. These mutations cause a deficiency in a person’s ability to repair DNA when cells are exposed to DNA damaging agents.

While genetic mutations sometimes wreak havoc on the cell’s ability to repair DNA, cells can find other means to mend this damage which can make them resistant to certain types of chemotherapy.

“Mechanisms of DNA repair are beneficial for the body by preventing mutations which cause cancer,” Moldovan said. “However, cells can harness these same mechanisms to develop resistance to therapies used in the clinic that aim to kill cancer cells by creating so much DNA damage that the cancer cells can no longer survive.”

The lab published two papers in 2020 in the journal Nature Communications that explore DNA damage repair – the first was led by MD/PhD medical scientist training program student Kristen Clements. She studied why a subset of cancer patients with BRCA2 mutations might be resistant to a drug, olaparib, which is largely effective in patients with these mutations. The drug is designed to hinder the activity of an enzyme involved in DNA repair. However, in some patients, cancer cells are still able to survive by fixing DNA using other repair mechanisms.

Replication fork DNA tracts (red and green) are seen in an image of DNA molecules (blue) isolated from cells in the Moldovan Lab. These replication forks maintain DNA stability and correct errors during DNA replication, protecting against cancer.

“An oncologist could see many different cancer patients in a day – each with their own unique genetic profile,” Clements said. “These profiles are often used to select personalized treatments which are predicted to be most effective against an individual’s specific disease. We decided to investigate what gene mutations may affect how cancer cells respond to olaparib.”

Clements used CRISPR, a genetic engineering technique, to knock out or activate certain genes in cultured cancer cells with BRCA2 mutation to see which ones result in resistance to olaparib. The team found that loss of activity from two additional genes resulted in resistance to the drug by using other mechanisms to repair the DNA. Moldovan said their next step is to determine whether patients resistant to olaparib have some of the same genetic mutations they identified.

The second study from the lab, led by graduate student Tanay Thakar, explored how a protein called proliferating cell nuclear antigen (PCNA) regulates DNA replication. Thakar found that when a molecule called ubiquitin modifies PCNA, it allows the protein to respond to stresses in replication – such as those brought on by chemotherapy.

“This modification is essential for the DNA replication process,” Thakar said. “We also uncovered during the course of our study that in BRCA-mutated cancers, cells become hyper-reliant upon this modification process in order to survive and replicate. If PCNA ubiquitination provides a way around the DNA damage caused by chemotherapy, then that could have a direct effect on patient outcomes.”

Moldovan said the lab will continue to explore mechanisms of DNA repair in order to develop ideas for therapeutics that might prevent cancers from occurring and make malignant cells that have already developed susceptible to chemotherapy.

These studies were supported by the National Institutes of Health and the St. Baldrick’s Foundation. The content is solely the responsibility of the authors and does not necessarily represent the official views of the NIH or other funders.