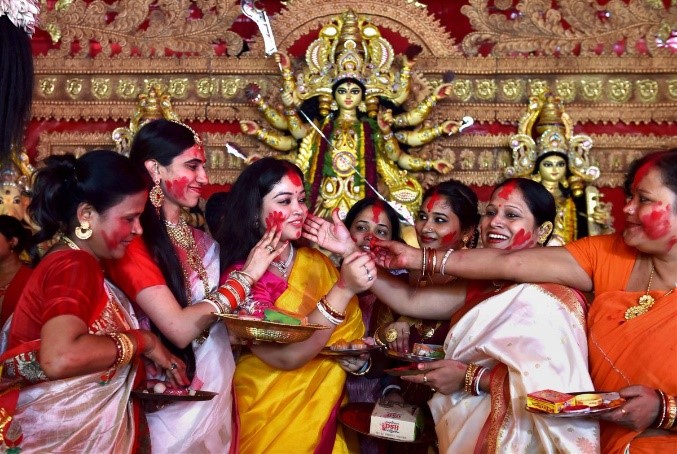 A nine-night festival during the Hindu month of Ashwin, Navaratri is a celebration of the Feminine Divine. It is celebrated every year in the autumn. It is observed for different reasons and celebrated differently in various parts of the Indian cultural sphere. However, in practice, it is the post-monsoon autumn festival called Sharada Navaratri that is the most observed in the honor of the divine feminine Devi (Durga). Celebrations include worshipping nine goddesses in nine days.

Stage decorations, recital of the legend, enacting of the story, and chanting of the scriptures of Hinduism, and the public celebration of classical and folk dances of Hindu culture are the different ways of celebrating festivals. Hindu devotees often celebrate Navaratri by fasting.

Though Navaratri is a deeply spiritual festival, specifically about honoring the Feminine Divine, everyone and anyone can participate in whatever capacity best suits them. Navaratri is about inviting and engaging all of the public in honoring the fiery protective and soft-hearted energy of the Divine. It is also about encouraging everyone to realize this energy is within all of us, and that the world is greatly benefited by us becoming more aware of and appreciative of it.

Read more about the cultural significance of Navartri Here

Check out our Navartri displays at cafeteria locations Sept. 23-27!

If you have any questions or require accommodation for a disability to participate, please email diversity@pennstatehealth.psu.edu.