Penn State Health honored more than 200 graduates of the Human Resources Center for Learning and Leadership Development program at its second annual Evening of Excellence on Jan. 9 at the Hershey Theatre.

The Penn State Health and Penn State College of Medicine employees completed one of three leadership programs in 2019 ― Emerging Leaders, Leadership Essentials and Mid-Level Leaders. This year’s program expanded from 125 graduates last year. They were each nominated by their manager to participate. See the complete list of participants.

“It takes tremendous commitment to participate in programs like these while also fulfilling your roles within your family, community and workplace,” said Penn State Health CEO Steve Massini. “On behalf of our executive leadership team and board of directors, thank you for your enthusiasm and effort to develop yourselves as leaders.”

Point at the image to reveal slideshow player controls. 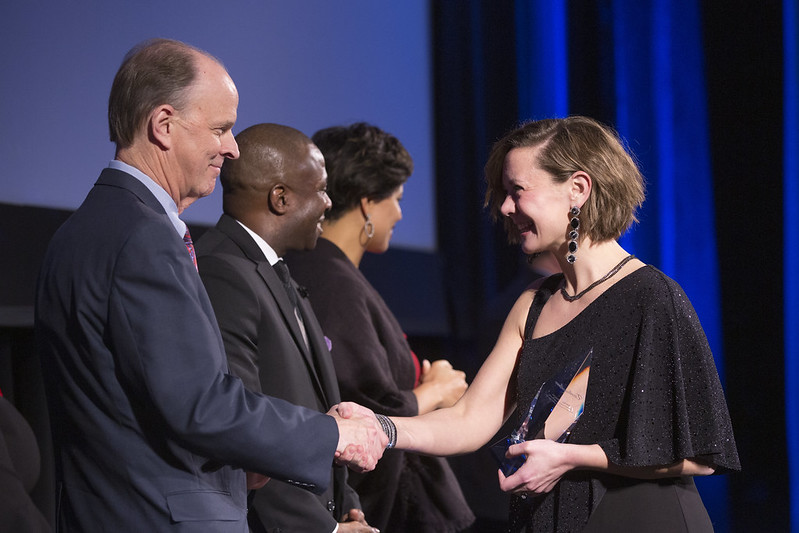 Patricia Williams-Forgenie said the most valuable part of the Leadership Essentials program for her was the opportunity to collaborate with employees from throughout the health system. “It allowed us to spend time together and learn from each other.”

“I learned practical skills for individuals looking to move into a leadership position,” said Vince Greco, an Emerging Leaders graduate.

In addition to growing in size, the Learning and Leadership Development program expanded its curriculum by adding a capstone project in 2019. Participants worked together in small groups on year-long projects aimed at assisting in the growth and improvement of the organization. They presented their proposals to managers and executive leaders in December.

Erin Harding, a Mid-Level Leaders program graduate, said her group’s capstone was on meeting effectiveness. “We structured it so it could be passed on to the next cohort and be an ongoing project.”

Members of the Penn State Health board of directors and other executive leaders attended the gala. “A fundamental difference between managers and leaders is that managers have subordinates, and leaders have followers,” said Dr. Kevin Black, College of Medicine interim chair. “I encourage you to be someone your co-workers want to follow, set high bars, lead with enthusiasm and optimism and try to do something great every day.”

David Swift, Penn State Health chief human resources officer and a U.S. Air Force veteran, shared how the leadership training he received throughout his 21-year military career serves him. “It helped me realize the importance of the people who surrounded me each and every day and how their success or failure was how I would be measured as a leader. As John Quincy Adams said, ‘If your actions inspire others to dream more, learn more, do more and become more, you are a leader.’”

April meeting of Faculty Organization to be held via Zoom, focus on COVID-19 updates