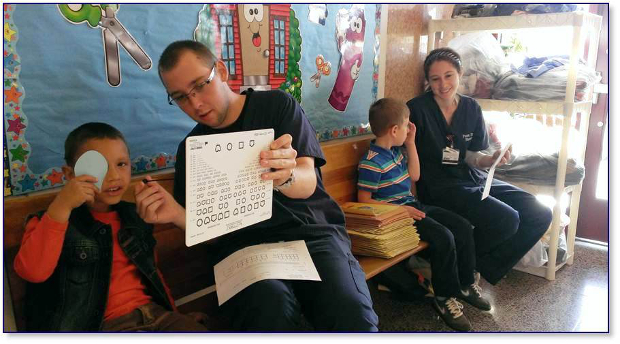 Nurses and staff from Penn State Milton S. Hershey Medical Center teamed up with nurses in the Lebanon School District again this year to perform required annual health screenings. They checked the height, weight, vision and hearing of the district's more than 3,700 students. As a result, screenings and data entry at seven schools that would have likely taken school district personnel much of the year to complete took just four days.

All of the data was gathered electronically and will be used to develop an action plan that will be presented to the school district.

This marked the second year in which Penn State Hershey nurses facilitated the district's health screenings. Also joining in the effort was the Medical Center's Office of Information Technology, which completed the data entry, and Penn State College of Nursing students, who helped with the assessments. In all, more than 200 staff took part in the initiative.

“We were thrilled to again have the help of Penn State Hershey in this process,” said Lebanon School District Superintendent Marianne Bartley. “Carrying out these required screenings can be very time-intensive and pull our people away from other important work in our schools.”

In the above video, learn about the initial round of student health screenings that Penn State Hershey helped facilitate in the Lebanon School District in 2012.

In addition, Dr. Deepa Sekhar, a pediatrician and clinical scientist, joined the team with a hearing research project. The purpose of her study is to look at noise-induced hearing loss in adolescents related to the use of MP3 audio players as well as concert attendance and other factors.

“The initiative in Lebanon highlights our hopes of making central Pennsylvania a better place to live by promoting healthy habits and partnering with other organizations to improve our community's quality of life,” said Judy Dillon, M.S.N., M.A., R.N., nursing community outreach coordinator at Penn State Hershey.

Over the next couple years, the Medical Center plans to identify additional school districts in south central Pennsylvania as potential sites for this school-based screening initiative. The goal is to provide schools with the tools they need to conduct thorough screenings and maximize use of the results to affect change.

This expanding effort is one example of how Penn State Hershey plans to meet the needs of the communities it serves as identified in the Community Health Needs Assessment, which was conducted during 2011 and 2012. Penn State Hershey collaborated with two community health systems – Holy Spirit Health System and PinnacleHealth – to carry out the assessment.