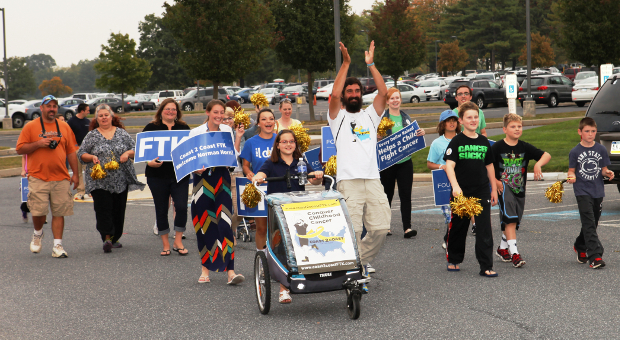 A Penn State alumnus who has been walking across the United States to raise money for the fight against childhood cancer made a stop at Penn State Milton S. Hershey Medical Center.

Norman Horn plans to complete his cross-country trek next month in Atlantic City, New Jersey, after setting out on April 5 from San Francisco. Along his journey of more than 3,000 miles, Horn has held awareness and fundraising activities to raise money for Four Diamonds at Penn State Hershey Children's Hospital. The mission of Four Diamonds is to conquer childhood cancer by assisting children treated at the Children’s Hospital and their families through superior care, comprehensive support and innovative research.

Horn was accompanied by several Four Diamonds families as he arrived at the University Conference Center on the Penn State Hershey campus. He was welcomed to the campus with a party featuring music and refreshments.

Speaking to supporters, Horn called his cross-country trek a “wild journey.” Nonetheless, he says he considers himself to be very lucky.

“I don't know why I was given the health that I have, but I'm going to use it to raise money for this cause,” Horn said.