Lawmakers, other dignitaries become medical students for a day 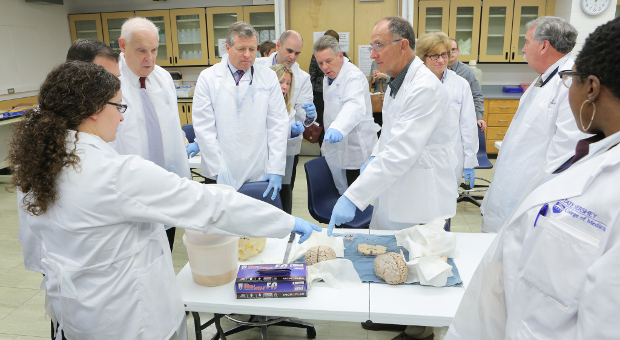 State and federal lawmakers, legislative staffers and others saw what it takes to train the nation's future doctors and learned about the challenges facing medical schools and teaching hospitals in Pennsylvania by becoming medical students for a day at Penn State College of Medicine.

Highlights of the day included a White Coat ceremony at which participants were ‘admitted' to medical school, a Match Day ceremony where they learned of the hospitals to which they were ‘assigned' to complete their residencies and a brief graduation ceremony.

Throughout the day, policymakers spoke with faculty, medical students, residents and others. Participants also took part in a hands-on session in the Penn State Hershey Clinical Simulation Center.

The event was part of Project Medical Education, which was designed by the American Association of Medical Colleges to give federal and state policymakers and their staff a first-hand look at medical education as the foundation of the U.S. health care system.