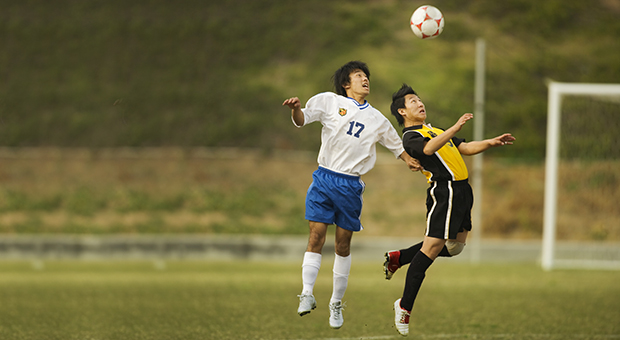 Soccer Players Competing for the Ball

When actor Will Smith plays a forensic pathologist who discovers neurological deterioration similar to Alzheimer's disease in the brain of a former NFL football player, the world pays attention.

“Concussion,” the movie he starred in, which hit theaters over the winter holidays, brought further media attention to a condition known as chronic traumatic encephalopathy, or CTE, which has been linked to repeated head trauma.

The condition may develop years after retirement from a contact sport. Symptoms include mood and behavioral changes, cognitive impairment and deteriorating motor skills in the later stages.

Although the awareness is great, Dr. Robert Harbaugh, director of the Penn State Institute of the Neurosciences, said scientists and medical professionals have more questions about the condition than they do answers.

“It’s an easily understood and seemingly compelling story to say that someone plays football and because of this they develop a degenerative brain disease years later.  However, this simple story doesn't hold up very well when you look into the details,” he said.

Right now, CTE can only be diagnosed by autopsy findings demonstrating a particular distribution of tau proteins in the brain. The problem is that tau proteins are found in the brains of most people older than 30, and they become more prevalent with age. Furthermore, it is impossible to tell if this is the result of head trauma alone or other factors, including genetic predisposition to degenerative brain diseases.

“Many things other than head trauma can cause deteriorating brain function and we don’t pay enough attention to them,” Harbaugh said. “Head trauma may be a necessary piece in this condition, but there may be other necessary pieces as well.”

Until researchers are able to tease apart the contributing factors and develop a plan for prevention, CTE will remain a controversial subject.

Dr. Matthew Silvis, director of primary care sports medicine at Penn State Health Milton S. Hershey Medical Center, said he understands the concern among parents wanting to know if they should steer their children away from playing football.

“As a parent, I'd be asking those questions too,” he said. “But the thing to remember is that this is not just a football problem. All contact sports carry a risk of repetitive concussion.”

Harbaugh notes that the largest number of concussions nationwide from sports activity are related to bicycling, because many more people ride bicycles than play football.

“I think the problem of CTE related to contact sports has been overstated and it has scared a lot of parents out of letting their children participate in these sports. The best available data show no evidence of an increased risk of degenerative brain diseases in people who played high school football,” Harbaugh said. “The rate of degenerative brain diseases in professional football players seems to be higher than in the general population but the largest study of NFL players shows that more than 90 percent don't develop these problems.”

“In fact, retired professional football players have been shown to be healthier than their age matched peers,” Silvis added.

Harbaugh and Silvis both note that athletes today use more and better protective gear than in the past, and most sports organizations have concussion protocols in place to better handle head trauma when it does occur.

Harbaugh said the real crisis is not CTE, but rather children not getting enough vigorous physical activity.

“Childhood obesity is really out of control and causing all sorts of problems,” he said. “Every time we scare people away from participating in a sport, we make that problem worse. Parents need to keep this in perspective. The benefits of that kind of activity far outweigh any potential risk.”

Learn more:
Drs. Harbaugh and Silvis will be among the experts featured on a web chat on abc27.com on Thursday, March 24 from 1 to 2 p.m. Click here for more information.