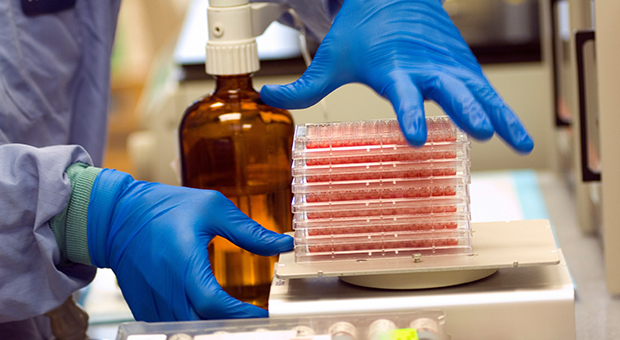 People with asthma have telltale molecules circulating in their blood, say researchers at Penn State College of Medicine. The discovery could lead to the first diagnostic blood test for asthma, as well as more targeted treatments for the condition.

There are currently no definitive diagnostic tests for asthma, a common chronic inflammatory lung disease that affects 25 million Americans.

“Right now, we diagnose asthma based on someone’s history and breathing tests—and both of those have limitations,” said Dr. Faoud T. Ishmael, associate professor of medicine and biochemistry and molecular biology.

There are also several sub-types of the condition, such as allergic or non-allergic asthma or the presence or absence of immune cells called eosinophils. The different variations make asthma harder to treat.

Some asthma patients do not find relief from inhaled corticosteroids, the mainstay of asthma treatment. Asthma sub-types could play a role in this but “there’s not a good way right now to understand what those different sub-types are,” Ishmael said. “This goes back to the underlying issue, which is that we don’t have a good blood test to tell us what’s really going on in the lungs.”

To that end, Ishmael set his sights on microRNAs (miRNAs) – molecules that help regulate gene expression. miRNAs were once considered “junk DNA,” but over the past decade, scientists have come to realize that they play an important role in many human diseases.

More than 150 miRNAs can be identified in blood, and they are beginning to be used as molecular footprints to diagnose and characterize diseases such as cancer.

“The role of miRNAs in asthma is not well understood, although it looks as though these molecules play very important roles in inflammation and in immune responses,” Ishmael said.

His team previously showed that miRNAs in the lungs and blood can be used as asthma biomarkers, and that they may regulate proteins involved in allergic inflammation. However, important questions still remained. For example, would people with asthma have different miRNA than people with other related conditions?

Narrowing in on 30 miRNAs important in allergies and asthma, the researchers found different expression patterns among the three groups. Based on these patterns, they were able to predict with 91 percent accuracy whether or not a person had asthma, opening the door to the development of a diagnostic blood test.

“We found that there was a subset of these miRNAs that were unique to asthma, and that we could use them to predict if someone had it based on if they were high or low compared to the other two groups,” Ishmael said. “There’s a different molecular fingerprint if you have asthma compared to if you have allergic rhinitis or neither.”

Importantly, within asthmatics there were two main clusters of miRNA expression that correlated with different levels of eosinophil immune cells.

“Eosinophils play very important roles in some kind of allergic reactions, and they might have implications for how people respond to some of the treatments that are already on the market for asthma,” Ishmael said. “We think this may be useful technology to distinguish between some of these different sub-types so we know from the beginning when a treatment won’t work for a patient.”

Ishmael also hopes the research will lead to new asthma treatments. miRNAs are not just biomarkers—some of them are directly involved in the development of disease. Now that a panel of asthma-related miRNAs is emerging, researchers may be able to develop drugs to target these specific molecules.

“We know that a lot of these microRNAs actually have roles in inflammation,” Ishmael said. “Some of them promote inflammation and some of them inhibit inflammation. If you’re lacking one that’s important in maintaining a normal state, you might actually be able to replace that.”

The researchers plan to further investigate the role of different miRNAs in asthma and find out what happens when those molecules are inhibited.

They’re also working to validate the diagnostic value of miRNA testing for asthma in a larger group of people.

“Our goal is to have a blood test for asthma developed in the next five years,” Ishmael said. “You might be able to take a drop of blood from a finger stick and analyze it in the clinic to determine whether someone has asthma at that visit. That would be the ultimate goal.”