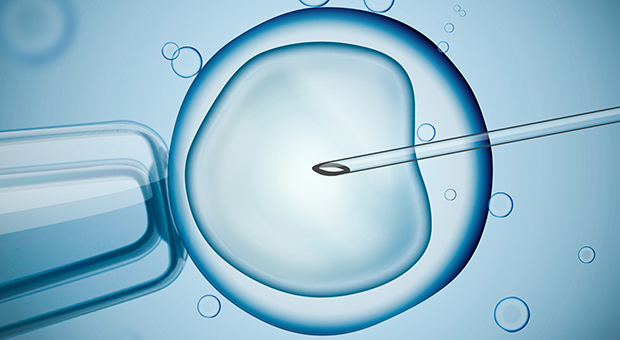 Women with polycystic ovary syndrome (PCOS) who receive frozen embryos during in vitro fertilization have safer and more successful pregnancies than those who get fresh embryos, according to the results of a recent collaboration between Penn State College of Medicine and Chinese researchers.

PCOS is a hormonal disorder that affects up to 10 percent of women of childbearing age. When women with PCOS undergo in vitro fertilization, they have an increased risk of a dangerous complication called ovarian hyperstimulation syndrome. This condition can become fatal, and it may require pain medications, intravenous fluids, hospitalization and additional surgical procedures. Women with PCOS also have a greater risk of other pregnancy complications, including pregnancy loss, preeclampsia – high blood pressure during pregnancy, preterm delivery, low birth weight and birth defects.

Although fresh embryos have been preferred for in vitro fertilization, previous research has suggested that frozen embryos could improve the rate of live births and lower the rates of ovarian hyperstimulation syndrome and pregnancy complications in women with PCOS.

In the new study, which took place at several reproductive medical centers throughout China, 1,508 infertile women with PCOS were randomized to receive either fresh embryos or frozen embryos during their first in vitro fertilization cycle. Results appear today (Aug. 10) in the New England Journal of Medicine.

“Women with PCOS may have a higher chance of a successful pregnancy and may have less ovarian hyperstimulation when you electively freeze all the embryos and perform a frozen embryo transfer than if you do a fresh transfer,” said Dr. Richard Legro, professor of obstetrics and gynecology and public health sciences at Penn State College of Medicine. “This protocol potentially offers immediate benefits to women with PCOS, so practitioners should consider freezing all embryos for these patients.”

The use of hormones and medications to overstimulate the ovaries to release multiple eggs during in vitro fertilization is thought to create a potentially harmful environment for implantation, especially in women with PCOS, Legro said. Frozen embryo transfer allows a woman’s ovary to recover from ovarian stimulation during in vitro fertilization and also gives time for her exposed endometrial lining to shed.

“By electing to freeze all the embryos, you create a healthy environment for the best embryos, as opposed to putting them back in a disturbed environment,” Legro explained.

Frozen embryo transfer was also associated with higher rates of two negative outcomes compared to fresh embryo transfer, the researchers reported. Preeclampsia and neonatal death were more common in the frozen embryo transfer group. However, no patients developed severe preeclampsia pressure during pregnancy and the difference in neonatal death rates was not statistically significant. Both adverse outcomes need to be studied further, according to Legro, who led a team that hosted the Chinese collaborators at Penn State College of Medicine for five weeks as the group wrote the protocol for the multi-center trial and participated in regular steering committee meetings overseeing the trial.