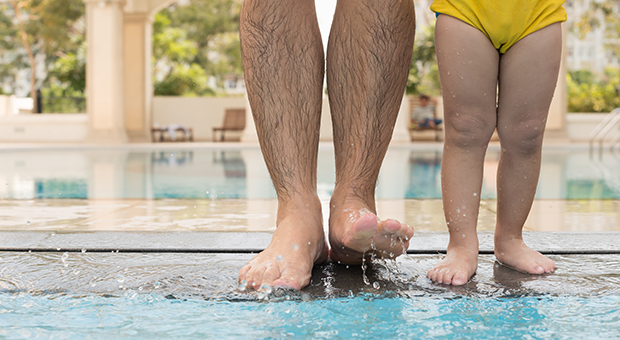 More children are coming to hospital emergency departments this summer for drownings or near-drownings, including at Penn State Health Children’s Hospital, where staff members say they have seen more cases recently than they can recall in several years.

The problem encompasses children of all ages, from toddlers to teens, in both public and private pools and other bodies of water.

“Nearly 800 children drowned last year in the United States,” said Amy Morgan, manager of the Pediatric Trauma and Injury Prevention Program at the Children's Hospital. “When you break that down, it's about two children a day. And for every two children who die, five more visit the emergency department. It's a big problem with potentially devastating consequences.”

Part of the reason for the rise may be misconceptions around how a drowning occurs.

“When someone drowns, it doesn't look like it looks in the movies where a person thrashes around and screams for help. The movies make it look dramatic, and it's really not,” Morgan said.

She ought to know.

Six years ago when her son was 3, Morgan's family was at a friend's swimming pool when her son stood on the side and asked her if he could jump in. Morgan asked him to wait while she got in. During the few seconds it took her to walk into the pool, people started screaming for her to turn around. If they hadn't, she never would have seen that her son had become completely submerged underwater, and she may not have been able to get him out in time.

“It is quite a long period of time from the moment you pull someone from a pool until a first responder can get there,” she said. “Those are vital minutes that oxygen is not getting to the brain. With CPR, you have a better likelihood of survival.”

Another reason for the increase in drownings may be all the extra ways that supervising adults can be distracted. Time devoted to tablets, cell phones, books, magazines, other adults, other children – even running into the house to grab a quick snack or towel – are the seconds in which someone can drown.

“You typically have less than a minute to react once a child goes under water,” Morgan said. “Parenting is a difficult, all consuming job – it's completely understandable that adults need to take a break. However, the pool is a place where we must be vigilant.” Morgan recommends that adult caregivers designate a “water watcher” to monitor everyone in the water at all times.

She said the presence of a lifeguard isn't reason to let your guard down either: “The reality is that lifeguards can't see every child every second in a crowded pool, and they may not see a child in trouble until it's too late.”

Statistics show that children one year and younger drown most often in bath tubs and buckets of water. With older children, the danger most often comes in swimming pools, spas and hot tubs. Teenagers are most likely to find trouble in natural bodies of water such as lakes and rivers.

Just because a child is a strong swimmer doesn't mean he or she can't drown.

“Being able to swim and being able to save yourself are two different things,” Morgan said. “Teens who can swim are at risk too; they are notorious for not thinking through consequences.”

And when teenagers gather – such as at a pool party – ideas of what is safe can become very fluid.

Morgan recommends having a conversation about water safety with your teen, as well as a conversation with the parent of the house where the party will take place, to ensure that parents are present outdoors and watching at all times.

“If not, you may have to make a difficult decision, including not allowing your child to participate,” she said.