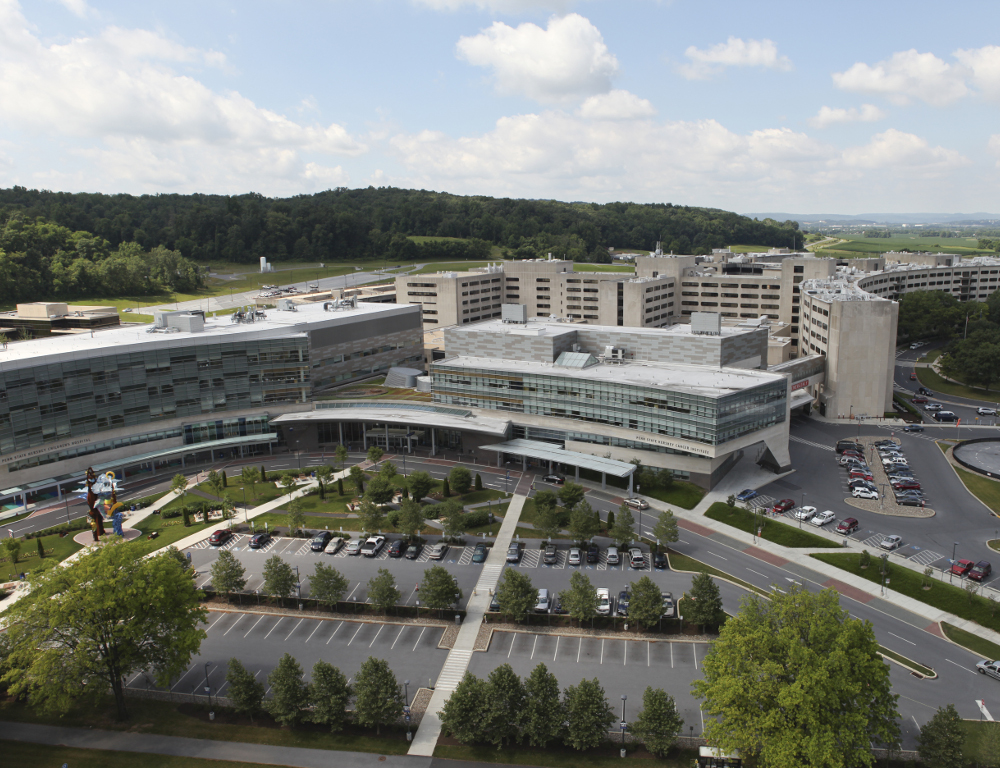 Hillemeier reported that during fiscal year 2016, outpatient visits increased by 6 percent from the previous year to nearly 1.1 million. The Medical Center saw more than 32,000 surgical cases, up 7.2 percent. The organization finished the year with a total margin of 8.6 percent, and provided more than $58 million to support the academic mission of the College of Medicine.

Medical Center and College of Medicine researchers earned a record $109 million in external research funding, an 11.5 percent increase over the previous year. This money supports efforts of faculty and staff to do meaningful scientific studies into the causes, treatments, cures and prevention of disease. Examples of the lifesaving research underway supported by those dollars include:

External research funding also allows Penn State faculty providers to develop and run clinical trials—treatment alternatives that can offer hope for one person today and hope for many others tomorrow. The organization launched Studyfinder this past year, an online tool that allows people to search for studies on a particular health topic or browse all available studies in their area. The Medical Center and College of Medicine offer access to the largest number of locally available clinical trials in central Pennsylvania.

In May 2016, the 46,000-square-foot, $54 million University Technology Center opened on the Medical Center and College of Medicine campus. The facility is the next step toward enabling Penn State Health to utilize “big data” to improve health by using information in the electronic health record and other sources to identify trends, define best practices for care, improve quality and safety, and reduce readmissions. The technology center also will enable groundbreaking research by enhancing collaboration with investigators and scientists at the many colleges at University Park, across the country and around the world.

Telemedicine is another way technology will play an increasingly important role in the future of health care, and Hillemeier noted several ways the organization is using telemedicine and new collaborations to enhance quality and safety, reduce infections and improve patient satisfaction. LionNet, Penn State Health's telemedicine program for stroke, has grown to a network of 16 partner hospitals across the region. Meanwhile, Medical Center dermatologists continue conducting consults via telemedicine, utilizing secure technology that allows providers to send data and images. And the organization launched two additional telemedicine specialty programs this past year, one for ALS patients and one to provide psychiatric consults when needed in the Emergency Department.

Tele-ALS enables ALS patients who have difficulty getting to Hershey to conduct appointments with their care team via a teleconference. The tele-Psych program means patients who arrive in the emergency department with a psychiatric illness can have a consult with a resident physician at Pennsylvania Psychiatric Institute when a psychiatric specialist is not immediately available in the ED.

As part of an “e-ICU” partnership launched in May 2016, Mercy Virtual—the virtual care services arm of Mercy, a Missouri-based health system—will virtually monitor 36 beds in the medical intensive care unit at the Medical Center, enhancing patient safety by serving as a “second set of eyes” for on-site staff in the ICU. Using a phased approach, Penn State Health will add beds in other critical care units to the Mercy e-ICU initiative and incorporate virtual care training in the Simulation Center. The ultimate goal is to create a health care consortium in which the Medical Center will become a Mercy hub for providing virtual care services to other hospitals in central Pennsylvania.

The Medical Center's ongoing commitment to safe, high-quality care was recognized by statewide and national organizations over the past year:

In January, the Medical Center opened its new Pediatric Emergency Department, which includes 12 private treatment rooms as well as equipment and amenities designed for children. The Medical Center has board-certified emergency physicians trained to care for children, and the unit is also staffed by nurses who specialize in pediatrics.

In May 2016, the College of Medicine graduated its 46th class and awarded 144 medical degrees and 88 graduate degrees. Of the medical class of 2016, 32 percent matched to residency programs in Pennsylvania – with more than one-third of those opting to stay at the Medical Center for their residency training. Just over half of the graduates will enter primary care training, helping meet the nation's growing need for internists, pediatricians, family practitioners and dual specialists in internal medicine and pediatrics.

The college also graduated its first class of physician assistants since the start of that new program in 2014. The 30-member class demonstrated the rigor of this in-demand program with a 100-percent pass rate on the physician assistant national exam.

This summer, the College of Medicine's University Park Regional Campus welcomed five “student design partners” who are working with medical educators to develop a new full medical education curriculum in State College that integrates the basic sciences and clinical study. The program's goal is to prepare physicians for the new realities of health care. Currently, more than 50 third- and fourth-year medical students attend the Regional Campus, engaging in their medical clerkships that will help them determine what medical specialties they will focus on during the residency training that follows medical school.

To help meet the demand for physicians in certain specialty areas, the College of Medicine launched accelerated education programs in family medicine, internal medicine, emergency medicine, orthopedics and neurosurgery. These “3+3” programs offer students who have already identified a medical specialty area a three-year medical education program followed by a slot in a three-year residency program at the Medical Center. This program model can reduce some of the stress of uncertainty that can come with medical training, as well as reduce the cost of earning a medical degree.

The College of Medicine initiated two new graduate programs for medical scientists in 2016: The MD/MPH dual degree, which allows students to earn their medical degree and a master of public health degree, and a doctor of public health program, or DrPH. The DrPH program is designed to develop leaders in public health who will create and implement solutions to public health problems. It prepares graduates to pursue career opportunities in federal, state and local government, as well as in non-profit, academic and private sectors.

More than 70,000 student volunteers in 235 schools across five states teamed up to raise $5,526,281.63 to fight childhood cancer through Four Diamonds Mini-THONs during the 2015-2016 school year — a $1.3 million increase from the previous year. Mini-THONs are modeled after Penn State IFC/Panhellenic Dance Marathon, or THON, the world's largest student-run charity. This new wave of philanthropy has raised more than $23 million since 1993. Like the money raised each year by THON, money raised by Mini-THONs is used to drive the discovery of new and improved treatments for childhood cancer, through funding more than 70 pediatric cancer research team members at Penn State College of Medicine; and to ensure that every child is treated for cancer at Penn State Health Children’s Hospital without any out-of-pocket costs for their families.

But I’m tired, why should I exercise?