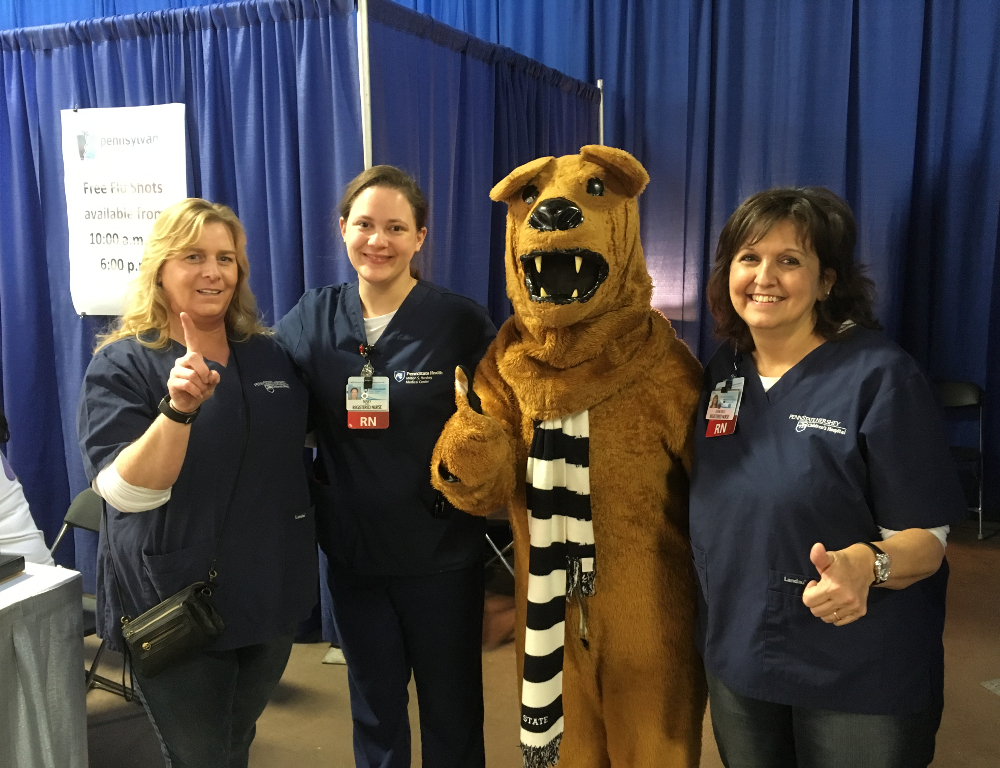 By the time the annual Pennsylvania State Farm Show rolls around, Greg Lebo usually still hasn't gotten his flu shot. The Carlisle man sought out the Pennsylvania Department of Health booth on Wednesday, where Penn State Health nurses were giving flu shots, so he could get it done for free while enjoying the Farm Show.

He isn't the only one.

Lori Bechtel, nurse manager for employee health and safety at Penn State Health, said she was surprised at the number of people who came by the booth saying they haven't gotten their annual flu shot.

“It's in the news now that we are starting to see flu cases, so people can't put it off anymore,” she said.

Penn State Health partnered with the Department of Health to supply 2,500 doses of the flu shot for Farm Show week. Approximately 700 flu shots were administered during just the first four days of the event.

Judy Dillon, Penn State Health's director of community health, said such partnerships are important to help the organization achieve its mission of public health and community outreach. She said the flu shot can keep people from getting the flu, and can lessen the severity of contracted cases.

“Not only do you protect yourself when you get it, but you are protecting your loved ones and those around you,” she said. “The more people who get a flu shot, the fewer cases of the flu we will have.”

Bechtel said this year's shot is a good match for the strain of flu that is circulating, so it is very effective.

“The flu spreads very easily, and you are contagious before you have symptoms,” she said. “Having good hand hygiene and getting a flu shot are the best ways to keep it from spreading in our very social community.”

Thirty-two nurses from Penn State Health, along with the Nittany Lion, volunteered their time to staff the Farm Show booth from 10 a.m. to 6 p.m. Dillon said she had all of the shifts filled and was putting staff on waiting lists within three days of sending out a request for volunteers.

“Community service is part of our advanced professionalism,” Bechtel said. “Plus, it's just the right thing to do.”

Penn State Health has focused on offering flu shot clinics on its medical campuses and in underserved communities to reach people where they live. The organization held drive-through clinics in both Lebanon and Steelton this season and offered flu shots at several area food banks.

The Farm Show, which saw attendance of about 400,000 last year, is a great way to reach people at a place where they are planning to be anyway.

Joanne Ranck Dirks of Lancaster didn't know she could get a free flu shot at the Farm Show, but stumbled upon the booth while on her lunch break.

“I kept driving by my pharmacy this season and just never got around to stopping and going in to do it,” she said. “So when I walked by, I thought this was too good to pass up.”

Flu shots will be available until 6 p.m. Friday and from 10 a.m. to 5 p.m. Saturday at the Department of Health booth located in the Main Exhibit Hall.