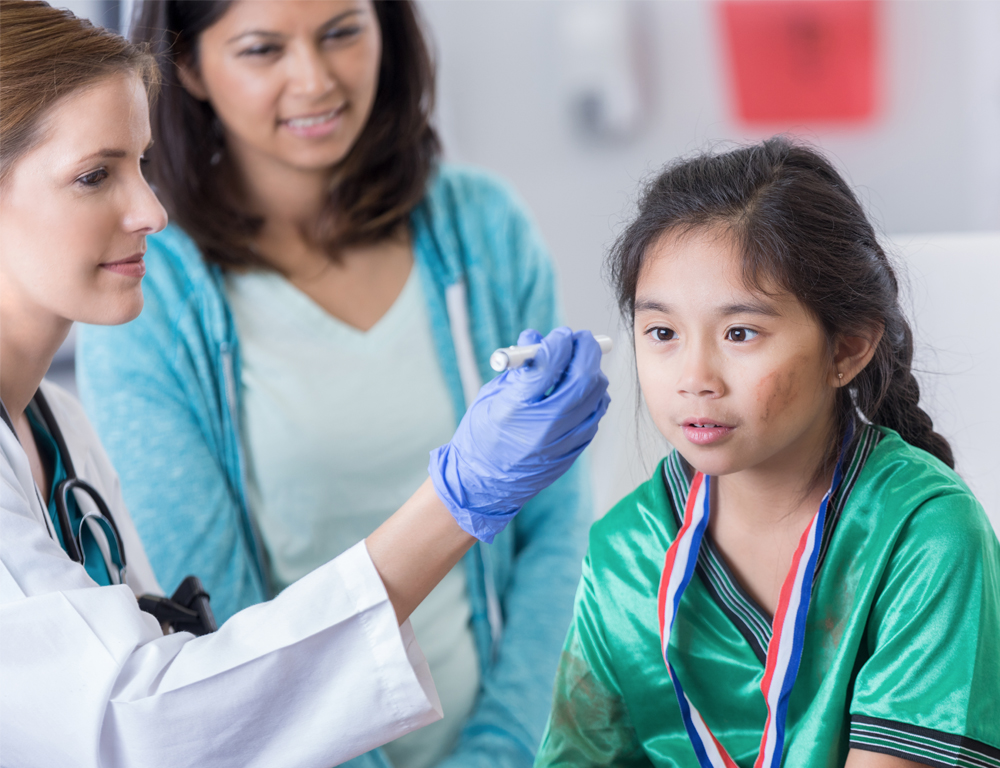 Diagnosing a concussion can sometimes be a guessing game, but clues taken from small molecules in saliva may be able to help diagnose and predict the duration of concussions in children, according to researchers at Penn State College of Medicine.

Researchers measured the levels of microRNAs — tiny snippets of noncoding RNA — in the saliva of concussion patients. They found that the presence of certain microRNAs in saliva was able to better identify concussions and more accurately predict the length of concussion symptoms than relying solely on patient surveys.

Dr. Steven Hicks, an assistant professor of pediatrics, said the findings — published today in JAMA Pediatrics — could result in a more fact-based way to diagnose and treat concussion patients.

“There's been a big push recently to find more objective markers that a concussion has occurred, instead of relying simply on patient surveys,” Hicks said. “Previous research has focused on proteins, but this approach is limited because proteins have a hard time crossing the blood-brain barrier. What's novel about this study is we looked at microRNAs instead of proteins, and we decided to look in saliva rather than blood.”

Concussions usually occur after a blow to the head — for example, during sports or a car accident. They can result in such symptoms as headache, nausea, confusion, amnesia or lack of consciousness. While most concussions clear up within two weeks, about one-third of patients will experience symptoms longer.

Patients are usually advised to rest and stay away from such physical activity as sports or gym class until their symptoms subside. Hicks said that while it is important to give the brain enough time to heal, it is difficult to accurately predict how long patients should rest.

“As a general pediatrician, I often see children with concussions,” Hicks said. “The tools we use to diagnose and manage concussions are subjective — we do a physical exam and then have them answer a survey about their symptoms. Then, we make an educated guess about how long that child might continue to have a headache or feel nauseous. But those guesses aren’t evidence-based and aren't always accurate.”

MicroRNAs are found throughout the body and affect how genes are expressed depending on different conditions, like disease or injury. The researchers suspected these biomarkers might be able to predict the presence and length of concussions.

The researchers recruited 52 concussion patients between the ages of 7 and 21 for the study. Each participant was evaluated using the Sport Concussion Assessment Tool (SCAT-3) — a common tool that doctors use to inventory concussion symptoms and severity — within two weeks of their injury. The researchers also asked the patients' parents for their observations about their children's symptoms. This assessment was repeated four weeks after the injury occurred.

In the study, the researchers also collected saliva from each participant and analyzed for levels of different microRNAs. They then compared the microRNA profiles to the patient's symptoms at both the initial and follow-up assessments.

“The microRNAs were able to predict whether symptoms would last beyond four weeks with about 85 percent accuracy,” Hicks said. “In comparison, using the SCAT-3 report of symptoms alone is about 64 percent accurate. If you just go off the parent's report of symptoms, it goes down to the mid-50s. In this pilot study, these molecular signatures are outperforming survey tools.”

Hicks said predicting the length of concussions as early as possible would help ensure patients get the right care and advise patients and parents on how long to expect symptoms to continue. For example, if a doctor knew a patient was going to have prolonged symptoms, they might put the patient on medicine right away instead of waiting to see if symptoms clear up on the own.

While more studies are needed, Hicks said he is hopeful that measuring microRNAs in saliva could one day be an accurate, quick way to diagnose and manage concussions.

“The ultimate goal is to be able to objectively identify that a concussion has happened and then predict how long the symptoms will go on for,” Hicks said. “Then we can use that knowledge to improve the care that we provide for children who have concussions, either by starting medicine earlier or holding them out of activities for longer.”

The Children's Miracle Network and Quadrant Biosciences supported this work.