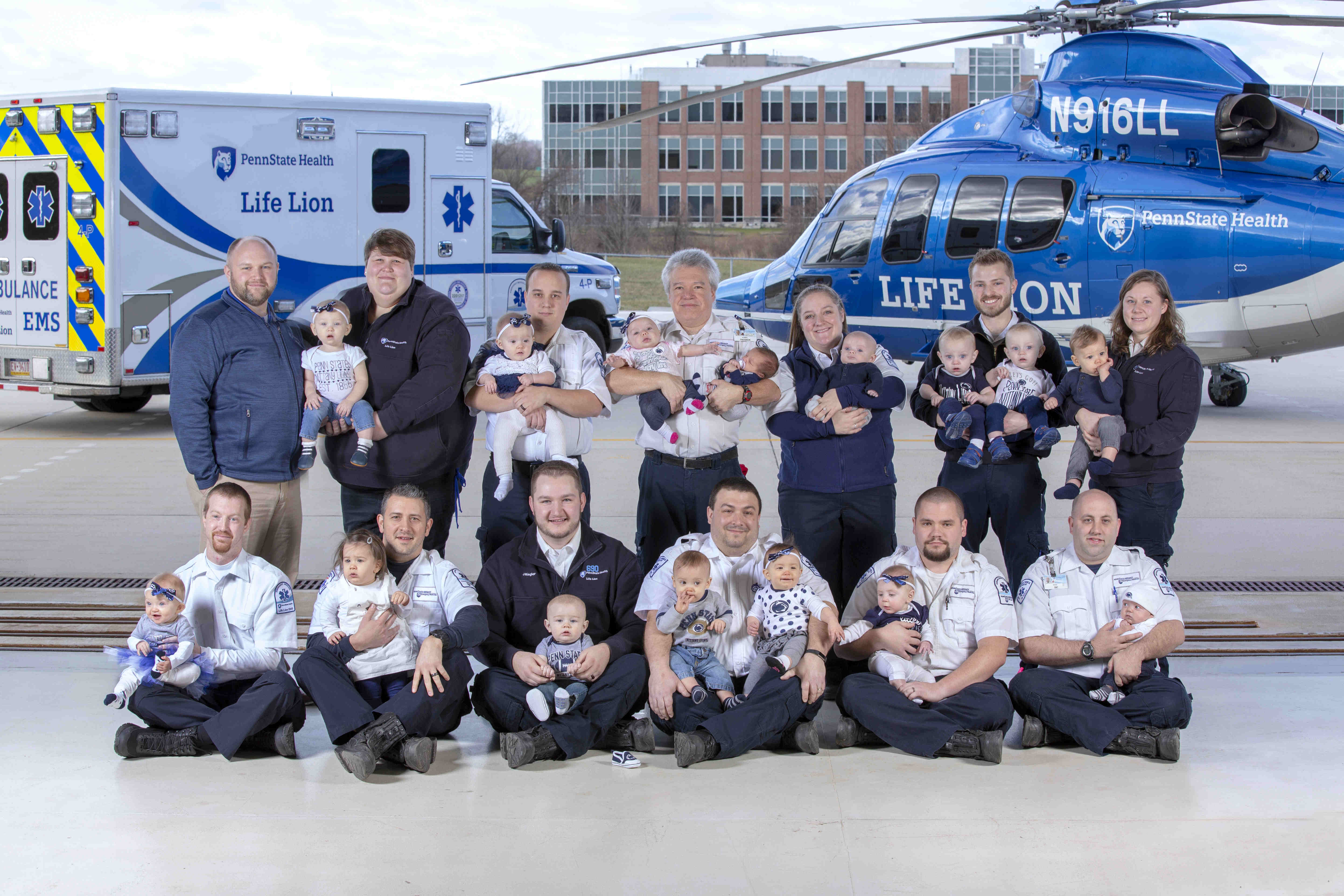 In November 2017, when Chris Breneman, a supervisor at Life Lion EMS-Berks County, and his wife welcomed a newborn into their family, it spurred a baby stampede that crashed through Berks and Dauphin counties for more than a year. It stopped (if it ever really stopped) when Hershey Paramedic Robert McCreary and his wife adopted a newborn less than two months ago.

In the end, Life Lion employees had 15 newborns.

Eight were girls, and seven were boys. That includes two sets of twins.

“It’s just a whole other lifestyle now,” said Mike Pribila, a paramedic from Life Lion EMS-Dauphin County. In his arms, his 7-month-old daughter, Madisyn, attempted to tug the red goatee from his chin. He and all the parents and babies gathered Jan. 10 at the helicopter hangar on the Penn State Health Milton S. Hershey Medical Center campus for a group photo.

The moms and dads talked shop, diapers and insurance and swapped the kinds of jokes you’d expect (“What are they putting in the water there? Heh heh.”)

The babies bounced on knees, gaped at light fixtures or drooled on fingers jammed into gummy smiles.

“This is Grayson,” said Tim Mihoerck, a paramedic with Life Lion EMS-Dauphin County. He held up a smiling baby.

“No, that’s Bennett,” said his wife, Corisa. In her arms she held the baby’s doppelganger. “You gave me Grayson.”

“Oh,” Tim said, reddening. The baby wave was particularly generous to the Mihoerck household 13 months ago, when it left them identical twins.

“The hardest part is the logistics of taking them place to place,” Tim said. A trip to the grocery store, for example, he said, becomes a logistical problem. Can you guide a stroller and a cart down the aisle?

“And the sleep,” Corisa said.

For others, work hours were the big adjustment. Jeff Ringler, an emergency medical technician from Life Lion-Berks County, shifted from day shift to night shift when his baby son arrived. His wife works as a receptionist at a dental office. “She comes home from work. I go to work,” he said. “We spend as much time together as we can.”

But with so many co-workers having kids, there’s plenty of people around who can relate. Conversations at work have shifted to child development, Ringler said. “They’re all a within a year of each other. When one starts crawling, another will start crawling soon,” he said. “And…there’s hand-me-down clothes.” For Robert McCreary, a paramedic with Life Lion EMS-Dauphin County, all of it is old hat. In his arms he held London, his adopted 3-month-old daughter. Nearby, his wife held their most recent addition, a 1-month-old boy.

The couple has adopted 13 children over the years.

“It just keeps getting better and better as you watch them grow up,” he said.

EDITORS: A high-resolution version of the group photo can be downloaded here.

A change of holiday heart: College of Medicine staffer gets unexpected surprise