Increase in resolution, scale takes CT scanning and diagnosis to the next level 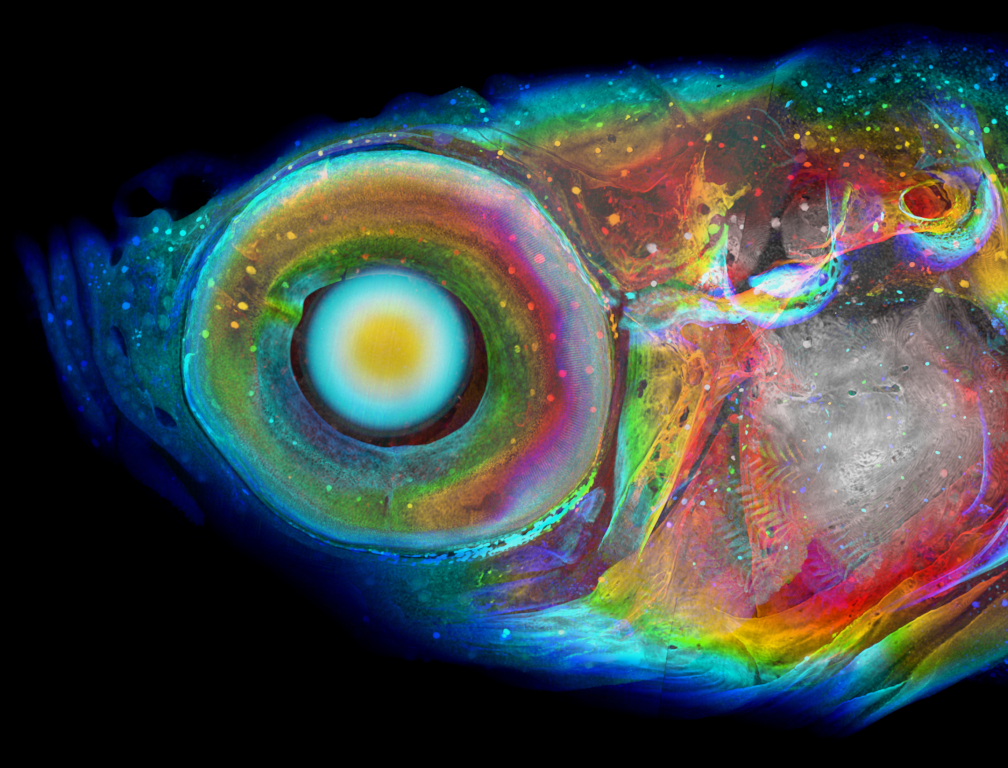 This zebrafish has been imaged using a new CT method, with colors assigned to structures based on their depth within the fish. The work resulted in a 2019 publication in eLife.

To diagnose and treat diseases like cancer, scientists and doctors must understand how cells respond to different medical conditions and treatments. Researchers have developed a new way to study disease at the cellular level.

Dr. Keith Cheng, distinguished professor of pathology, pharmacology and biochemistry and molecular biology at Penn State College of Medicine, and a team of X-ray imaging physicists at the University of Chicago, have developed a new, 3D tissue imaging technique, called X-ray histotomography. The technique allows researchers to study the details of cells in a tissue sample without having to cut it into slices. And that could lead to better diagnosis and treatment for a variety of diseases, including cancer.

“The quantitative and objective measurements made possible by histotomography could potentially allow us to distinguish between subtypes of cancer and other diseases that presently look the same using traditional histology so that they may be more appropriately treated,” Cheng said.

Traditional histology involves taking thin slices of tissues from patients, staining them, and examining them for irregular features under a microscope. Physical sectioning of the sample introduces tissue loss and distortion that leads to incomplete sampling and imperfect visualizations. According to researchers, X-ray histotomography avoids these problems and allows the three-dimensional features of cells like shape and volume to be measured accurately.

Over ten years, Cheng and his team developed the technique by combining the principles of human computer tomography (CT) scanning and histology to image small organisms and tissues at a greater resolution in 3D.

“X-ray histotomography uses the same principles as a human CT scan,” Cheng said. “CT involves shooting a series of X-rays of a subject, each at a slightly different angle. A computer program then uses the set of x-rays to create a 3D image.”

The Cheng lab had previously used micro-CT, a smaller-scale version of human CT, to image small organisms and tissues. University of Chicago’s Patrick La Rivière, associate professor of radiology, introduced Cheng to the use of a powerful X-ray source, the synchrotron, which allowed the research team to enhance their micro-CT scanning with increased resolution and faster imaging times. The synchrotron-based micro-CT might help pathologists someday answer questions like:

The technology needed to answer questions like those was not available commercially, Cheng said, so he and a team of engineers, physicists, data scientists and biologists set out to develop the technique themselves.

After a decade of optimizing the sample preparation and imaging, the team created 3D reconstructions of young zebrafish that can be examined from the whole organism down to a cellular level. Zebrafish were chosen to develop this technology because their size from larvae to adults is nearly the same as samples used by physicians to evaluate cancerous tumors.

According to Cheng, researchers and clinicians can now examine features like 3D shape, volume, location and number of cells that previously couldn’t be studied using traditional histology. The technique will allow pathologists to study a full tissue sample after it has been stained and prepared. It is no longer necessary to cut a single slice of tissue out of the entire sample.

Clinical scientists can evaluate microscopic and three-dimensional features of cells due to the increased clarity and resolution of the images.

“The beauty and complexity of the tissue I saw was mind-bending,” Cheng said of the images released in the journal eLife with the research on June 11.

Computational tools combined with the imaging allow the size, shape, volume, and density of cells to be calculated and cataloged. This ability enables the characteristics of disease pathology to be studied in a novel way that may improve clinical care and facilitate drug discovery.

Advances in computer technology allow the large image files of the zebrafish – at 100 gigabytes each – to be processed and viewed. Researchers can examine the traits of disease at the organ system, tissue or cellular level simultaneously, slice-by-slice or in 3D context. They may even be able to see and interact with the cellular structure of organisms using the same technology used by virtual reality gamers.

Future research by the Cheng team aims to increase the resolution, sample size, throughput, analytical power and accessibility of the technique.

The authors declared no conflict of interest.