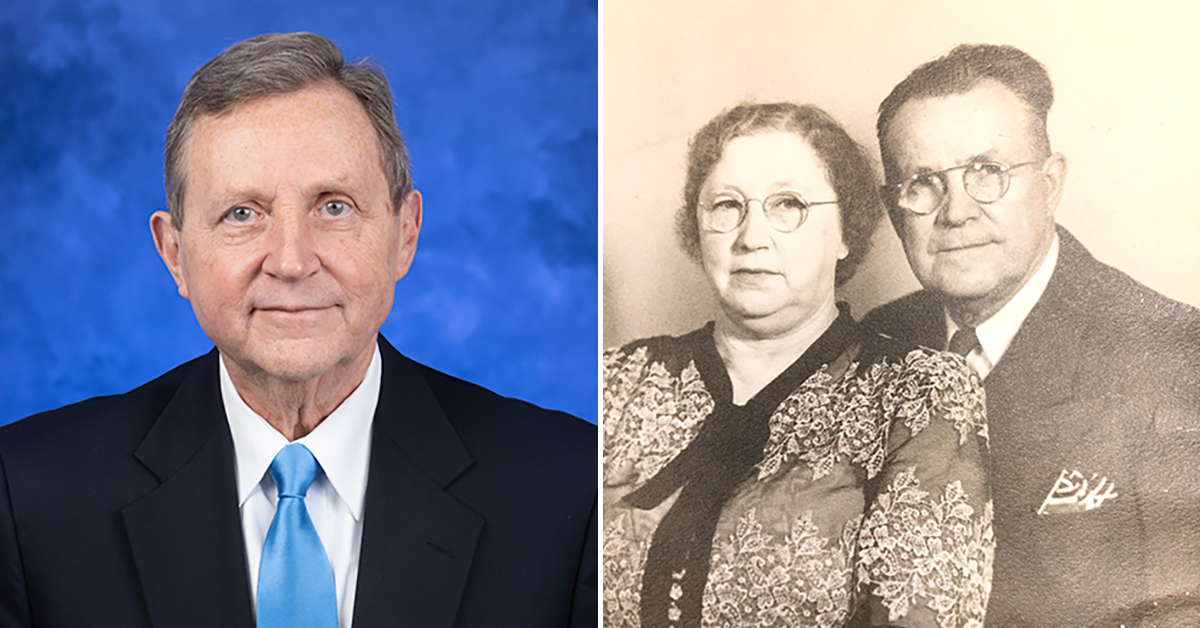 Dr. Robert Harbaugh, professor and chair of neurosurgery and senior vice president of Penn State Health Medical Group, and Dr. Kimberly Harbaugh, professor of neurosurgery and chief of the Division of Peripheral Nerve Surgery, are renowned and highly regarded neurosurgeons today, but pursuing a career in medicine didn’t always seem like a realistic goal for either physician. Both were the first in their families to attend college, which presented financial hardship given their blue-collar upbringings. With gratitude for the support and financial assistance they each received along the way, the couple wanted to pay forward similar opportunities for students who have promise and passion but limited resources.

In 2018, the Harbaughs participated in Penn State College of Medicine’s Scholarship Matching Program, giving $100,000 to establish the Curvin and Ida Kinard Scholarship in honor of Robert’s maternal grandparents, with whom he lived for many of his early childhood years due to his family’s financial difficulties.

“My grandfather had no formal schooling beyond eighth grade,” said Robert Harbaugh, “but he was well-read and even taught himself to read Latin. He and my grandmother had great respect for education, and they instilled in me the belief that I could do anything I wanted if I was willing to work for it.”

“The College of Medicine gave me two really big opportunities,” Robert Harbaugh recalled. “First, it accepted me as a medical student, and then it gave me the chance to be a department chair. I can’t imagine how different life would be without those opportunities.”

As leaders in the Department of Neurosurgery and mentors to many students, residents and fellows, Robert and Kimberly Harbaugh also understand the specific challenges that today’s trainees face—especially related to financial strain. Their intent in establishing the Curvin and Ida Kinard Scholarship was to support medical students interested in pursuing a career in neurosurgery—in particular, those who apply and get accepted to the department’s 3+7 accelerated pathway program. This program allows students to complete medical school in three years, followed by seven years of neurosurgery residency training at the Milton S. Hershey Medical Center.

Establishing the scholarship in this way provides multiple benefits. First, award recipients in the accelerated track avoid paying a fourth year of tuition and maintain relationships with trusted mentors through the department’s residency program. At the same time, the Medical Center—and more importantly, its patients—benefit from the knowledge, expertise and longevity of these well-trained neurosurgery students and residents. National trends also indicate that trainees are more likely to remain in the geographic area of their residency for their future practice, so the Curvin and Ida Kinard Scholarship will undoubtedly impact more lives than just the students who receive it.

In 2018, the scholarship was awarded for the first time to one student, and to two students this academic year (2019-2020). Expressing the impact this scholarship has made for him over the last two years, David Hallan said, “I am grateful for not only the monetary support, but also the personal support I’ve received from the Harbaughs throughout my medical education—both before I was in the 3+7 program and now that I am in it.” Scholarship support relieves some of the financial burden for students, but it also represents a tremendous vote of confidence. “I will continue to work hard to fulfill the trust the Harbaughs have placed in me to become a great neurosurgeon,” Hallan said.

Thanks to the College of Medicine’s Scholarship Matching Program, which ran from July 2016 through December 2018, the Harbaughs’ scholarship was established at a value of $200,000. During the matching timeframe, alumni, friends, corporations, foundations, faculty and staff committed a total of $6.2 million to establish 37 new scholarships and enhance 59 already existing scholarship endowments. With the match, this means $12.4 million will be added to the College of Medicine’s total scholarship endowment, nearly doubling it and making an additional $500,000 available each year to support medical, graduate and physician assistant students.

“We are committed to developing physicians, scientists and scholars who will shape the future of health care and supporting their academic pursuits,” said Dr. Kevin Black, interim dean of Penn State College of Medicine. “The Harbaughs’ financial investment in our students sets an example for all members of our learning community to follow, and their personal leadership exhibits a standard of excellence for students to emulate.”

The Harbaughs’ gift to create the Curvin and Ida Kinard Scholarship advances “A Greater Penn State for 21st Century Excellence,” a focused campaign that seeks to elevate Penn State’s position as a leading public university in a world defined by rapid change and global connections. With the support of alumni and friends, “A Greater Penn State” seeks to fulfill the three key imperatives of a twenty-first-century public university: keeping the doors to higher education open to hardworking students regardless of financial well-being; creating transformative experiences that go beyond the classroom; and impacting the world by fueling discovery, innovation and entrepreneurship. To learn more about “A Greater Penn State for 21st Century Excellence,” visit greaterpennstate.psu.edu.