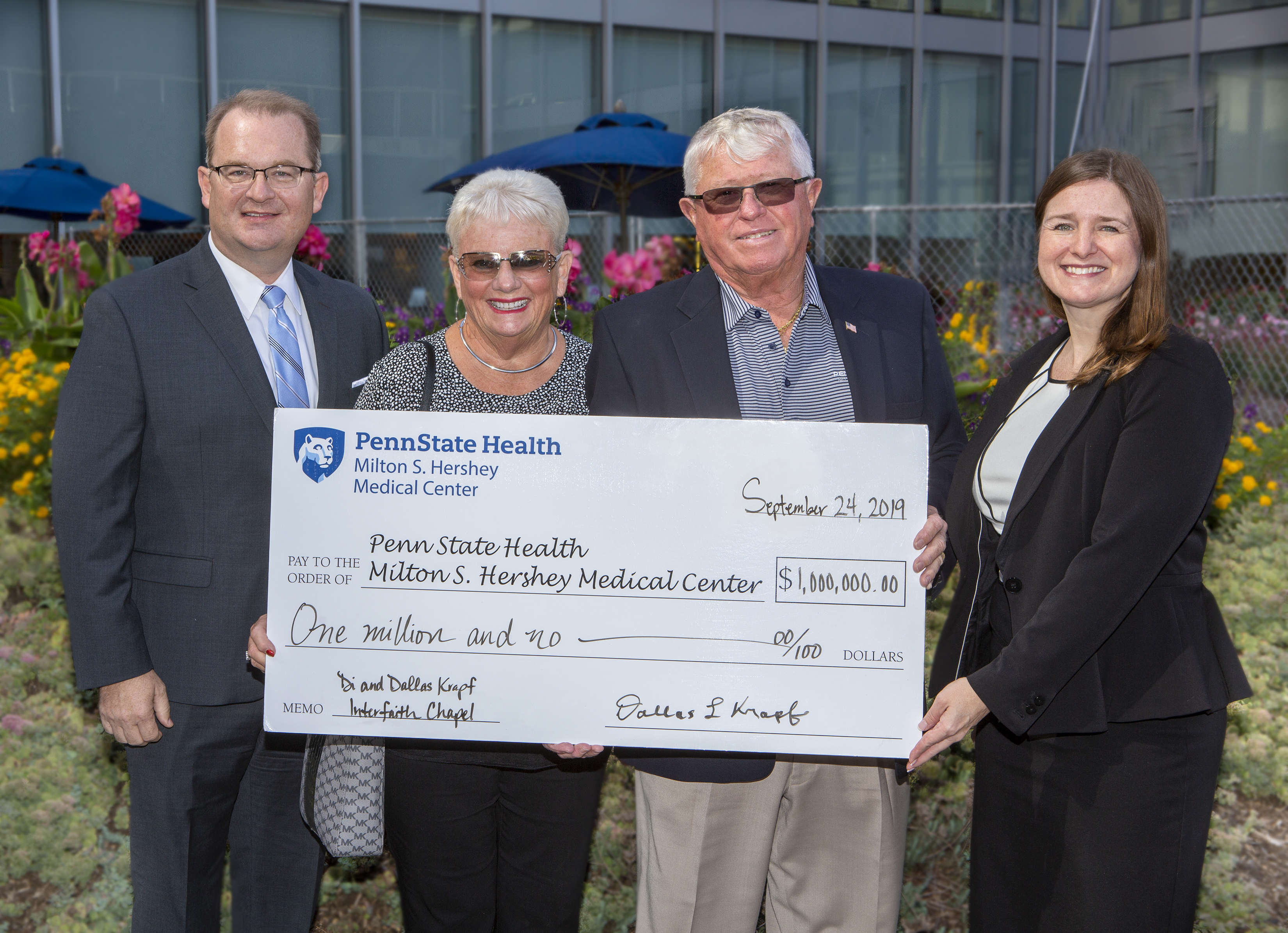 At a check ceremony on Sept. 24, Di and Dallas Krapf (center) presented a check to name the future Di and Dallas Krapf Interfaith Chapel to David Simmons, director of pastoral services (left) and Deborah Berini, president of Penn State Health Milton S. Hershey Medical Center (right). The group is standing in the courtyard, adjacent to where the chapel will be built.

The Krapf family is already the strongest individual supporter of Pastoral Services at the Milton S. Hershey Medical Center, having established the Krapf Family Endowed Fund to support the program in 1998. “After my dad’s accident in 1992, my family wanted to give back to the hospital to express our gratitude and make sure other patients and families could receive the same kind of care we did,” said Dallas Krapf.

Krapf’s father, George, was transferred to Hershey from a hospital in Canada following a life-threatening snowmobile accident. He spent more than 80 days at Hershey Medical Center, and the family credits the medical team for saving his life and restoring his health. For almost three months, the Medical Center became a second home to the Krapf family, who relied on their faith to carry them through and offer hope.

“My mom was a very devout Methodist,” Krapf recalled. “When she wasn’t by my dad’s side, she spent time in the prayer chapel, and we all deeply appreciated the visits we received from the pastoral care staff.”

For more than 20 years, family and friends have continued to support the Krapf Family Endowed Fund in Pastoral Services. When Dallas’ sister, Millie Krapf Fails—an alumna of Penn State—passed away in 2006, memorial contributions were also directed to the fund, which has now grown to more than $300,000.

The Krapfs’ gift to build the new interfaith chapel further exemplifies their family’s longstanding support for pastoral services at the Medical Center. “It was important to us to honor my parents’ memory and express our gratitude in a tangible way that will benefit many others for years to come,” Krapf said. “We’re proud that our family name will permanently be connected to the chapel and the spiritual care that was so meaningful to us.”

The current chapel, located behind the main surgical waiting area on the first floor of the hospital, serves as a place where patients, families, students and staff of all faiths can seek respite, participate in weekly religious services, including Catholic mass on Tuesdays and Islamic Jumu’ah prayer on Fridays, celebrate joyous occasions or memorialize loved ones who have died in the hospital. Over the years, the chapel has also served as the site of special events like weddings, baptisms, Blessing of the Hands services, Ash Wednesday blessings, recognition and retirement ceremonies, and military commissioning and promotions. It is open at all times, and chaplains are available 24 hours a day, seven days a week to provide spiritual, emotional and sacramental support.

“Although our pastoral services team provides thousands of hours of patient and staff support each year in clinics, patient rooms and departments throughout the hospital, the chapel stands as the central place for prayer and meditation and the visible home for our team’s spiritual care,” said David Simmons, director of pastoral services.

A need to expand clinical services on the first floor of the hospital, coupled with a desire to enhance the current footprint and accessibility of the chapel, made building a new facility a priority project for Hershey Medical Center. The new chapel will be prominently located in the courtyard just off the main entrance of the hospital, providing greater and more convenient access for all guests, faculty and staff.

“We are deeply grateful to Dallas and Di Krapf for their extraordinary generosity to build this new interfaith chapel, which is such an integral part of the care we provide,” said Deborah Berini, president of Hershey Medical Center. “The prominent location of the new building signifies the priority we place on providing care.”

The chapel is also an important place for physicians, nurses, residents, students and other caregivers. “In a profession like healthcare that has high stress and burnout rates, the chapel is often the first stop for many of our employees to center themselves at the beginning of a shift or before leaving work,” noted Simmons.

In addition to their support for Pastoral Services and the new chapel building, the Krapf family previously donated a stained glass piece depicting Mount Nittany, in memory of their parents and grandparents, Eleanor and George Krapf, Jr. The art is part of the Medical Center’s permanent collection and provides a peaceful backdrop for visitors in the main hospital waiting area on the first floor.

Building a Legacy of Generosity

While the Krapfs’ leadership commitment to build the Di and Dallas Krapf Interfaith Chapel at Hershey Medical Center was inspired by their personal experience at the hospital, their loyalty to Penn State predates Dallas’ father’s accident in 1992. In fact, the family says their love of Penn State and trust in the institution helped them make the difficult decision to have George transferred to Hershey in the first place.

Besides the fact that two of Dallas’ sisters graduated from Penn State, the Chester County native has also been a Nittany Lion football fan since he began attending games with his brother in the early 1970s. Dallas has held football season tickets since 1972, and he and his wife also have season tickets for wrestling, basketball and hockey. The couple has supported the Lasch Building, home of the football program, and Penn State baseball’s Medlar Field at Lubrano Park.

Beyond Hershey Medical Center and athletics, the Krapfs have long supported Penn State Great Valley, the campus closest to their home, including gifts to name the alumni building on campus, support scholarships and dedicate a piano in memory of Dallas’ sister, Millie, among other contributions.

They’ve given to the University Libraries and Special Olympics, in honor of Sue and Joe Paterno. And in 2016, the Krapfs acted on their passion for education and the military by making a commitment to establish the Dallas and Diane Krapf ROTC Outstanding Leadership and Service Scholarship. Dallas is a veteran of the United States Army. This scholarship will support undergraduate students who have demonstrated excellent academics and leadership potential through community involvement and are enrolled, or plan to enroll, in any of the Reserve Officers’ Training Corps (ROTC) programs at Penn State.

“Although Dallas never completed a college degree following his military service, he and Di clearly bleed blue and white,” said Kelly Altland, associate vice president for development and chief development officer at the Medical Center and College of Medicine. “It’s safe to say they are among the most loyal and generous Penn Staters.”

This latest gift from Dallas and Di Krapf to build the interfaith chapel will advance “A Greater Penn State for 21st Century Excellence,” a focused campaign that seeks to elevate Penn State’s position as a leading public university in a world defined by rapid change and global connections. To learn more about the campaign, visit greaterpennstate.psu.edu.