Don Donagher paid for a plane to fly over Hershey Medical Center for an hour to thank Dr. Baldeep Wirk and the staff at Penn State Cancer Institute for saving his wife Lynda’s life. She was battling stage four lymphoma.

When they want to show their appreciation to a doctor, most patients send a thank you card – Lynda and Don Donagher sent an airplane.

Below, Dr. Baldeep Wirk, an oncologist at Penn State Cancer Institute on the Hershey Medical Center campus, smiled and told reporters it was a “huge surprise” unlike any other thank you she’s received.

“I’m very deeply honored,” she said. “For a doctor, there is no greater reward than when patients honor you. It’s priceless.”

“My wife is alive – it’s a miracle, I tell everyone who will listen – and a simple thank you wasn’t enough,” said Mechanicsburg resident Don Donagher, who rented the plane from an aerial company in New Jersey. “We want to publicly say thank you for your patience, your kindness, for everything.”

Lynda Donagher was diagnosed with stage 4 lymphoma late last year after eight months of dealing with stomach discomfort and pain and seeing several different specialists elsewhere. After being diagnosed at Penn State Cancer Institute in late November, she underwent surgery by Dr. Scott Armen of Penn State Health Surgery Specialties to remove a tumor on her intestines.

She spent the next four months at Hershey Medical Center, fighting the disease with chemotherapy and the expertise of Penn State Cancer Institute staff, along with the tenacious support of her husband, who was by her side every day until COVID-19 changed the visitor policy, she said.

“Dr. Wirk kept encouraging me,” Lynda Donagher said. “I’d hear heels clicking in the hall outside my room, and then Dr. Wirk would appear out of the blue and talk for a couple of minutes. She didn’t have to do that, but she did, and I was very grateful.”

Wirk praised Lynda, saying she made her job easy by following instructions and being a “wonderful” patient.

“From where she began to where she is now is quite remarkable,” Wirk said.

Lynda Donagher is scheduled to receive her last chemo treatment next month.

Wirk said she knew that Don Donagher is an avid pilot because after COVID-19 restrictions prohibited him from visiting his wife in her room, he flew his helicopter past her hospital window almost daily.

Lynda Donagher said she wasn’t surprised when her husband rented the plane and a banner as a thank you – he did it once before in Florida to honor a doctor for his own care – but she was happy to give public recognition to the medical center for a job well done.

“I don’t know where I would have been otherwise,” she said. 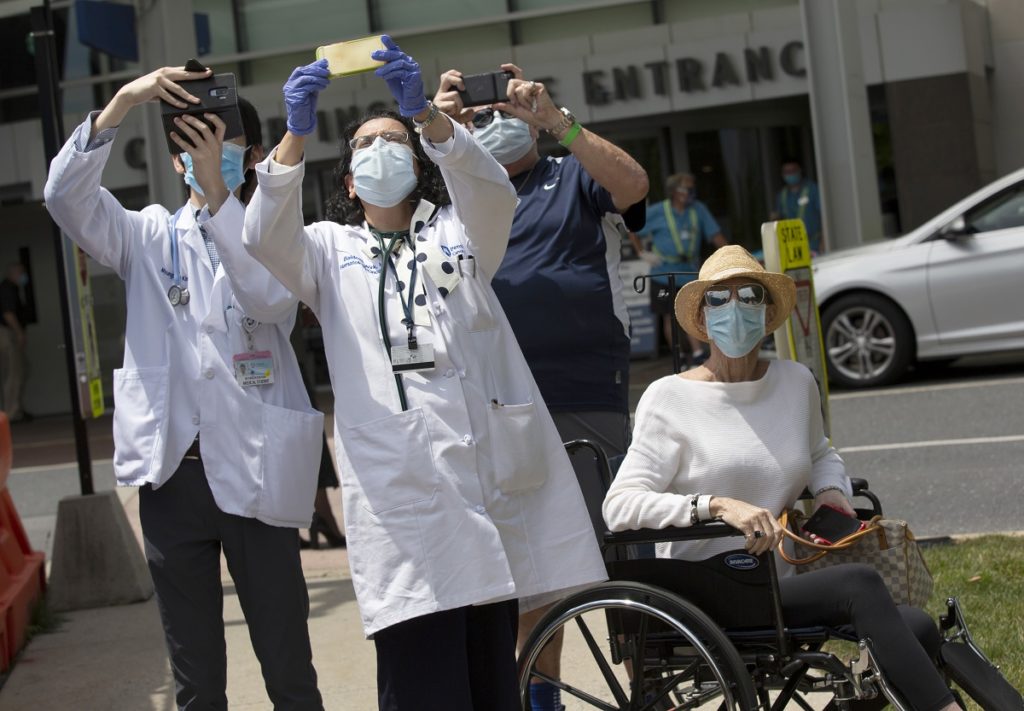