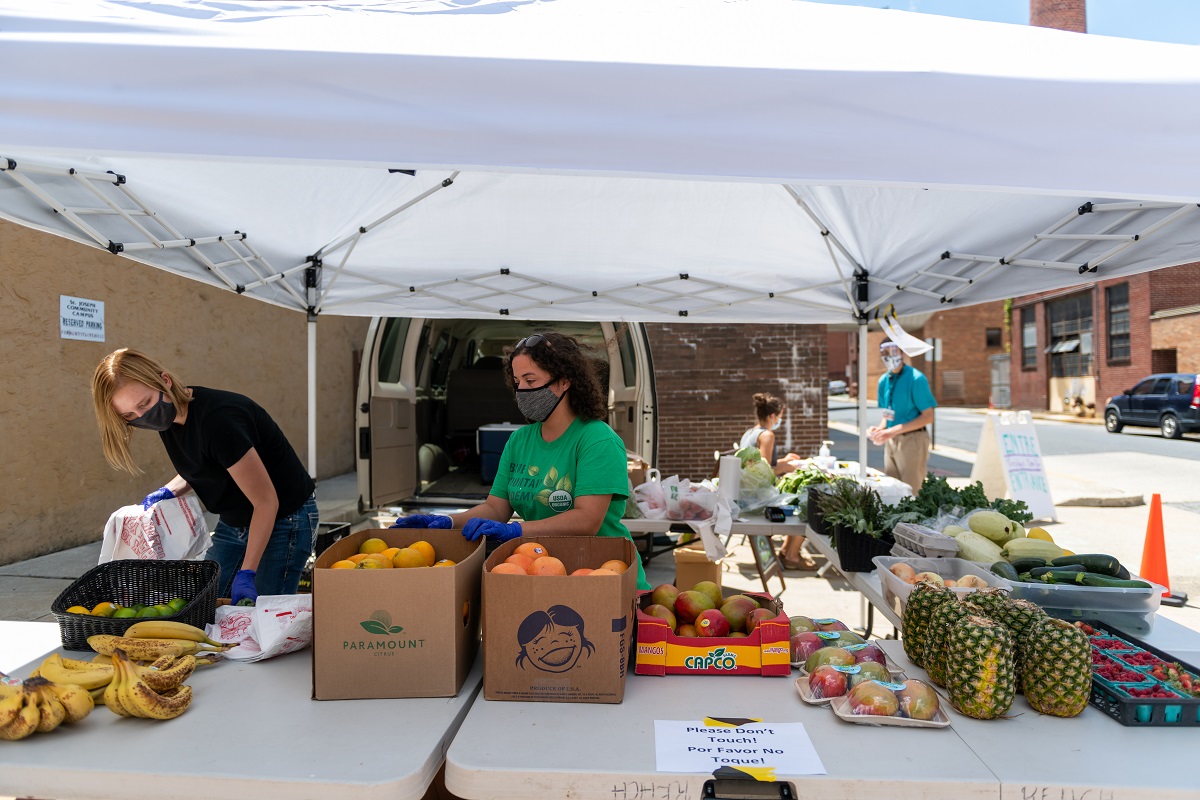 He’s lived on both coasts and plenty of places in between, but for the past quarter-century, Reading has been home.

He loves the city’s treasures, from the curled rooftops of the Japanese-style Pagoda on the east side to the sprawling glass and brick of the downtown Santander Arena and Performing Arts Center. And on Tuesdays, Kazin nearly always waits in line at one of Reading’s more recent gold mines – the Blue Mountain Academy farm stand outside Penn State Health St. Joseph Downtown Campus.

Piles of produce on a handful of tables might not attract tourists, but for residents like Kazin it’s something more important — a solution. The farm stand offers more than healthy snacks for low prices. It’s a difference-maker for diabetics. It’s an answer for the many neighborhood families worried about what they will have for dinner tonight or whether there will be dinner at all.

And it’s one of many ways St. Joseph, Penn State Berks, Penn State College of Medicine and others are changing lives in Berks County.

On this Tuesday, Kazin’s mouth watered behind his surgical mask. He and the rest of the small crowd at the farm stand wore them avoid spreading COVID-19. He browsed the watermelon, oranges and green peppers and gathered a variety he loaded into bags for the short walk home, just a few blocks away.

“The fruit is always fresh,” he said. “The prices are always reasonable.”

This oasis appears in the heart of what community organizers have determined is a food desert — an urban center plagued with a paucity of fresh, healthy sustenance. In 2017, the United Way of Berks County surveyed 500 nearby households and discovered half of the respondents worried they might run out of food. People in the community health business call that “food insecurity.”

So, the community stepped up in Reading, arming themselves with the stalks of celery and piles of cantaloupe volunteers stack on folding tables in a square of pavement on North 6th Street. Blue Mountain Academy, a Seventh-Day Adventist school in nearby Hamburg, grows the veggies on its certified organic farm. The farm stand buys its fruit at auction.

For about a year, the farm stand operated out of a room inside the hospital, but COVID-19 forced it outside to allow for more social distancing. It will move inside again this winter but, for now, serving up fruit and veggies in the fresh air has boosted its popularity.

On the Tuesday of Kazin’s visit, 50 people gathered at the market during its 11 a.m. to 2 p.m. hours, all wearing masks and standing six feet apart in a line that stretched down the block.

Several of the patrons were people passing by. Others, like Kazin, are regulars.

It sometimes feels like a long walk for Josephine Paz, who lives on 9th Street. Still, she comes every Tuesday. Paz is a patient at the Downtown Campus. She lives with numerous ailments, such as diabetes.

For patients like Paz, for whom fresh produce is an elusive must, St. Joseph created Veggie Rx. The hospital gives recipients vouchers that can be spent on fruits and vegetables at various vendor locations.

Other organizations also chip in with freebies. Kazin gets a discount through the Pennsylvania Department of Human Services’ Supplemental Nutrition Assistance Program Education. The Food Trust has partnered with other community organizations to expand the reach of its Berks Farm Bucks program during the pandemic. Through the Berks Farm Bucks program, patrons get $4 of vouchers to spend just for shopping at the farm stand. These vouchers can be redeemed any day at the farm stand, as well as several other participating vendor locations.

Magali Martinez lives four blocks away and never misses a farm stand. On this Tuesday, she’s filled bags with melons, grapefruits, mangos and plantains. “It’s fresher here,” she said in Spanish. Also it’s a chance to see her son, Angel Nieves, who works as a security guard at the Downtown Campus.

A family atmosphere orbits the gathering. Everyone seems to know everyone else. Alex Roche, who works for The Food Trust, saw his parents in line, rounded the table and leaned in to give them a hug. Then he remembered. Social distancing. Pandemic.

Diana Rodriquez helped customers, offering to translate between Spanish and English speakers. Rodriguez is a community health worker for the College of Medicine and an agent of REACH, a Centers for Disease Control and Prevention-funded program administered by the College geared to help Hispanics and Latinos navigate health care.

“The essence of being a community health worker is being in the community,” said Laura Welliver, grants and special projects officer at St. Joseph. “And that’s what she does.”

About 80% of the people surrounding the farm stand are Latino. REACH is Penn State Health and the College of Medicine’s conduit into that community – it produces literature, conducts outreach events and gives local Latinos a point of contact.

Much of their work is completed through partnerships with other community organizations. “REACH adds capacity and impact,” Welliver said. “What we do dovetails into the farm stand.”

During the pandemic, their work has become even more crucial – helping Spanish-speaking people understand the seriousness of the illness. Rodriguez’s counterpart in Lancaster and Lebanon counties, Madeline Bermudez, helped her son when he contracted the disease. Rodriguez contracted COVID-19 herself and spent several days in intensive care before she recovered.

On this day, she’s back at work at the farm stand, helping her friends and neighbors shop for food.

Kazin jaws with a few of the volunteers before heading home. He could live just about anywhere, but places like the farm stand make Reading hard to beat.

“I love the changing seasons,” he said. “If you want the country, it’s nearby. If I want to go to a big city, there’s New York and Philly.”

December is a time to celebrate holidays, diversity