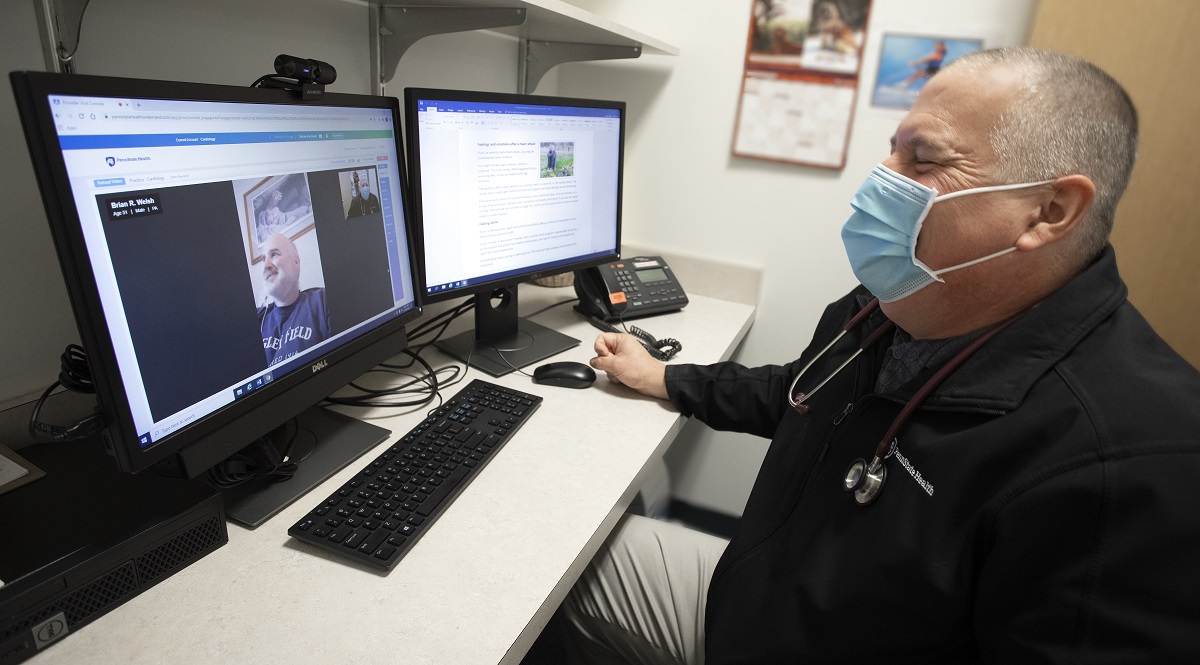 For the first 35 years of his life, Brian Welsh exercised solely for fun. He played football in his freshman year of college, and later threw discus and shot put for Millersville University. “I never felt like going to the gym was work,” Welsh says.

But after taking a full-time job that left him mentally and physically tired, Welsh stopped exercising. And it affected his heart, to the point that Welsh, now 51, needed triple bypass heart surgery last August. He knew he had to get back to exercising. So he followed his doctor’s orders and participated in the Cardiac Rehabilitation Program at Penn State Health Milton S. Hershey Medical Center.

In his final two weeks of the 36-session program last December, Welsh took advantage of a new hybrid approach to cardiac rehab. That allowed him to have one session in person at the Milton S. Hershey Medical Center and a second session from his Harrisburg home using the Penn State Health OnDemand app.

“When they told me about the hybrid approach, I said it sounded awesome,” Welsh says. “They taught me the type of exercises I could do at home with the equipment I had so I could keep exercising after cardiac rehab ended.”

The brainchild of cardiac rehab nurse manager Andrew Sorey and exercise physiologist Mike Zehner, the hybrid approach allows people who suffered a heart attack, heart failure or other cardiac procedure to complete cardiac rehab while reducing travel time and enhancing safety during the COVID-19 pandemic. Participants may use a hybrid approach for their entire program or for just the final few weeks. It’s the first hybrid cardiac rehab program in the area.

“Hybrid cardiac rehab helps transition people to a home-based program so they can continue exercising for the rest of their life and achieve the ultimate goal of cardiac rehab, which is to reduce the risk of a second heart event,” Zehner says.

Benefits of cardiac rehab beyond exercise

According to the American Heart Association, fewer than 20% of eligible patients complete a cardiac rehab program despite its proven benefits of reducing heart disease risks.

Welsh didn’t have to be convinced to start the program. He started recovering from his heart attack on his own last August. “It was hot outside, so I got a treadmill, but then I found that I was getting bored with the treadmill and was watching TV instead,” he says. “I needed an exercise program that was more structured.”

Cardiac rehab gave him that and more. He also learned about proper nutrition and other heart-healthy habits. “Mike and Andrew opened my mind to new things that I hadn’t thought about for years,” he says. They also made each session enjoyable. “We’d talk about football—the Philadelphia Eagles, Penn State—and that made it fun,” Welsh says.

“Talking to patients about things other than heart disease allows them to become more comfortable with us,” Zehner says. “The more comfortable they feel, the more they’ll come to you with any problems they’re experiencing during cardiac rehab, and the better we can help them.”

Now, 10 weeks after his cardiac rehab program ended, Welsh continues to exercise three times a week. His workouts include a combination of free weights, fitness bands, a treadmill and an exercise bike. “My wife even bought an exercise video we’re going to try,” he says.

Best of all, he’s feeling stronger, has more energy, takes fewer breaks between exercises and is ready to make lasting change. “I’m going to do this for as long as I can—the rest of my life,” he says. “I feel so much better now that my heart and my body are in good shape.”