Hope on the horizon: student-led vigil and memorial starts journey of healing 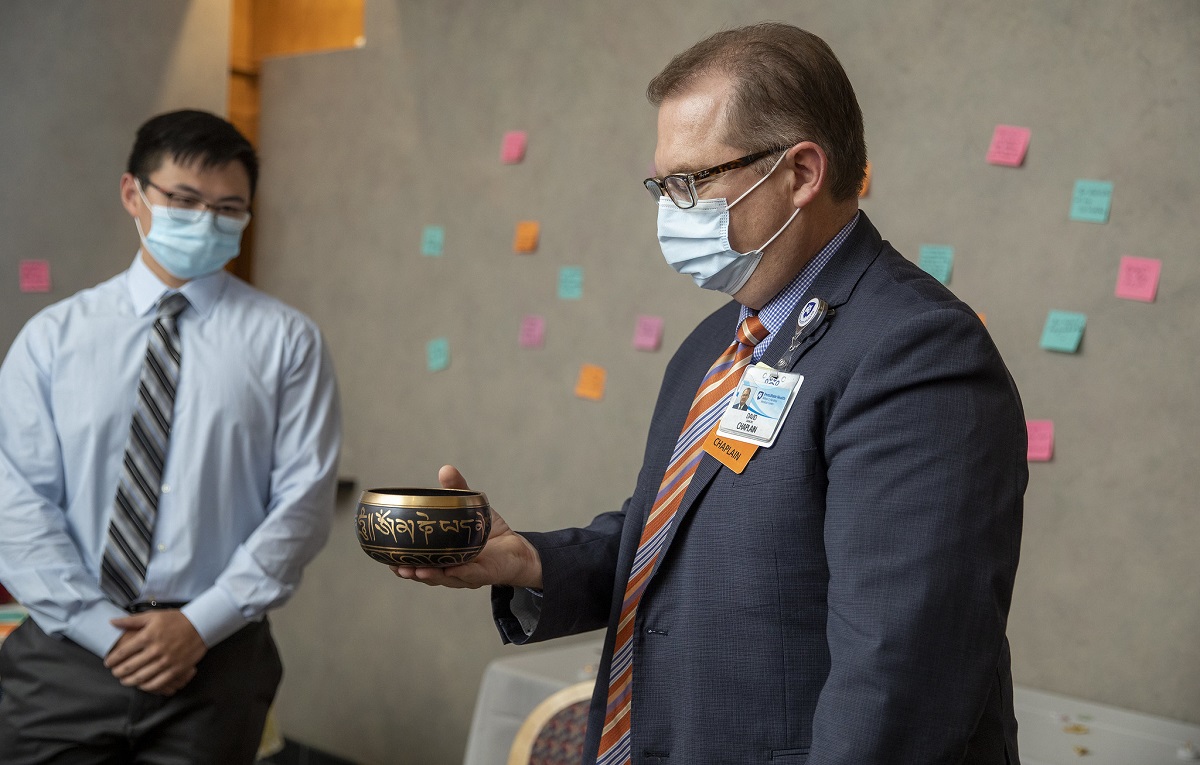 David Simmons, director of pastoral care, rings the Tibetan singing bowl during a moment of silence during the COVID-19 Memorial.

They came to the chapel at Penn State Health Milton S. Hershey Medical Center to remember a year of COVID-19. For some, the year’s ache lingered, but many had turned a corner and during the 12 months discovered a new resolve.

Tea lights twinkled in the dim space while a small group gathered in reverence to read aloud words of agony, peace, comfort and hope. The sounds of a Tibetan singing bowl echoed in the small chamber as those gathered acknowledged the losses of the past year.

It was the eve of the one-year anniversary from when the Medical Center admitted its first COVID-positive patient on March 20, 2020. First-year medical student Makayla Lagerman began the COVID vigil she and her classmates had planned by stepping up to the podium and looking into a web camera. On the other end of the Zoom call, were health care workers, faculty members and students who came to process the year’s trauma and emotions.

On the walls behind Lagerman, staff and students had arrayed colorful post-it notes throughout the week. They’d written memories and reflections on each note. Some acknowledged sadness – including the long, heartbreaking video calls with family members of COVID-positive patients. But many of the notes were encouraging – saluting someone who carried them through the past year or celebrating the patients who were able to walk out of the hospital.

One note stood out among the rest: “The processing of all this is just beginning.”

A reason to reflect

Lagerman and fellow first-year medical students Gianna Dafflisio and Jason Ha each remembered when COVID-19 began to change their lives. For Lagerman, who was working at a medical clinic for men experiencing homelessness in Washington, D.C., when the pandemic began, it became real when her coworkers were fitted for N95 masks. Then the clinic cut back her hours. Dafflisio was spending a gap year in Manhattan working on a clinical trial before she eventually lost her position.

“I was in my final year of college and we were told to go home,” said Ha, who got a test before returning home to parents and grandparents because he had some symptoms of COVID-19. “Although my test came back negative, the gravity of the pandemic hit me when I realized I wouldn’t be able to graduate with my friends and that I would have to isolate to protect my family while living with them.”

Lagerman worried it might seem strange for three students who weren’t yet members of the Penn State College of Medicine community to lead the vigil commemorating the one-year anniversary of COVID-19’s arrival, but it gave them a chance to help a community they believed had given so much.

“The front line workers – nurses, doctors, lab workers, respiratory therapists, food services, environmental health workers and so many others – many of them haven’t had time to start processing what they’re feeling,” Lagerman said. “This vigil gave people the space to start unpacking the emotions of the past year.”

From hurting to healing

Lagerman, Dafflisio and Ha are members of the College of Medicine’s Palliative Care Interest Group, which allows students to explore a subspecialty of medical care aimed at optimizing the quality of life and reducing suffering among people with complicated, serious illnesses. Their involvement prompted them to lead the event and gave them a chance to ease pains and offer hope to those who need it.

“Seeing the pain and heartache people experienced when seeing the condition their loved ones were in while hospitalized with COVID was difficult,” Lagerman said. “As we got closer and closer to March, we started having moments where we said, ‘What was I doing this time last year? How was I feeling?’ and those two things are what inspired us to plan the vigil.”

Though the service began with reflections on the pain experienced the past year, the tone turned optimistic as the students remembered the extraordinary efforts of the front-line and essential workers. Faculty, staff and students had the opportunity to write letters of gratitude and thanks for their co-workers, which were later delivered. Dafflisio said that the vigil was just the beginning of a journey of healing.

“We hope that this creates an opportunity for all of us to reflect upon our grief and rejoice in our hope,” Dafflisio said. “We want the community to still feel a sense of personal connection through our shared emotions, even in a time when we can’t be physically together.”

Faculty, staff and students can watch a replay of the vigil here.

The Medical Minute: Mammograms and the COVID-19 vaccine