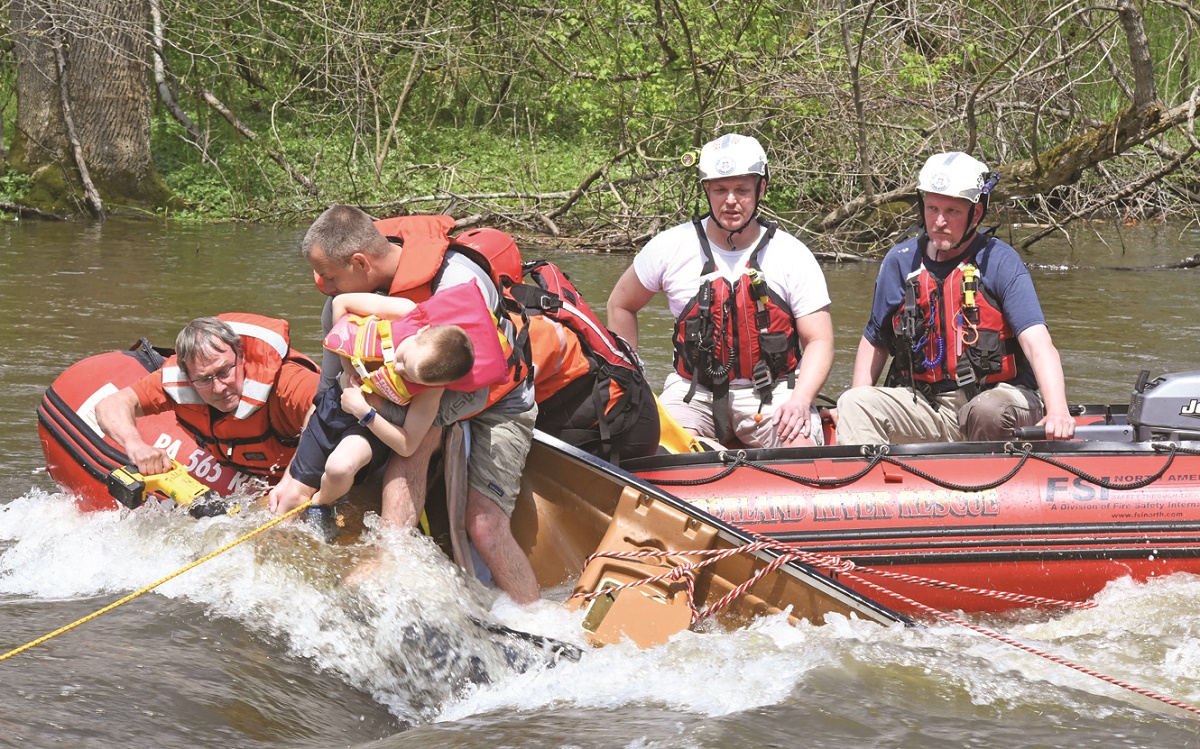 A family who ventured into the swollen waters of the Yellow Breeches Creek a year ago quickly found themselves in trouble until Penn State Health Life Lion Emergency Medical Services (EMS) paramedic Rex Carmichael showed up.

Carmichael, who was off duty but always tuned into emergency services dispatches, abandoned the groceries he was helping his wife unload at their Monroe Township home and made the short trip to the scene near Williams Grove Speedway.

“The call was for a water incident, so I grabbed my swift water gear from the garage and headed down,” said Carmichael, who has worked for Life Lion EMS for almost 25 years.

Upon arrival, Carmichael grabbed a life jacket and added himself to the crew of the initial rescue boat, which would turn out to be the only boat that could make its way through the fast-flowing waters to the overturned kayak about 50 yards from shore.

The force of the water had bent the kayak in half around a tree, and a frantic father was holding his son’s head above water. The child’s foot was caught under the tree.

What Carmichael did next earned him the Meritorious Service Award, reserved for a certified EMS provider who goes above and beyond the call of duty. The award is given by the Emergency Health Services Federation, which is the regional EMS Council of the Pennsylvania Department of Health’s Bureau of EMS. He received the award on May 27 during a leadership meeting at Penn State Health Holy Spirit Medical Center. 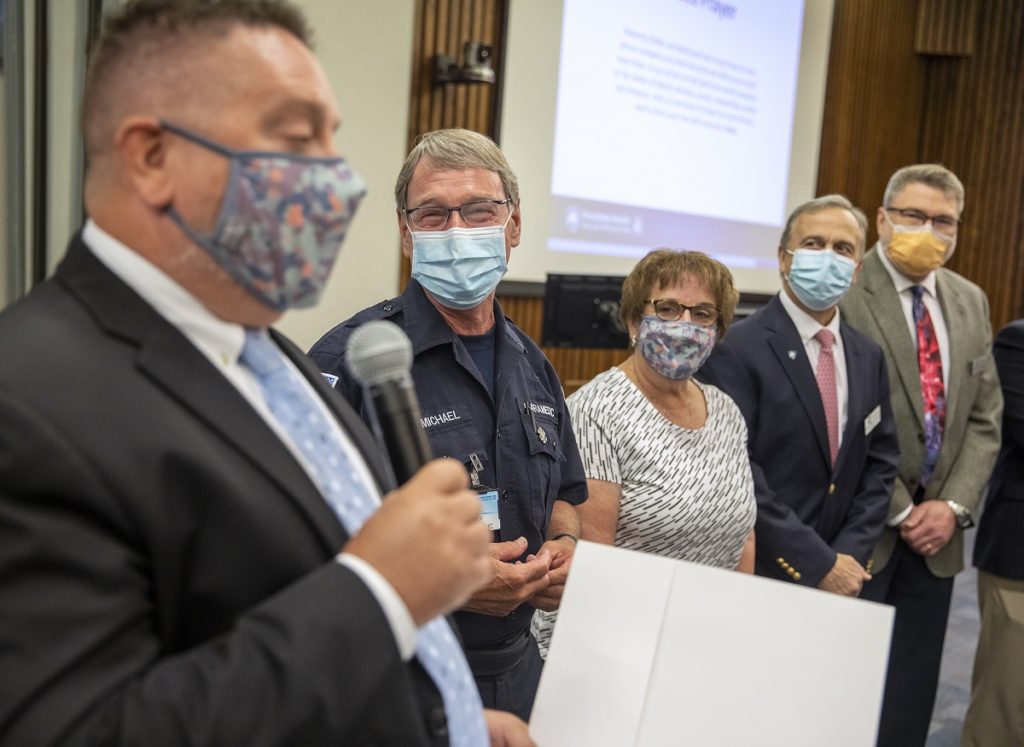 No mask can cover the smile that spreads over paramedic Rex Carmichael’s face, second from left, as Steve Lyle, left, executive director of the Emergency Health Services Federation, presents him with the Meritorious Service Award.

Recalling the rescue, Carmichael said at first, he tried pulling on the child’s leg to loosen him, but that didn’t work. Using a reciprocating saw, or Sawzall, he began to cut pieces off the kayak and saw through tree roots to free the boy’s foot. The icy water swirling around him was a constant foe.

Carmichael’s heart sank as a rescue boat of firefighters got caught in the roots of a tree, sending the firefighters floating down the creek. Carmichael looked toward shore in amazement at all the first responders at the ready, with ropes and litters, but no one could get to him.

An hour and a new saw blade and battery later, the boy – who was hypothermic and had a broken leg – was freed, but the drama wasn’t over yet. An incoming rescue boat got caught in the current and began to capsize.

“Just before they went under, they threw the boy as hard as they could back into our boat,” Carmichael said. “It was absolutely the right thing to do, but his head smacked me right in the face, and I was seeing stars.” The impact broke Carmichael’s glasses and gave him a black eye.

When they finally reached shore, the boy was flown by Life Lion to Penn State Health Milton S. Hershey Medical Center, where he recovered.

Carmichael never heard from the family, but he doesn’t need their thanks, he said.

“It was a once-in-a-lifetime opportunity – to get out there in swift water and figure out what to do, and do it for that long,” he said. “It took a village, if you saw what I saw – all the people up on shore, just waiting to help.”

But in reality, it was Carmichael who saved the day.

“I am sure that Rex is going to say he did nothing out of the ordinary and that it was a team effort,” said his Life Lion supervisor, Kevin Dalpiaz, who nominated him for the Meritorious Service Award. “But emergency personnel who were on the scene have described his interactions as exemplary and heroic, and his actions are believed to have saved this child’s life.”

When Carmichael returned home after the ordeal, his wife, Molly, had no idea where he had been. After assessing the black eye and seeing he was fine, her first question: “So, are the frozen foods still in the back of the truck?”

Carmichael, who sported the nasty black eye for weeks as a testament to his heroics, said he won’t hesitate to respond again, even when he’s not on duty.

“I grew up in an era where we were all volunteers, and I was used to running from home, so when I can, I do,” he said. “It’s just what you do.”

Help us share the good news going on at Penn State Health, including small happenings that might otherwise go unnoticed. Have a “Pawsitivity” story to share with us? Email us and write “Pawsitivity” in the subject line.