Beckie’s story: Finding answers for herself, other women 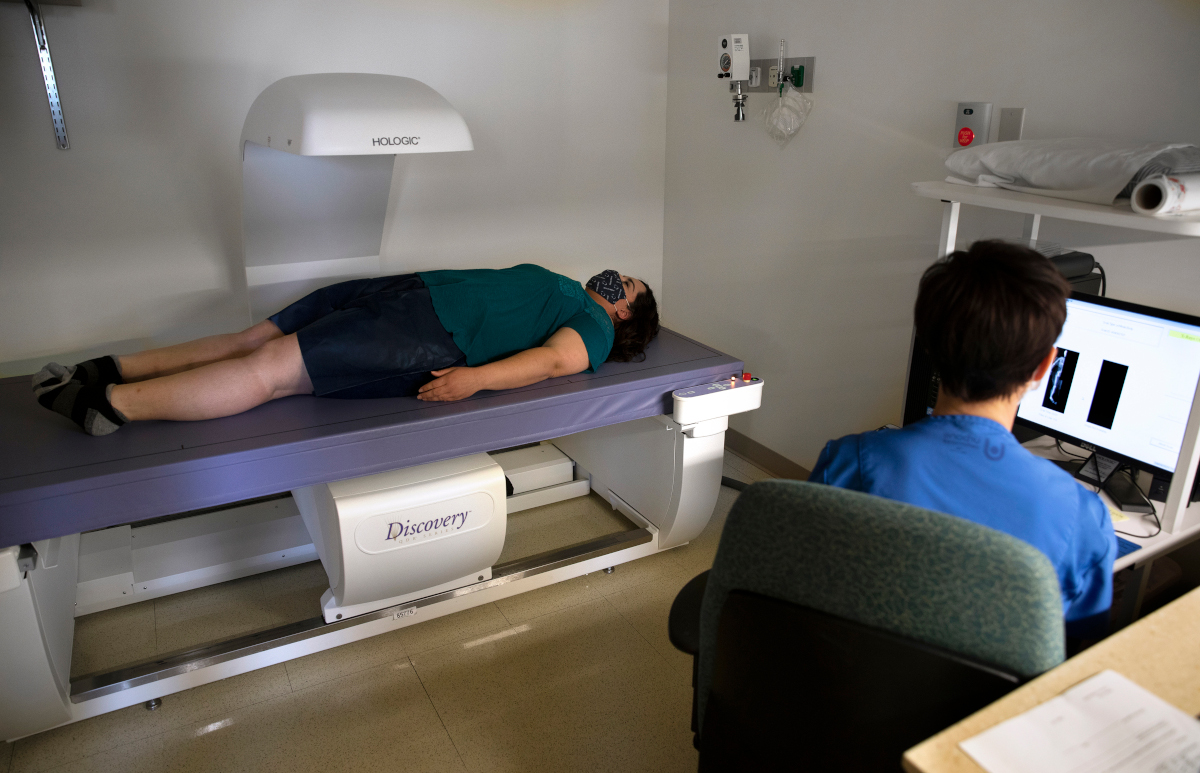 Becky Bomberger, who is diagnosed with polycystic ovary syndrome, participates in her third clinical trial at the Penn State College of Medicine Clinical Research Center on Friday, April 9, 2021.

Sure, some months, she’d miss her period, but she figured that was because her job and the college courses she was taking in high school were stressful and she worked hard in rowing and cheerleading. After all, she was always active and ate right.

She didn’t believe the diagnosis: polycystic ovary syndrome (PCOS), a hormonal disorder that affects one in ten women of childbearing age and causes infrequent or prolonged menstrual cycles and/or excess male hormone levels.

When Bomberger went to college, she began to see a new doctor and started a conventional treatment for PCOS, which left her feeling nauseous and fatigued.

Then one night when she had pain like she never felt before. After a trip to the emergency room and a consultation with her original doctor, Bomberger could no longer deny her condition – the ultrasound showed that her ovaries were covered in cysts.

But she moved on from denial a long time ago. Today, Bomberger is helping others overcome the illness. Its effects are wide-ranging – 5% to 7% of all women of reproductive age in the U.S. suffer from the disease – but treatment options, she discovered, are few.

Bomberger wants to change that. As a participant in clinical trials, she’s helping doctors and researchers test the effectiveness of new treatments for PCOS.

Few treatments exist for PCOS, so Bomberger sought the care of an expert: Dr. Richard Legro, chair of the Department of Obstetrics and Gynecology at Penn State College of Medicine and Penn State Health Milton S. Hershey Medical Center, home of more than 700 clinical trials in central Pennsylvania. She chose Legro for his nationally recognized expertise in PCOS care and research. He leads and participates in several clinical trials seeking new treatments for the disease. 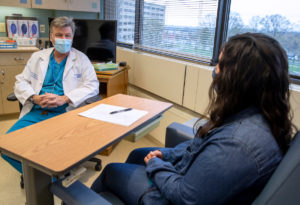 After a few visits with Legro, Bomberger received an email about participating in PCOS research studies.  Because she felt that traditional treatments — which can include lifestyle changes or prescribed medications to regulate menstrual cycles or hormone levels — weren’t the best for her, Bomberger was excited at the possibility of helping researchers explore whether new treatments could help others.

On a normal day, Bomberger wakes up at 3 a.m. to help take care of the animals on the farm that she lives on before heading off to work at an animal research laboratory — the same one she worked in as an undergraduate student —at Penn State College of Agricultural Science. She and her colleagues are learning more about how diet affects the milk dairy cows produce.

Bomberger knows firsthand how changes in diet can affect physical health. Because she has PCOS, her body sometimes has difficulty processing certain foods. Doctors suspect that women with PCOS have a hard time producing insulin, which helps regulate blood sugar levels. In addition to watching what she eats, she also occasionally experiences dizziness, fatigue and brain fog.

“PCOS is linked to heart disease and diabetes,” Bomberger said. “I’ve had family members who’ve lost limbs to diabetes, so it was important to me that I find appropriate care so I could live with this disease and not let it define my future.”

To make it to her clinical research appointment on time, Bomberger still wakes up at 3 a.m. to take care of her animals, but instead of heading off to work, she begins the two-hour commute to Hershey.

Making a difference for other women

One of the first faces to greet Bomberger on her arrival belongs to research project manager Amyee McMonagle. Even through face masks, the two women smile ear to ear when they see one another.

“Beckie shares the same passion that we do in helping find other treatments and a cure for PCOS,” McMonagle said. “She’s reliable, accountable, respectful and invested in her participation. Between the study team and Beckie, we’ve been able to foster this atmosphere of trust, and I think that’s important.” 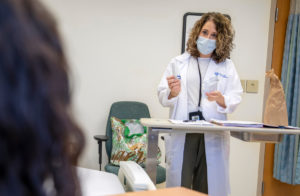 The current study Bomberger is involved in is the Inositol Supplementation to Treat PCOS (INSUPP-PCOS) Trial. Penn State College of Medicine, a hub for medical research and innovation in the region, is the only site in the nation to offer the trial. Legro is evaluating whether a nutrient called inositol — commonly found in foods like fruits, beans, grains and nuts — can improve the way bodies of patients with PCOS use insulin and promote hormone balance.

Bomberger is randomly assigned to one of four groups as a study participant – twice daily for three months she will take a pill with either 1 gram of inositol, 2 grams of inositol, 3 grams of inositol or a placebo, which does not contain any inositol. The study is double-blind, which means neither Bomberger nor the research team will know to which group she is assigned.

Although it might be a while before researchers know the results of the studies she participates in, Bomberger is happy knowing that her involvement will make a difference and could lead to improved care for women with PCOS in the future.

“Research is a big part of who I am,” Bomberger said. “As a graduate of Penn State, I’m proud to be involved in the University’s research mission both in my daily life as a research assistant but also as a clinical trial participant.”

Learn more about the INSUPP-PCOS Trial

This research is made possible by the National Center for Advancing Translational Science through Penn State Clinical and Translational Science Institute through use of the Clinical Research Center at Penn State College of Medicine (grant number UL1 TR002014). This research is also supported by the National Center for Complementary and Integrative Health of the National Institutes of Health (award number R01AT009484). The content is solely the responsibility of the authors and does not necessarily represent the official views of the National Institutes of Health. The research team declares no conflicts of interest.