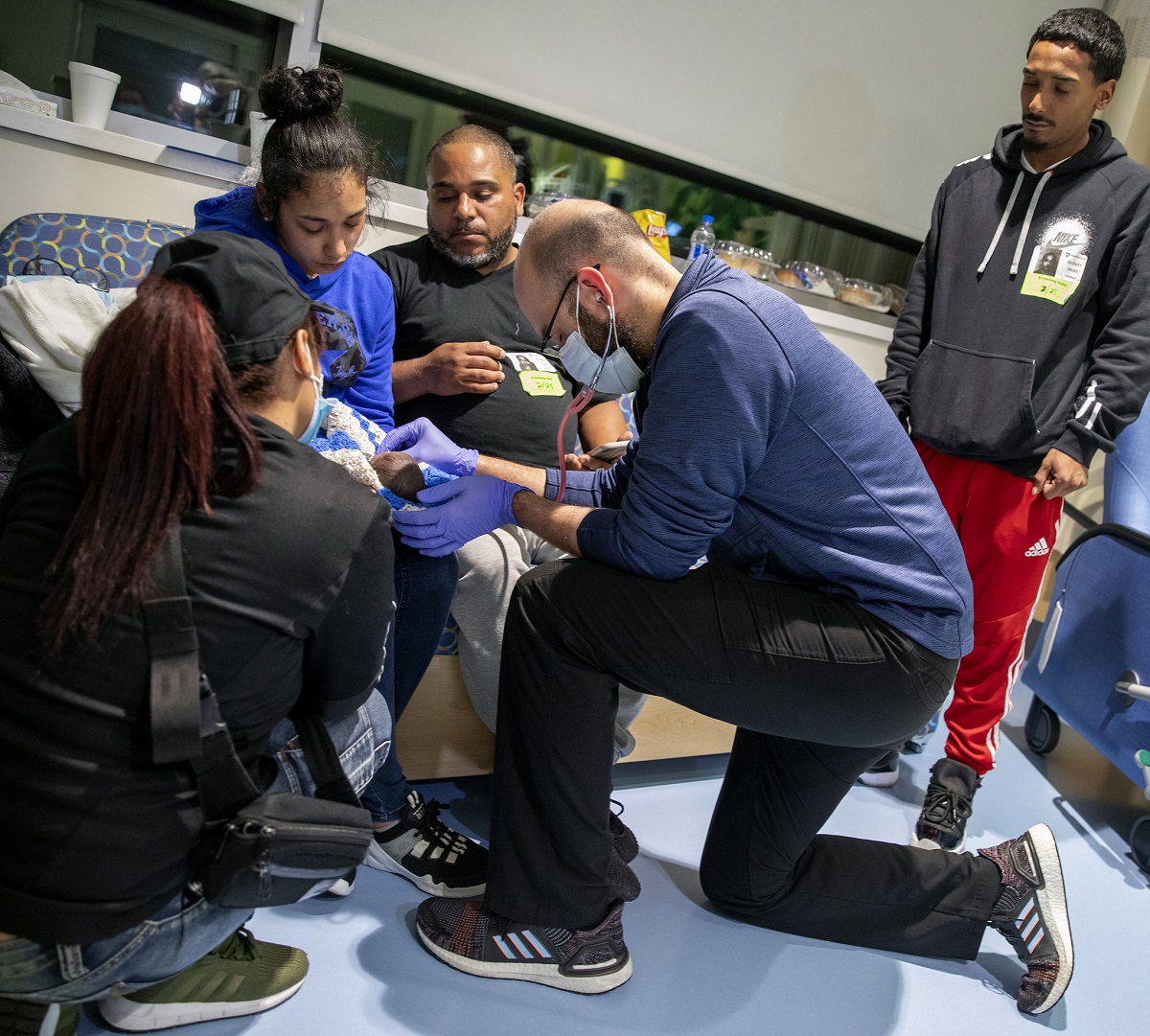 The family of Ethan Colon-Garcia gathers around Dr. Brandon Worth, right, as he listens for the one-month-old’s heartbeat in the final minutes of his life.

This story contains content related to infant loss that may be sensitive for some readers and viewers.

Jerileez Colon-Garcia was starting to decorate a spare room in her apartment in downtown Reading this winter for Ethan, the baby boy who arrived like a miracle after doctors told her she’d likely never have children.

She is still making the room over for Ethan, even though now he will never sleep there, and his crying will wake her only in dreams. In his room, Ethan exists as black-and-white photos, a stuffed lamb that holds a recording of his heartbeat and a box of ashes.

And in the empty space inside Jerileez.

Many of the objects that form the architecture of her grieving―photos, plaster casts of tiny hands and feet and colored beads―come from the hospital where Ethan lived out his short life and the health care workers who grieve alongside her and her family.

“They loved my son,” Jerileez said.

As they do with children throughout Pennsylvania every day, a team of doctors, nurses and health care workers at the Children’s Hospital fought like hell to keep him alive. When he died on the night of Feb. 25, their efforts shifted to helping the family through the hours and days that followed.

When families in the region look to you to help their most fragile, sick or injured children, you enable and celebrate the happiest moments in many of their lives. The flip side, of course, are the tragedies that may be less frequent, but which run just as deep. That’s when Children’s Hospital staff call upon a different skill set: adeptness at supporting families in their grief – something that is born from their own senses of loss and responsibility.

When a patient is dying, health care workers guide decisions with facts, give space to say goodbye, offer shoulders on which to cry. And they do it while managing their own dualistic sorrow.

Ethan is not theirs.

And at the same time, he is.

“It doesn’t really go away,” said Dr. Brandon Worth, the neonatal-perinatal medicine fellow who helped comfort Ethan as he took his last breath.

Jerileez and her husband, Felix Roman, knew Feb. 25 was going to be Ethan’s last day when they arrived at the hospital at 8 a.m. The fact had settled inexorably upon them over a period of weeks.

Ethan had been born months premature at Hershey Medical Center through an emergency Cesarean section. At first, Jerileez didn’t want the procedure. She’d been praying for a baby for years. When her doctors told her about complications, that Ethan was dying inside of her, she said, “But I feel fine.”

He weighed less than 14 ounces at birth, but at first Ethan seemed to thrive. He cried like a full-sized baby. Jerileez said he opened his eyes, and she’d seen him smiling.

But his condition worsened. His immune system proved no match for bacterial infections, and he suffered from chronic pulmonary hypertension. “He got really sick, then he’d get better, then he’d get sick again,” Dr. Worth said. “It was a real roller coaster for him.”

Then came Feb. 25. When they arrived that morning, Worth pulled them into a room with his attending physician, who explained Ethan would not improve.

Jerileez wasn’t ready. They asked for an additional private room. One by one, her family members arrived and wept and prayed with her. Hours later, she accepted what had to be done.

Then hospital staff got to work on what was to come.

When she needs to, Jerileez goes to Ethan’s room and holds a moment in her hand.

The moments are symbolized by beads. Each one is a different color, and each color represents a different moment in Ethan’s month on this planet. Jerileez can cup each bead in her palm, close her eyes and remember.

Baths. The time he cried. The day she held him.

One day, despite all the wires, tubes and equipment attached to him, she held Ethan for about an hour. She imagined what he would look like as he grew.

“I’m going to spoil the heck out of him,” she thought.

The Children’s Hospital gave her the bag of beads, one of many mementos she has compiled that no one wants to collect, but which are worth more than money.

The hospital provides “all those little things the parents cherish,” said Janelle Porath, a neonatal nurse practitioner and a photographer for Now I lay Me Down to Sleep.

The night Ethan died, a dispatcher from Now I Lay Me Down To Sleep called Porath at home. The Colorado-based nonprofit helps families capture professional images of children when they are dying or have died. She grabbed the camera bag she always keeps ready and drove to the hospital.

Porath feels a kinship to families who lose infant children. Her own brother died at the age of 2, before she was born. For the rest of her life, her mother kept a small black-and-white photo of him next to her bed. “If we had a fire, she wouldn’t leave the house without that photo,” Porath said. “I know firsthand how important it is for the parents to have something.”

In 2014, Porath became an affiliate photographer with Now I Lay Me Down To Sleep. As often as three times a week at hospitals around the state, she helps families capture moments before they slip away forever.

“It fulfills me like nothing else,” she said. “It’s also the most heart-wrenching thing I do.”

She arrived around 9 p.m. at Hershey Medical Center. She stayed with the family until after midnight, long after the machines and wires were gone and Dr. Worth no longer heard Ethan’s heart. During that time, a chaplain baptized him, and Jerileez and Felix bathed him.

Porath captured images of the son they’d never watch grow in the final moments the three would spend as a family. They are framed and hanging on the walls of Ethan’s room, photos of a little boy with eyes closed. Jerileez sometimes looks at him as she sits in his room and remembers.

Sometimes, Jerileez cradles a stuffed lamb. When she squeezes it, she hears the rhythm of his heart. Soon after the family decided to remove him from life support because he was not going to survive, health care workers held a recording device to his chest to capture the sound.

Her fingers can find his little hands and feet. Health care workers made plaster casts. They rest on a pedestal on a makeshift altar she has built with his death certificate, candles and resin statues of angels.

Small details have become giant symbols. The family made T-shirts with the Captain America circle and stars on them – the random decoration in his room ─ and wore them to the funeral. They released dozens of balloons – red, white and blue, of course.

Everyone has given her so many objects to help her remember. Photos, cards, construction paper flowers made of his footprints.

But perhaps most valuable of all, the Children’s Hospital gave them peace. Felix and Jerileez didn’t start their drive home until 3 a.m., and even then, no one told them they had to go.

“The idea is to leave a sense of peace that lingers in the room,” said Ashley Fricchione, a NICU nurse manager, “long after the baby is gone.”

To be sure, bringing that sense of peace takes a toll. The demands of Dr. Worth’s profession requires him and his colleagues to remain outwardly stoical, while inside they are heartbroken.

There’s little training for giving comfort to a family faced with the death of a child, Worth said. What he knows, he has learned on the job.

“I’m able to partially compartmentalize,” he said. “But it’s not really something you get used to. …Doctors are often seen as being the strong one in the room. But it takes solidarity.”

Counselors are available. Colleagues rally together. And then you move on to the next patient, though the pain lingers “for a long time,” he said, “if not forever.”

Worth says he tries to grow from it. Telling Jerileez the awful truth on Feb. 25 and listening through a stethoscope to Ethan’s fading heartbeat has changed him in ways he has yet to discover.

Meanwhile, Jerileez still sees Ethan in dreams. He’s bigger and has a full head of hair. Then she wakes up and finding his room empty, touches the things she has left.

Maybe she and Felix will try again, she says.

“One day,” she says, “we’ll try for another.”
Point at the image below to reveal slideshow player controls. 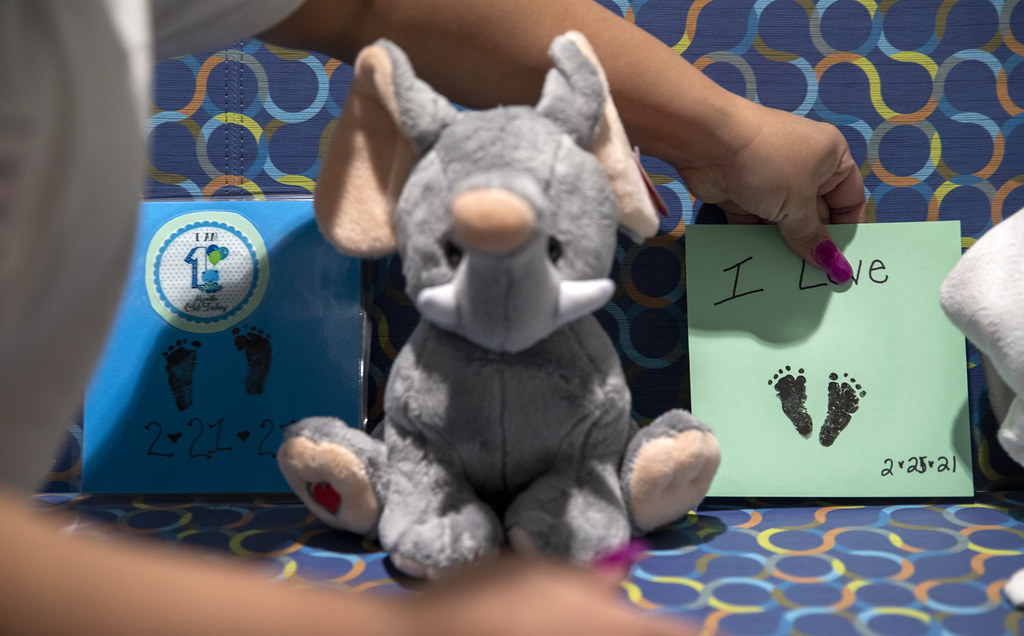