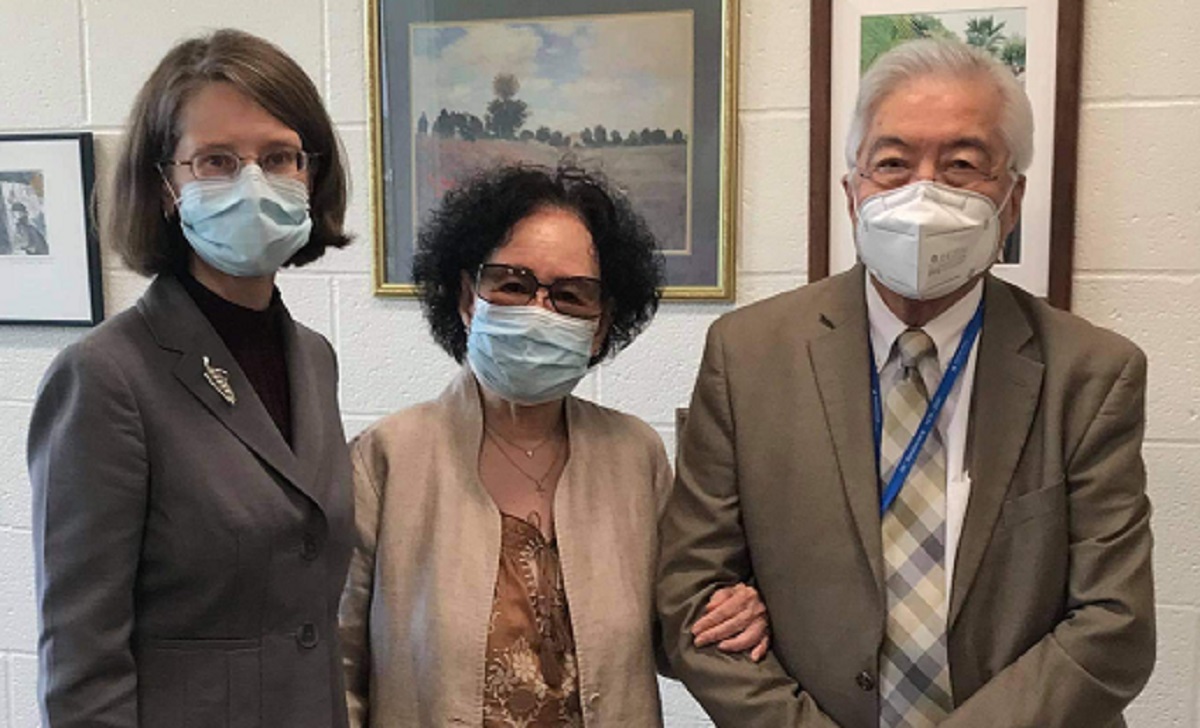 Dr. Erika Saunders stands next to Esther Tan and her husband, Dr. Tjiauw-Ling Tan, during an event celebrating Dr. Tan’s 50 years as a psychiatrist with the College of Medicine.

The Department of Psychiatry and Behavioral Health recently honored Tan and announced a clinical faculty award will be named for him, the Ling Tan Outstanding Contributions to Clinical Service Award.

“It’s an extraordinary place to work,” he said.

Tan arrived in Hershey after spending a few years at the University of California, Los Angeles.

Before then he grew up in Indonesia where he became interested in psychiatry in high school. One day, he read a Reader’s Digest article about psychosomatic medicine, and he knew psychiatry was his calling. He attended medical school at the prestigious University of Indonesia, but his dreams of a medical career in Indonesia were dashed because of political upheavals. After graduating, “There was widespread persecution, and I had to leave my beloved country,” Tan said.

Now, he has spent more time living in Hershey than he did in Indonesia and is happy his path led him here. During his time at the College of Medicine and Penn State Health Milton S. Hershey Medical Center, he has served in many clinical leadership roles, including director of the Adult Inpatient Psychiatry Unit, director of the Emergency Psychiatry Service and director of the Behavioral Medicine Clinic. He also works with patients in the Penn State Health Eating Disorder Clinic and the Milton S. Hershey Medical Center psychiatry partial hospitalization program.

A philosophy of giving

Dr. Erika Saunders, Gerald B. Shively and Robert Y. Tan Professor of Biological Psychiatry and chair of the Department of Psychiatry and Behavioral Health, said Tan is revered for his clinical wisdom and holistic approach.

“Patients adore him,” she said. “He cares about patients as people. He really connects with what patients need at the human level. That is what makes him such a great doctor.”

Tan said his philosophy in life is to focus on giving. That idea goes beyond just caring for patients. He and his wife, Esther – who have their own milestone of 60 years of marriage this year ─ have endowed two professorships at the College of Medicine. He explained that after leaving Indonesia, his College of Medicine colleagues became his family and have helped him through adversities and tragedies he has faced over the many years. He wanted to give back.

The ability to work with patients and help their transformation to healthier lives is what has also kept him at the College of Medicine. He has many good memories of caring for patients. He shared that one evening, he and his wife were dining at a restaurant. The waitress brought over two drinks and said a man at the bar sent them to thank Tan for saving his life.

As for his plans, Tan says he is happy continuing to teach, mentor and care for patients. During the celebration of his five decades with the department, he joked with colleagues that they might want to start planning for his 60th anniversary.