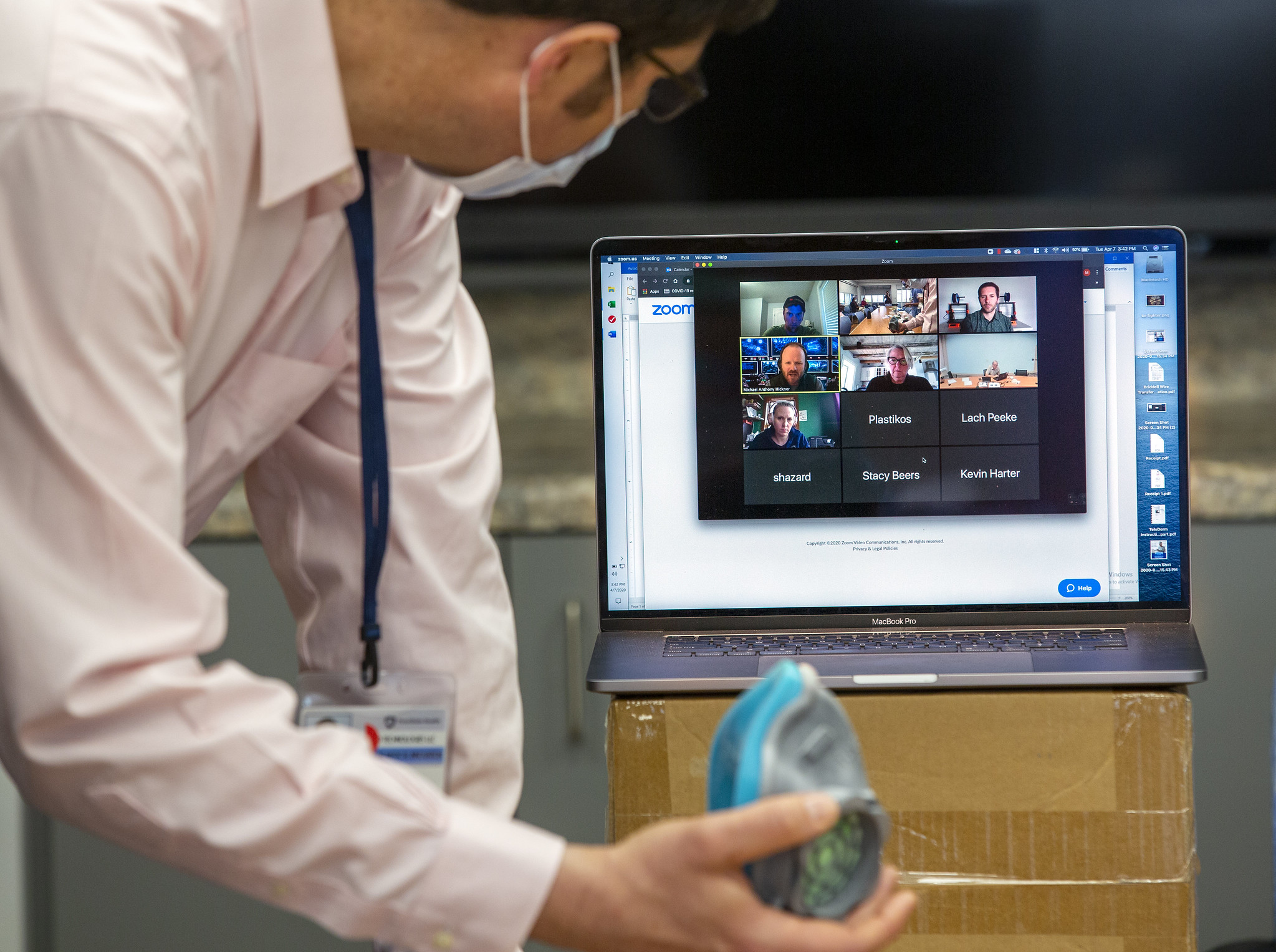 Matt Briddell, a consultant with the Penn State Center for Medical Innovation and the Surgical Innovation Group, talks with people who have zoomed into an April 2020 meeting about 3D printed N95 respirators at Penn State Health Milton S. Hershey Medical Center.

Longtime Penn State philanthropists have established two endowments at Penn State College of Medicine as part of their new $26 million commitment to the University. Peter and Ann Tombros’s gift will establish a fund for the Penn State Center for Medical Innovation (CMI) and create an early career professorship in orthopedics.

The newly established Peter and Ann Cullen Tombros Endowment for the Penn State Center for Medical Innovation will help researchers develop new ideas and push discoveries toward broad utilization. The CMI strives to build a better future by moving groundbreaking innovations down the path of commercialization to make a tangible impact for people in Pennsylvania and around the world. 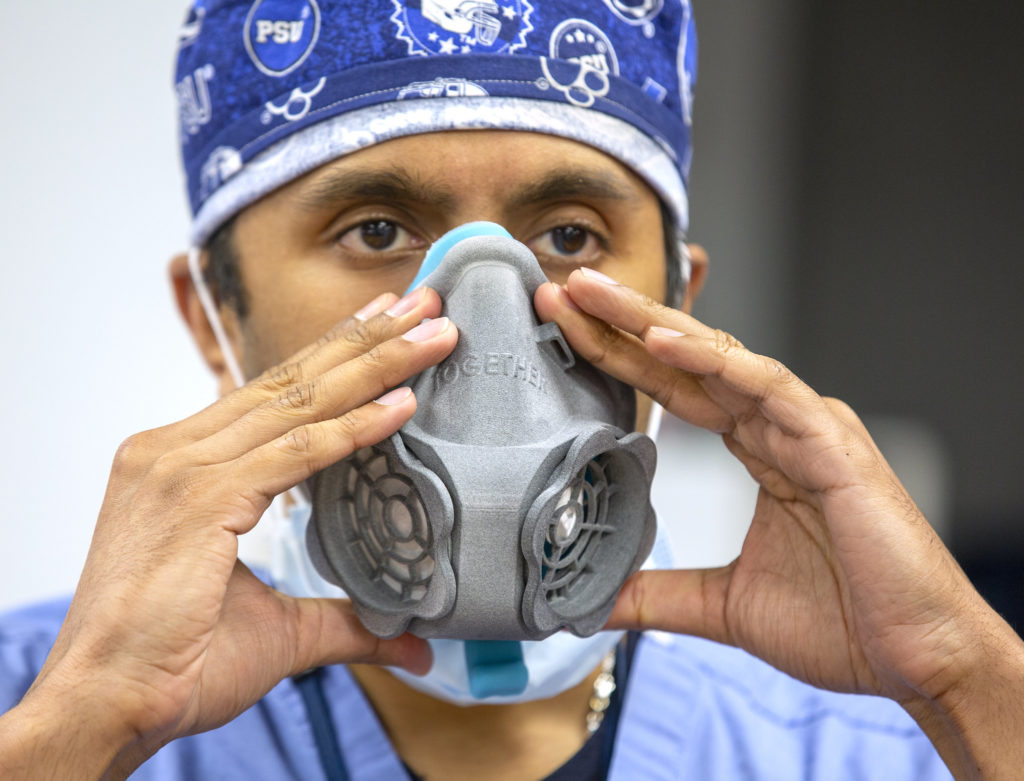 “The mission of CMI is to drive economic and social value from Penn State-generated medical innovations,” said Associate Dean for Medical Innovation and CMI Director Kevin Harter. “Peter has helped us mold the center, and his input has made it better. This gift will help drive translation of technologies that solve unmet medical needs, train students and faculty in the innovation process and establish the University as an even greater driver of economic development.”

Additionally, the Cullen/Tombros Early Career Professorship will benefit promising orthopedists in State College and Hershey. Early career professorships provide the seed money for early research, which may have a tremendous long-term payoff and form the foundation of a successful academic career. Such awards also provide flexible funding for curriculum development, empowering recipients to be better teachers and leaders within their departments.

“The Cullen/Tombros Early Career Professorship will offer support and encouragement for generations of orthopedists during the critical first years of their career,” said Dr. April Armstrong, C. McCollister Evarts, MD, Chair in Orthopaedics. “Endowed positions like this have exponential impact as they affirm the capability and promise of the faculty holder while enabling them to pursue novel research that will improve lives and engage students in the process.”

In addition to these newest endowments, the Tombroses have consistently contributed for 15 years to Children’s Miracle Network and Four Diamonds, both directly and through contributions to the Penn State Dance Marathon (THON™). The couple has also enhanced opportunity for medical students with gifts to the Medical Student Summer Intern Program and by establishing the Dr. E.W. Cullen and Ann Cullen Tombros Medical Student Scholarship in 2019. This scholarship, named in honor of Ann and her father, a longtime physician and surgeon in State College, Pa., provides support for students enrolled in the Penn State College of Medicine University Park Curriculum in State College.

Peter has also given generously of his time and expertise, serving as Penn State Health’s campaign chair for “A Greater Penn State for 21st Century Excellence” and a member of the Penn State Health Milton S. Hershey Medical Center Board of Directors.

“Our family has always recognized the power of science and medical innovation to improve health, and we know the unique ability that Penn Staters have to drive discovery and develop leaders,” said Peter Tombros. “Ann and I are glad to support current and future Penn State College of Medicine faculty and scientists who will channel their creativity and expertise into developing novel medical technologies and treatments and training generations of Penn Staters to lead the way in transforming human health.”

Support from the Tombroses will advance “A Greater Penn State for 21st Century Excellence,” a focused campaign that seeks to elevate Penn State’s position as a leading public university in a world defined by rapid change and global connections. With the support of alumni and friends, “A Greater Penn State” seeks to fulfill the three key imperatives of a 21st-century public university: keeping the doors to higher education open to hardworking students regardless of financial well-being; creating transformative experiences that go beyond the classroom; and impacting the world by serving communities and fueling discovery, innovation and entrepreneurship. To learn more about “A Greater Penn State for 21st Century Excellence,” visit greaterpennstate.psu.edu.