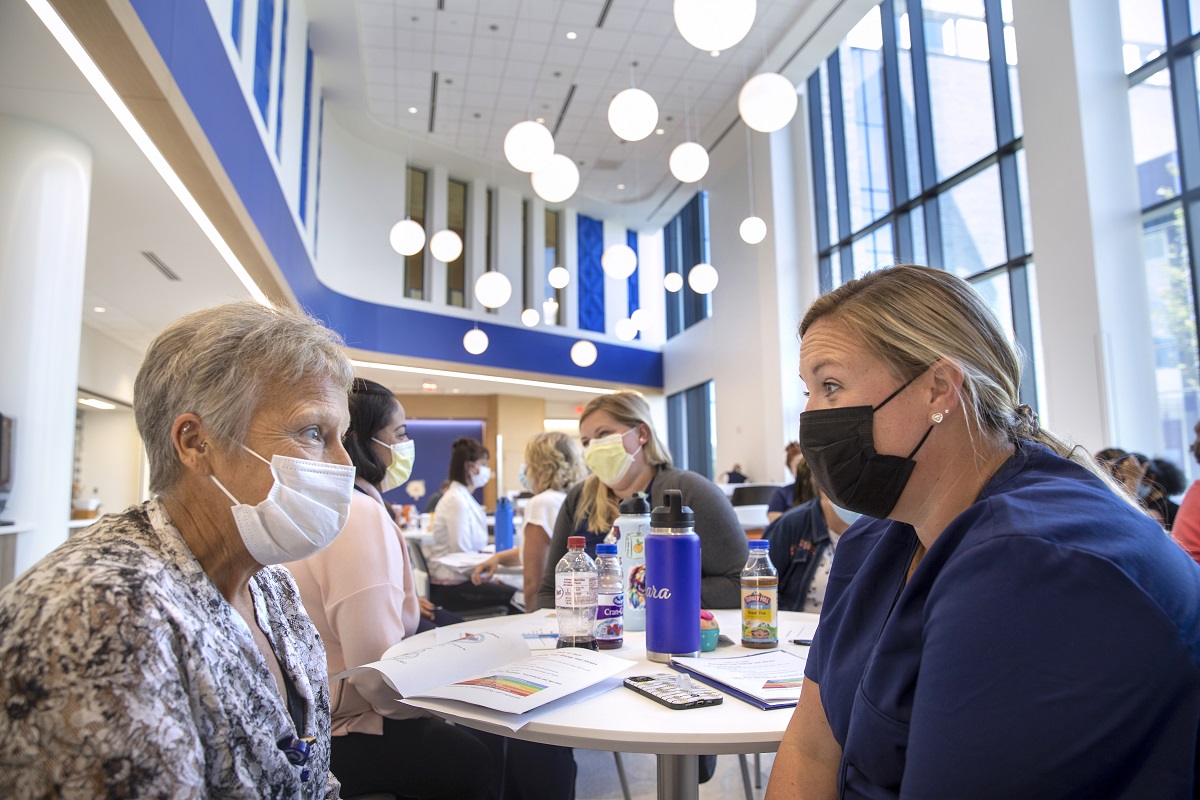 It’s lunchtime on a Wednesday, and even though Penn State Health Lancaster Medical Center won’t start accepting patients until Oct. 3, tables in the cafeteria are full.

Men and women sit in pairs by the yawning windows that bracket the rolling central Pennsylvania countryside. They face one another. “Knee to knee and eye to eye,” instructs Ann Rollman, the nurse educator who is there to teach them.

When Rollman scrapes a mallet over the keys of a toy xylophone, one person from each pair will describe to their partner who they are in a series of “I am” statements. They’ll start with their name and what they do for a living. Then they’ll move on to other descriptors. “I am fun-loving” or “I am a world traveler.”

It’s uncomfortable. Brows furrow as speakers search for the right words. When Rollman again plays her xylophone indicating time is up, a few of the speakers look relieved. But the onus the entire time was actually on the listeners, who must report back to the speaker what they heard.

The exercise is all about active listening, Rollman says, one of the cornerstones of Relationship-Based Care, a system every employee at Lancaster Medical Center will learn, from the emergency room to the board room. Relationship-Based Care focuses on patients and their families, teamwork and health care workers themselves.

The program incorporates principles of relationship-based care with other health care principles and includes sessions such as this one, led by Rollman, a nurse educator with four decades of experience. Since the 341,000-square-foot, 132-bed hospital on State Road in Lancaster opened to staff for training in July, its employees are finding out how Relationship-Based Care works day by day, patient by patient. A Relationship-Base Care council made up of representatives throughout the hospital is helping to coordinate their efforts.

Other hospital systems have completed similar assessments of relationships between employees, themselves and their patients, but often in response to specific challenges – when employee self-care begins its inevitable lag or when increases in volume and the rush of the work pushes patient experience down on the priority scale.

During the seminars, some of the lessons Rollman and her colleagues teach are philosophical. For example, she draws a small circle inside a larger circle on a white board. The small circle represents everything you can control. The outer circle represents all that is outside your control. The circle you focus the most attention on always gets bigger. At the same time, the other circle becomes smaller. In other words, the more you focus on what you can do, the less problems outside that realm will matter.

In the hectic world of a hospital, keeping the focus on priorities can be a challenge. “It’s also really rewarding,” said Christina Bowers, a float nurse at Lancaster Medical Center. Bowers’ job will require her to move from department to department, and she’ll work harder to achieve the three tenets of Relationship-Based Care.

But at Lancaster Medical Center, the focus on patients and families, teamwork and employee self-care will take center stage and guide decisions. That’s why she came here. “It’s so nurse-focused,” she said. “We have a lot of input.”

And so do many others. Cheryl Bealer, a certified wound ostomy continence nurse, said she’s been impressed at the all-inclusive nature of the training. In her session with Rollman and throughout her time during the hospital’s planning stages, she’s been rubbing elbows with top hospital brass and upper-echelon executives.

Storytelling among participants is an important component of Relationship Based Care – and not just the eye-to-eye, knee-to-knee variety, which exemplifies the kind of laser-like focus you need to be truly patient- and family-centric. During their Relationship-Based Care training sessions, employees share stories of moments where relationship-based care worked.

During her session, Bealer shared a story from another Penn State Health hospital – Penn State Health Milton S. Hershey Medical Center. She’d taken her 12-year-old son there for a procedure around Thanksgiving. Before the hospital was scheduled to distribute a special holiday meal, her son asked for a grilled cheese sandwich. She told him it probably wouldn’t happen because the hospital had so much to coordinate for the holiday.

His meal arrived at lunchtime. When she removed the cover, she found not the standard turkey dinner, but a grilled cheese sandwich. Her son was thrilled.

“There are many other organizations where that wouldn’t have occurred,” Bealer said. “It was very relationship-based for my child. It wasn’t just listening. It was listening with intent.”