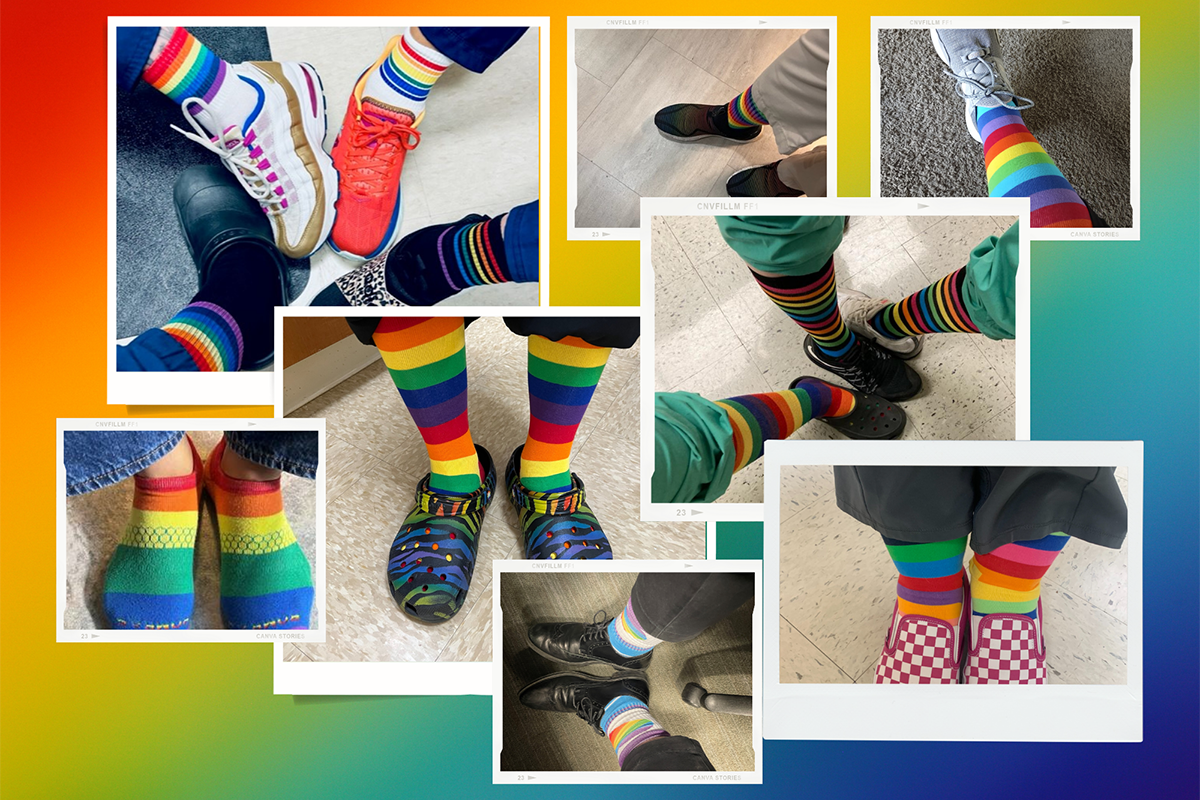 Many Penn State Health employees wore their rainbow socks on Oct. 11, National Coming Out Day, to show their support as allies for sexual and gender minority patients and colleagues. This year’s National Coming Out Day “Sock Out Bias” event focused on recognizing and eliminating bias against lesbian, gay, bisexual and transgender patients and employees.

Some Penn State Health employees shared what participating in “Sock Out Bias” on National Coming Out Day means to them:

“’Sock Out Bias’/Coming Out Day is an important event at Penn State Health because it brings visibility to the presence of the LGBTQ+ community,” said Derek Knisely, an MRI technologist who works primarily at Penn State Health Hampden Medical Center. “One of the most important aspects of this visibility is allowing our LGBTQ+ patients to feel comfortable and validated in this space. It is important to me, as a queer man, because it reinforces Penn State’s commitment to being an inclusive, safe and affirming space for staff, patients and visitors. This event helps remind everyone that queer existence, identities and relationships are valid and valued here at Penn State Health.”

Erin McCurdy, a telecommunications operator at Penn State Health Holy Spirit Medical Center, said, “National Coming Out day is very special to me because I know what it was like to be in the closet. When I came out, I was free and was able to finally be my true self. My co-workers and I wanted to wear our rainbow socks to support everyone in the LGBTQ+ community!”

“The ‘Sock Out Bias’ day held on National Coming Out Day is very meaningful to the LGBTQ community in that it shows support, acceptance and understanding of the dynamics we exhibit, as well as issues facing who we are,” said Brad Mikitko, an MRI technologist at Penn State Health Medical Group – Lime Spring and co-chair of the LGBTQ+ Business Employee Resource Group in Dauphin County. “This display of rainbow socks gives hope and encouragement to those who may not be comfortable with their place yet in the community, and there is comfort in knowing our organization is fully engaged in those special moments. I applaud and have gratitude for all those who support the LGBTQ community here at Penn State Health every day.”

Peggyann Harned, a medical office associate with Penn State Health Medical Group – Palmyra, shared, “I grew up with a brother who is gay and have always been very supportive of him. Now as an adult I have a gay child and I would do anything to make sure they do not have to go through the same struggles my brother went through.”

Rachel Weber, a data manager in the Department of Public Health Sciences in the Penn State College of Medicine, shared: “This day is important to me because I have close family members who were nervous to come out to me and still aren’t comfortable coming out to the rest of our family. It breaks my heart that they don’t feel entirely safe in family spaces where they should feel entirely loved and supported. My quiet acceptance wasn’t enough, so now I take any chance I can to be visible and vocal in my support for the LGBTQIA+ community, in my family and beyond.”

Showing support for eliminating bias against LGBTQ+ colleagues and patients took on additional significance this year because, for the second year in a row, LGBTQ+ Americans have reported an alarming increase in unjust treatment, including bias, according to the 2022 Accelerating Acceptance report by the Gay and Lesbian Alliance Against Defamation.

“National Coming Out Day provides our health system with the opportunity to reinforce our values that include respecting everyone, regardless of their aspect of diversity,” says Lynette Chappell-Williams, Penn State Health vice president and chief diversity officer. “I am proud that our organization is committed to equity and inclusion and that so many employees joined in to show support for equity for our LGBTQ+ employees and patients.”

Observed in the U.S. and countries around the world, Coming Out Day was founded in 1988 to raise awareness of the LGBTQ+ community and its civil rights movement. Oct. 11 marks the anniversary of the 1987 National March on Washington for Lesbian and Gay Rights.