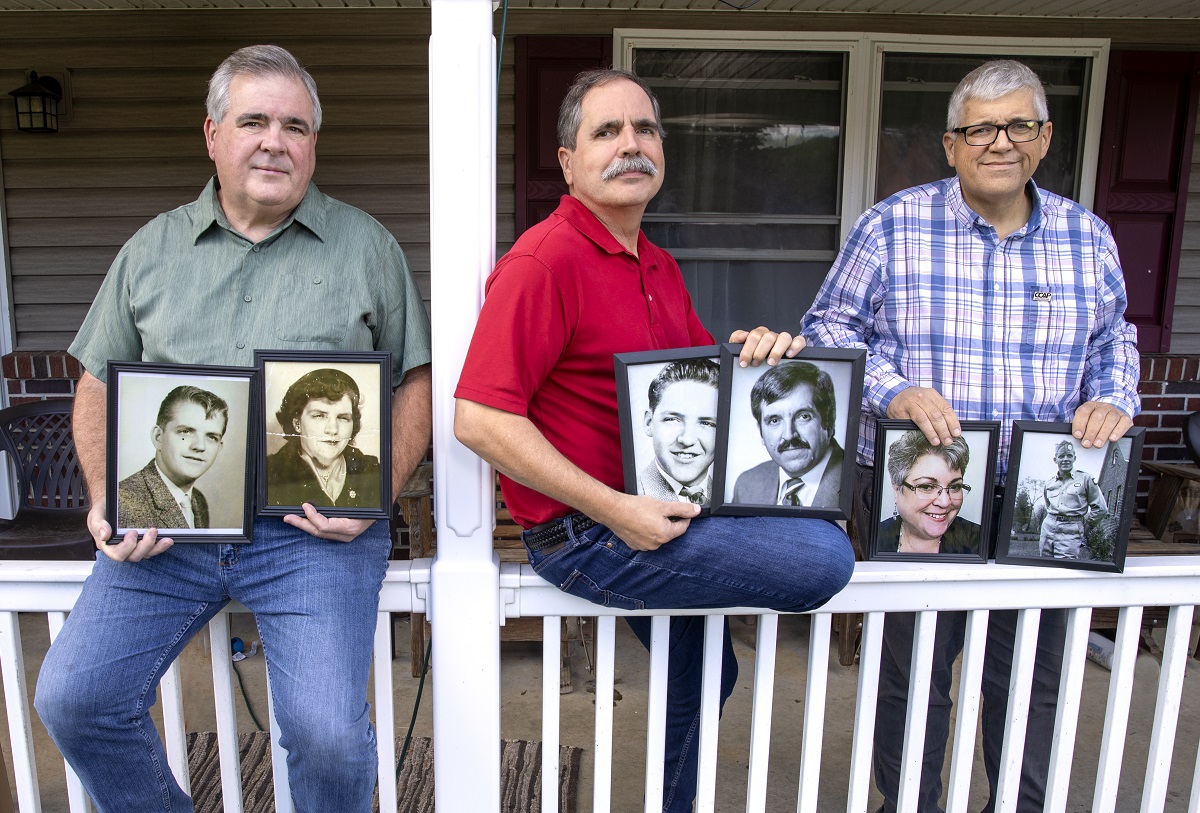 The three brothers from the Harrisburg area would rather lovingly poke fun at one another than lose sleep over what’s ahead.

“Those two losers?” quips the baby brother, 56-year-old Brian Allen, when asked about his two siblings.

“My brother’s initials are BS,” says the middle one, Gregory Allen, 62.

“My brother buys 200 lottery tickets a day. Calls it his retirement program,” says big brother Steve Allen, 64. He would know – he retired from a job working security for the Pennsylvania Lottery.

Their lightheartedness toward life’s peccadillos comes from a dark place. None of the three expected to still be alive. Their grandmother died at age 43 of congestive heart failure. Their father died of the same illness at age 58. So did three of his brothers. A sister, Karen, died of cancer last year, but she’d also developed heart disease.

So, it came as no surprise when in 1998, Steve was diagnosed with what’s become the Allen family illness. Brian and Greg came tumbling after like dominos with their diagnoses in the years that followed. All three got pacemakers, implanted defibrillators and prescriptions and accepted their fate. Life was too fleeting for anything else. After all, like the loaves of bread their father kept on the shelves of the grocery store he ran on 6th Street in Harrisburg, everyone comes with their own expiration date.

But sometimes, even in a short life, you can hit the jackpot.

Two jackpots are practically unheard of.

As freakish luck would have it, none of the Allen boys have reached their sell-by dates. In March, Penn State Heart and Vascular Institute at Penn State Health Milton S. Hershey Medical Center secured a new heart for Greg. He was the third Allen to receive his transplant at the Hershey hospital. Brian got his in 2009. Steve’s came in 2015.

And today, instead of accepting their fate, all three Allen brothers are better than ever and facing something they never thought they’d have – a future. 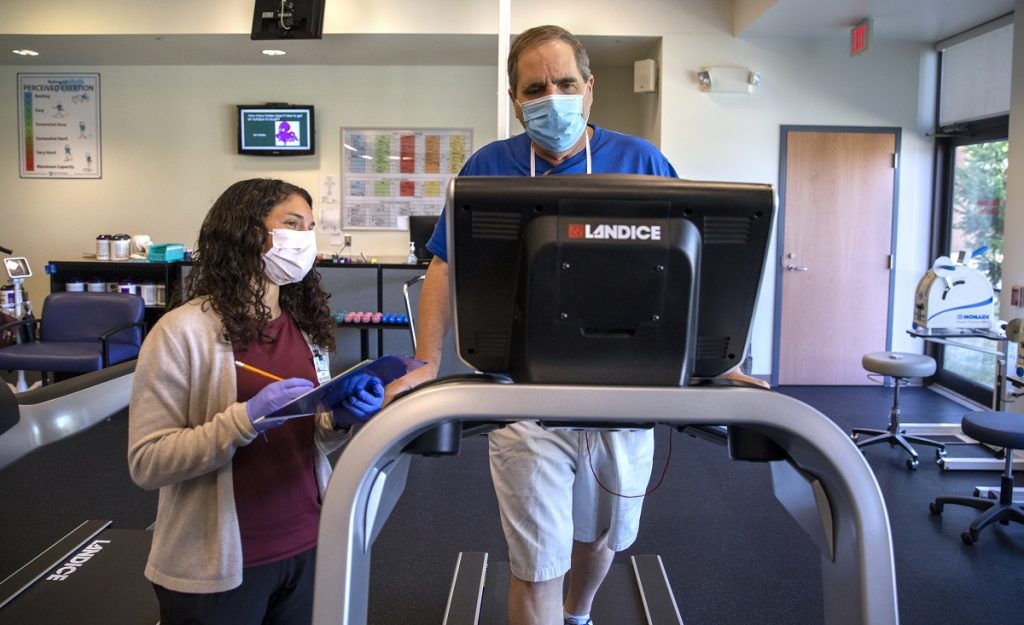 Laura VanderBrook, an exercise physiologist at Penn State Heart and Vascular Institute, looks over Greg Allen’s shoulder during his rehabilitation after his heart transplant in March.

A few years ago, the Institute tested Brian’s genetics and discovered what might be the culprit. “We found an abnormality on a gene that’s often associated with severe cardiomyopathy,” said Dr. Eric Popjes, the cardiologist who treats all three Allens. They found the defect in what experts have determined to be one of the more common genes involved in dilated cardiomyopathy, “but probably the worst in terms of severity of the disease,” Popjes said.

Hearts affected by congestive failure become enlarged and unable to pump blood to the rest of the body. As the disease progresses, the hearts replace useless muscle with scar tissue. In the Allens, the left ventricle ― the part of the heart that pumps blood out of the aorta ― of all three hearts were riddled with scar tissue.

“You just feel so tired all the time,” Greg said. “That’s the best way to describe it. You have to work just to stay focused on what you need to do.”

Doctors gave Greg his official diagnosis five years ago and installed a pacemaker to keep his heart pumping, just as they’d done with Brian and Steve. Given the family history, it wasn’t exactly the surprise of the century.

Of the brothers, Steve was first diagnosed with congestive heart failure in 1998. He’d spent most of his career with the Susquehanna Township Police Department, before spending stints with the Pennsylvania Department of Corrections and the state lottery as a fraud investigator.

Steve had gone to seek medical help for pain in his shoulder, and doctors became concerned about his heart. He thought the pain he’d been feeling in his bread basket was indigestion. Doctors installed a defibrillator, which would shock his heart into beating again if his illness prevented it. He received four more defibrillators over the years. As the disease worsened, shocks became more frequent.

Even after he started getting treatment, the illness became too troublesome to ignore. One day, he was driving his car down a four-lane highway and blacked out. Next thing he knew, he was coming to in a field after missing a guardrail by a few feet.

As it turned out, his youngest brother, Brian, became the first Allen to get a new heart.

Brian, a Perry County Commissioner who owns his own sporting goods store, had seen other doctors before, but no treatment seemed to do the trick. He’d had a pacemaker installed. “It just never felt right,” Brian said.

He’d begun to swell. “I was drowning from the legs up,” he said.

Steve told him to see his doctor, Dr. Jerry Luck, a long-time heart doctor at the Institute who passed away in 2015. Luck recommended he see Dr. David Silber at the Penn State Heart and Vascular Institute ― IO Silver Clinic. Silber told him he needed a new heart. Urgently. He immediately put Brian on the transplant list.

Months passed. Brian spent three of them in a hospital bed at the Milton S. Hershey Medical Center. “You’re at the point where we might not be able to help you anymore,” Silber told him. His next stop was an artificial heart ― a large, pneumatic device that would replace his flesh and blood one. The chances of living much longer were slim. “My odds kept getting longer,” Brian said.

He was ready to make the call for an artificial heart when a pastor friend stopped by. The two of them prayed. Twenty minutes later, Brian’s doctor received the call. A heart had become available.

His heart was due to arrive on a cold February day in 2009, but snowfall made flying it in impossible. But Dr. Ted Stephenson performed the surgery after a team of health care workers from the Institute took a convoy of sport utility vehicles over icy roads to pick up Brian’s new heart.

Six years after his little brother became the first Allen to receive a heart transplant, Steve became the second. His implanted defibrillator began to fire more often, shocking his heart back into beating properly. Dozens of shocks. “Every time is like driving a sledgehammer into your chest,” he said.

Within three months, Steve got the call. Dr. Kentaro Yamane implanted the heart on July 29, 2015. Within two weeks of his operation, Steve was home in Camp Hill, walking around the cul-de-sac in his development. The following March, he caught a virus, but his doctors at Hershey Medical Center knocked it down in about four days.

Every day, his walks grew longer.

Five years ago, the tiredness started in with Greg. Doctors diagnosed him with the old Allen culprit. He was 56 at the time and thought the family ailment might have missed him.

“When I found out I was sick … well, now you know how important every day was,” Greg said.

He went on the transplant list, and before long a heart became available. On March 10, doctors prepared him for surgery as the heart was flown into Hershey. It snowed a little in the morning, but conditions weren’t as bad as the day of Brian’s transplant.

As if the Allens’ story didn’t have enough coincidences, the name of the man who marched through the door with Greg’s heart was Steve Allen.

Greg lay in the operating room, waiting for surgeon Dr. Balakrishnan Mahesh to remove the old heart from his chest, which he heard later “looked like an old, deflated football” and install the new, healthy one. He looked up at all of the doctors and nurses milling around him in the Institute’s operating room. He’d met others in the days leading up to his surgery. Dozens of people were working to keep him alive.

In that moment, “I felt like I was the most important person in the world,” he said.

He thought of his family waiting for him. Ever since he received his diagnosis, he’d tried successfully to remain upbeat, not to take it out on them. And he hadn’t been angry with God. A man of faith, Greg attends Linglestown Life United Methodist Church regularly. “Faith is what’s going to get you through this,” he told himself.

He thought of his two brothers, both of whom had been in this exact spot before, who’d been able to help such a monumental surgery lose its sharper edges. “We always pull for one another,” he said.

He hadn’t wept until then. “I’m not a tough guy by any means,” he said. “But all those people were there for me. It was overwhelming.”

Healthy and not looking back

The brothers, Popjes and his colleagues at Penn State Health call them. 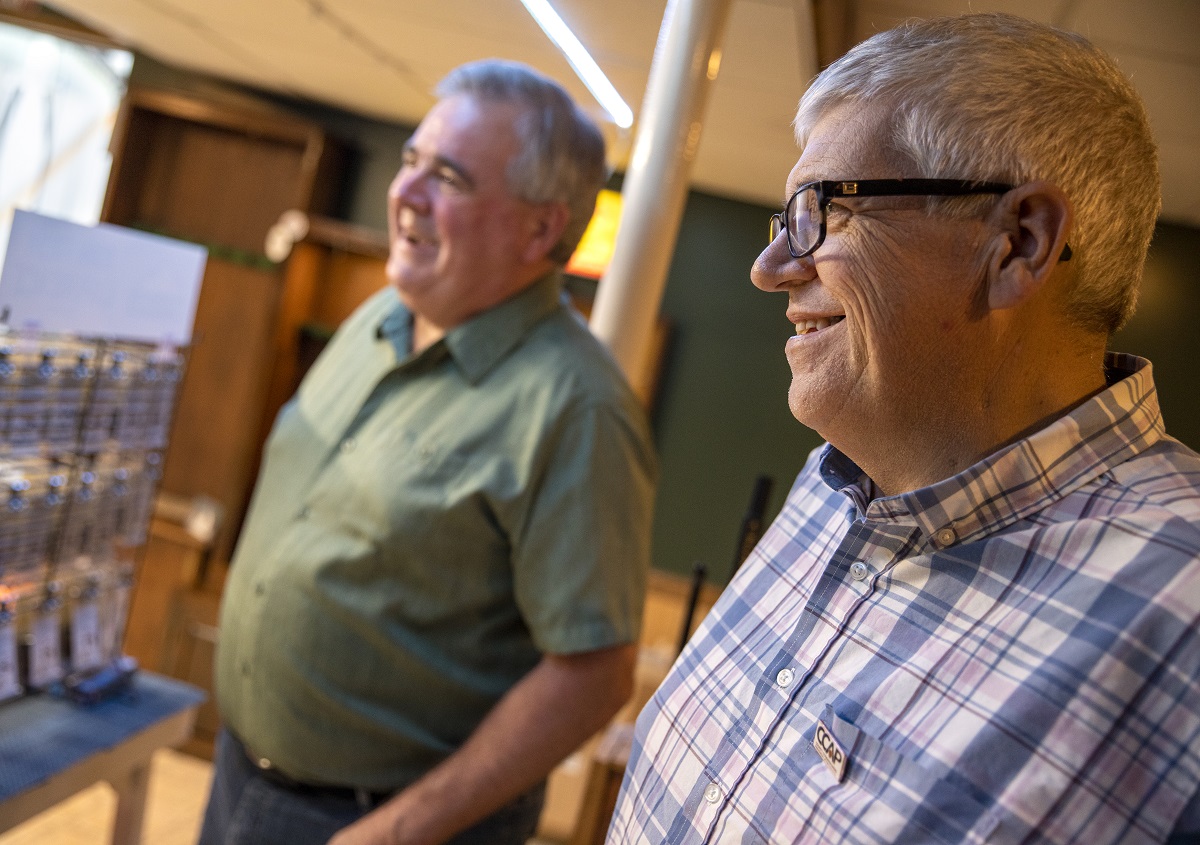 Despite the serious nature of their heart conditions, brothers Brian, foreground, and Steve Allen, never lost their sense of humor

“We talk about them a lot,” he said. The Milton S. Hershey Medical Center performed its first heart transplant in 1984, and since then hundreds of heart patients have undergone the procedure. A few pairs of siblings or parents and their children have received hearts at Hershey. They’ve performed transplants on two family members from time to time, but never three brothers. When you say, “the brothers” everyone knows who you mean. They’re celebrities at the Institute.

But they would be popular even if they weren’t so improbable, Popjes said. They tease each other, and they’re fun to talk with.

Steve and Brian hunt and fish. Greg doesn’t join them.

“No, we don’t usually slow down enough to play cards,” Greg said.

It took Brian about two weeks to recover from his surgery. Thirteen years later, his health isn’t perfect. But the heart he obtained in 2009 is still pumping strong.

Greg gets stronger every day. Walks are getting easier. He’s no longer winded going up a hill like he once was. “I feel good,” he said.

He retired from his career as a realtor and is still figuring out what the future will hold. He likens it to looking out the windshield of a car. “Think about how small the rearview mirror is,” he said. That’s how much time you should spend looking backward.

Today, at age 64, Steve takes four prescriptions a day. He sees Popjes once a year. He travels to Florida every winter but spends his summers in the Harrisburg region near his brothers. They all get together regularly.

Steve is enjoying the retirement that once had seemed so unlikely.

“You look at life differently. Little things don’t bother me,” Steve said. “It’s so nice just to be alive.”