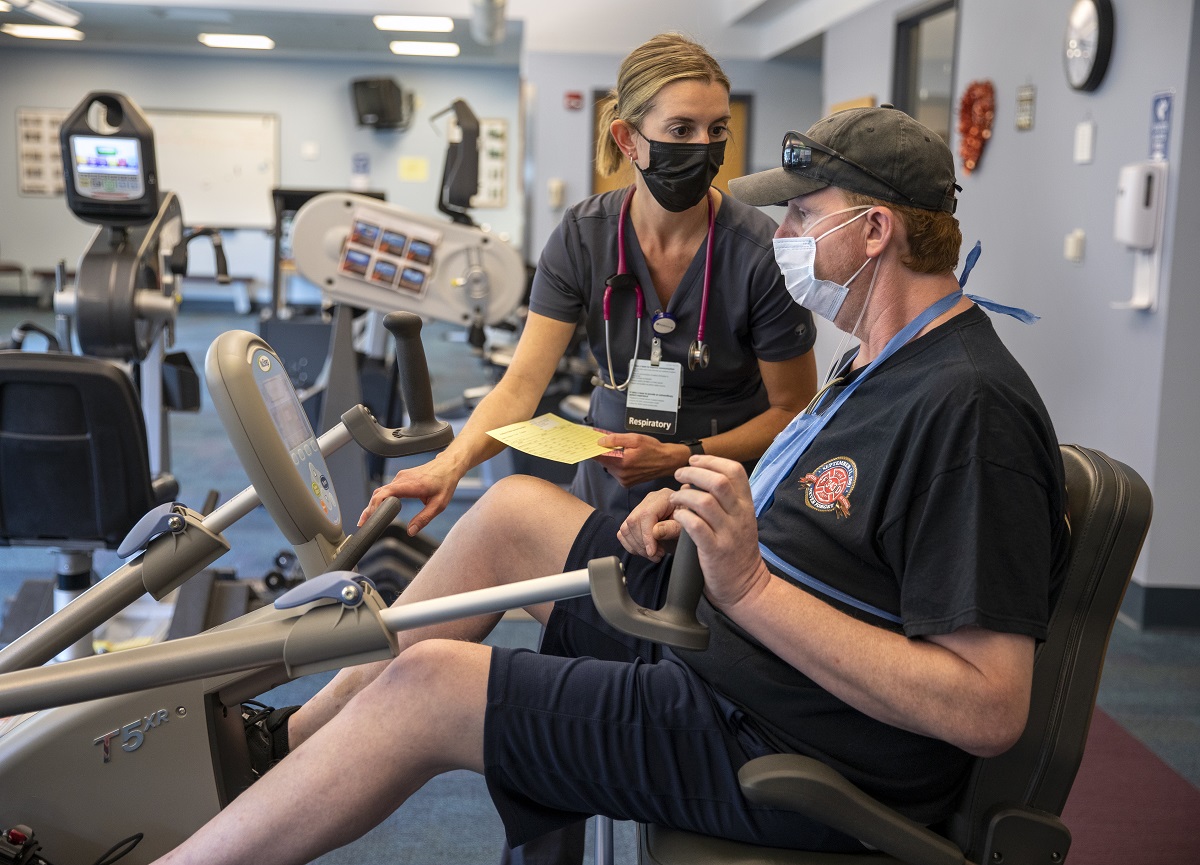 Months into his 147-day wrestling match with COVID-19, Brian Germann had given up.

He could barely move in his hospital bed at Penn State Health Holy Spirit Medical Center. Breath came only in shallow sips. Once a 300-pound volunteer fire truck driver and heavy-equipment operator, his body weight was falling off of him in sheets. Eating no longer seemed worth the trouble.

His wife, Mary, tried to coax him into having a meal. He refused. The nurses, all of whom the couple had come to know during those harrowing weeks and months, worried.

“Can we get you a milkshake?” they’d ask, offering him an Ensure – a nutritional drink often used for people unable to take in sustenance. He didn’t want one. They pulled her aside. “What’s his favorite place to eat?” they asked. “Go get it and bring it here, now.” She’d oblige. He’d nibble. She’d yell at him, “Don’t you want to get out of here? Then eat.”

One night, Mary left crying. “Please let me know how you make out with him,” she said to Lindsey Bernardi, the nurse on duty.

Later that night, Brian needed to blow his nose. Blowing his nose was an ordeal. Unless someone helped him with his respirator, blowing his nose kicked off alarms, and health care workers came running as though he was dying. So, Brian asked Bernardi for help.

“Sure, I’ll help you,” Bernardi told him. “If you’ll drink an Ensure.”

At 11:30 p.m. Bernardi called Mary at home. Brian had eaten, Bernardi said, and his general mental outlook had improved. In the world of inches the Germanns had come to know, it had been a good day.

Brian’s own little corner of the worst pandemic in modern history is both typical and unique. He survived a horrifically long bout with the disease – the longest of any of the hundreds admitted to the Camp Hill hospital when America’s struggle was at its most grim. Unlike many, doctors never used a ventilator to help him breathe or put him into a coma. He was conscious for it all. It withered his body and tested his sanity, and even since his release, Brian is still struggling with the loss of his career and failing health.

It’s the fight of his life, but Brian says he owes every round to the people like Bernardi and moments like the night she baited him into eating. They helped renew his spirit when things were unassailably black. They helped show him there was still something worth living for.

From hospital beds throughout Holy Spirit, Germann watched nurses on the front lines. They visited with him, comforted him, worked overtime just to coax him into eating a few bites of food or help him blow his nose. He got to know them and learned how bad the pandemic had borne down on them all. “It really hurt a lot of nurses,” he said.

And then there’s his wife, Mary, who dropped everything to be by his side and help sustain him. Mary, who at the end of 147 days, was on a first-name basis with practically everyone on every floor of Holy Spirit Medical Center.

‘People can only go so far’

Brian had watched both his parents die. First cancer took his father in 2002. Then in July 2021, his mom died of a blood clot.

A volunteer engineer and driver for Northeast Fire and Rescue, he heard the call when paramedics came to her house and tried to revive her. He went there, watched them do what they could to help her to survive, and when it became apparent she wasn’t going to, he told them to stop.

“People can only go so far,” he said a year later from his living room.  Since COVID-19 nearly killed him a few months ago, he spends most of his time in an arm chair. “I didn’t want to be like that. I didn’t want to be a burden. I’m already a burden on her.” He waves a hand over the tube connecting him to a bottle of oxygen at Mary, who is in tears.

“But I didn’t want to be worse,” he responds.

That was the 47-year-old’s perspective when during Christmas 2021 he was admitted to Holy Spirit Medical Center with a case of coronavirus so severe every moment was a struggle to breathe. It started in early December as what seemed like a sinus infection. A doctor tested Brian and Mary for COVID, and it came back positive.

Mary, who’d been vaccinated, took medicine, and eventually received an antibody treatment. Brian, who hadn’t been vaccinated at the time, but is now, felt worse and couldn’t return to his job at the Pennsylvania Department of Transportation. At a follow-up appointment, a doctor discovered the oxygen levels in his blood were around 60%. Normal is 95%. The doctor told Mary to rush Brian to an emergency room, so she took him to Holy Spirit Medical Center.

Brian Germann and his wife Mary chat on a cell phone while he recovers.

When Dr. Chris Shaffer, a Penn State Health pulmonologist, first met Brian soon after he was hospitalized, he needed a lot of oxygen to survive. Brian had first gone to the third-floor cardiovascular unit. Another doctor wanted to put him on a ventilator, but Brian was opposed to the idea. He thought of his mother and his opposition to prolonging life when it’s too late. People can only go so far, he thought.

Not that that’s true of ventilators – throughout the pandemic the devices saved countless lives. “But I sensed he was nervous,” Shaffer said. “He wasn’t letting on, but I could tell.”

Shaffer believed Brian would be able to breathe without the vent, and opted to take him to intensive care where doctors could keep him on oxygen using bipap non-invasive ventilation alternating with  a nasal respirator and monitor his progress.

Christmas came and went. Brian wasn’t there. Hospital policy geared to protect Mary didn’t allow her to visit him. She felt desperate.

Early into his stay, Brian needed a letter explaining his absence from work. Mary couldn’t visit and was worried about how she’d make it happen. Then one day, she received a knock at her door. Shaffer introduced himself and handed her the letter. “I never expected service like that,” she wrote the hospital later.

Finally, the day after Christmas, she got a phone call telling her the rules had changed and she could see him. “I’ll be there in 10 minutes,” she said.

Then, days and weeks began to heap up like snowdrifts. Mary got to know the people at the security desk and the staff. She and Brian saw a hospital filled beyond capacity with the pandemic. They watched hospital employees wheel empty stretchers past in the hall. They returned with them weighed down by body bags, trailed by health care workers dealing with loss.

“The nurses, they were the best thing at that hospital,” Brian said. “Because I was there so long, they would come in and talk just to visit. A lot of times, they’d say how bad it was [earlier in the pandemic]. They would sit with the patients as they died. And the family couldn’t even come in to see them. It was hard.”

While he was still in the ICU, firefighters from Northeast Fire and Rescue and other emergency responders put on a parade past the hospital to lift his spirits. They wheeled him to a window so he could watch. On one hand, Brian was grateful for the gesture. On the other, he wondered if he’d ever ride with them again.

Life veered from boring to terrifying. Most days, he watched TV. Shows about cooking, like the Food Network’s “Diners, Drive-ins and Dives” became favorites, even though – or perhaps because – he couldn’t eat. Think about the weight of a gallon jug of milk. Brian lost 13 of those – 111 pounds – during his stay at Holy Spirit. He’d look down at his body and marvel about where it had all gone.

On other days, he felt like he was dying. His breath became so shallow he seemed unable to catch it. Alarms would sound. Nurses would arrive and work to calm him down. Eventually, he’d breathe easier – or what passed for easier to Brian in those days.

Through it all, Mary acted as his advocate. When he moved to a new room, she made sure he had a window to look out of and a chair to sit in. The couple developed a growing list of nurses whose help ranged from simple kindnesses to lifesaving care. After Brian’s discharge, Mary called Nurse Manager Brynn Strine and ticked off a list of those they wanted to thank that included the aforementioned Bernardi:

Seventeen weeks to the day after Brian had been admitted to Holy Spirit Medical Center, his health care team decided he was well enough to go outside. Boyer pushed him out the doors in a wheelchair and took him on a short roll around the grounds. “You don’t know how much you appreciate hearing the birds. Just hearing traffic going past. Smells,” he said. He chuckled. “It was … different.”

Brian likes to show you a video of his homecoming on his cell phone. He arrives at home. Friends and well-wishers are watching as the now shockingly slender man arrives, tube attached to his nose. “Anybody got a cheeseburger?” he asks. Everyone laughs.

Life after COVID is far from perfect. A large portion of the tissue in his lungs hasn’t recovered, so Brian still relies on oxygen tanks to breathe. He spends much of his time in his house in Enola. He’s not sure what the future holds, which is at times worrisome given the mountain of medical bills he’s accumulated. Mary spends a lot of her time scouring the internet and reaching out to legislators.

He still visits Holy Spirit for pulmonary rehabilitation. “At this point, to an extent, I don’t expect his lungs to get back to normal,” Shaffer said. “I’m not sure how much lung function he’ll get back, but his breathing is not going to be normal going forward.”

He’s eligible for a lung transplant, but Brian says he’s not interested. Lung transplant recipients survive for only five to 10 years. And that’s not enough time.

He still visits his friends at the firehouse for the occasional dinner, bringing the oxygen tanks with him. Occasionally, he’s sat in the cab of the fire truck or thinks wistfully of the motorcycles he opted to sell. He’s never thought of a job other than what he’s done before.

The future is a big question mark. Brian wants to be there to see what the answer is. People can only go so far, Brian says, but he hasn’t gone far enough yet.

He’s grateful for all those who fought to keep him well.

Most of all, he’s grateful for Mary.

“Some people go through this without anyone,” he said. “I can’t imagine that.”