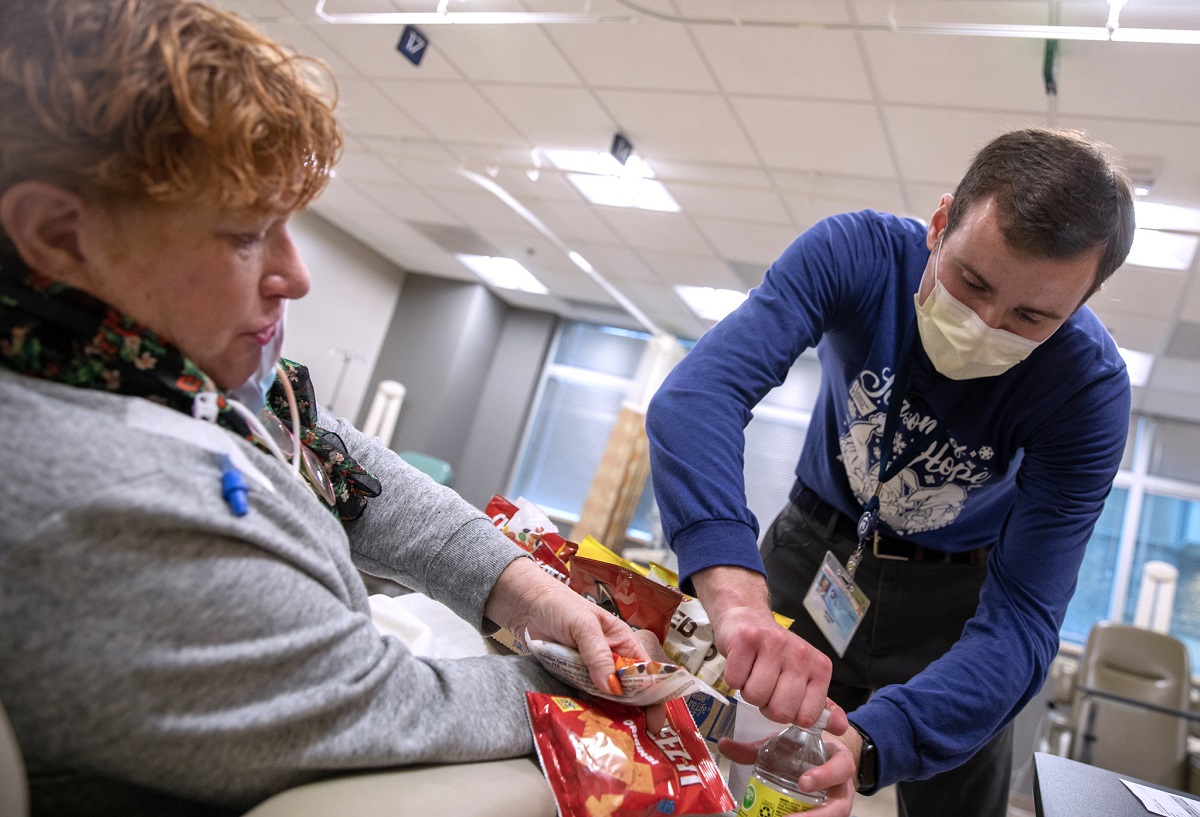 Nathan Creveling is on a mission.

Just before 9 a.m., an Uber drops him outside Penn State Health St. Joseph Medical Center on Bernville Road in Reading. He makes his way through the hospital with efficient, purposeful strides. In a staff room in the Oncology Department, he hangs his jacket from a hook and glides into the infusion room to begin his shift.

“Good morning, Tina,” Creveling says. His voice is a throaty tenor that even under his surgical mask has a smile for everyone, from total strangers to best friends. Creveling always remembers your name. And often he knows just what you need. Want a blanket? Prefer a can of ginger ale to a bottle of water? Even if he only heard it once before, it’s a permanent record, an indelible entry into what seems to be the inexhaustible database inside the trim 22-year-old’s mind.

Creveling was born with autism, but his life, and what caused St. Joseph Medical Center and so many others to fall in love with him, isn’t defined by its limitations. Rather, its trajectory is focused by what he can do: His ability to recall names, facts and numbers is startling. His diligence in even the smallest, most banal tasks is unwavering. He’s a medal-winning, multisport athlete ― a swimmer and a soccer player.

And then there’s Creveling’s compassion.

Every day at St. Joseph Medical Center, that’s his mission.

“We all wish we could be a little more like Nathan, you know?” Larish says. “Because he never has a bad day.”

The infusion room is lined with leather-cushion chairs for patients receiving treatment for cancer. Sometimes they sit for hours, tethered to bags of medicine doctors hope will help them wage battles with illnesses that have brought their lives to screeching halts. Some are tired and weak and speak in thin voices.

As the St. Joseph Cancer Center ambassador, Creveling guides many of them in from the waiting room and remembers each and every name. He offers them a blanket, a pillow, a snack or a drink and good-natured small talk.

When he’s not doing that, he helps Larish with the stocking and cleans and sterilizes everything. Each chair gets the same level of focus – as if their cleanliness was as important as the surgery happening elsewhere in the hospital. Using spray bottles of disinfectant and rags, Creveling attacks each one systematically, never losing focus, even using a plastic knife to scrub inside seams in the leather.

“I don’t worry whether he’s doing his job,” says Larish, who taught Creveling what to do. He first landed an internship earlier this year through Project SEARCH, a transition-to-work program that helps people with disabilities enter workplaces. The team members in oncology were so impressed with Creveling, they created the ambassador job just for him.

“From the first day on he was very, very good with patients,” Larish says. “He picked up on things very quickly. I would attribute a lot of that to his parents.”

‘He’ll know you for the rest of your life’

Creveling’s mom, Kris, is a teacher’s assistant at Wilson School District in Berks County. His dad, Bob, is a marketing executive. They worry about their son the way all parents worry. Maybe a little more so. Nathan is talking these days about living on his own and driving. He takes online road trips. On the internet, he visits Google Maps, picks a destination, calls up the street view on his computer screen and scrolls his way to someplace like Maine. He spends hours just scrolling over the highways and committing the road names to memory, never leaving his desk.

But he wants to go for real. Lately, he’s been talking about driving instead of catching an Uber ride to work. Kris and Bob are cautious, but not because they fear a spate of rebellion. “Nathan is the biggest rule follower in town,” explains his sister, Sarah. One reason why he’s so good at his job is his avowed sticklerism – give him an instruction, and he follows it to the letter. The family worries about a moment where to avoid an accident you have to compromise with the rules.

But like everyone else, they have a lot of faith in Nathan. When he was 4 years old, he had trouble communicating at his day care, which was strange. He was intelligent, but his vocabulary hadn’t caught up with the rest of his brain. They tested him and found that he had moderate autism. The family tried an intervention called Applied Behavior Analysis to understand how Nathan could react to real-life situations. The analysis uses regimented schedules. Early intervention made all the difference, Bob says. “With all of the training he got over the years, that made him who he is today,” Kris said.

Another key ingredient was the Hogan Learning Academy, a special education school where he started in seventh grade and never looked back. “That’s really where it all started for him,” Kris said. He thrived in the smaller class sizes, and his confidence and skills improved.

And at St. Joseph Medical Center, all of it just clicked. His skills and personality. His focus on following rules.

And of course, the name thing.

“Somebody taught him that was a polite thing to do,” Sarah says, “so he did it for the rest of his life.”

“It’s selective memory,” Kris says. “He’s very much a people person. He wants to know you, and he’ll know you for the rest of your life.”

Jane Pizarro, a licensed professional nurse at Penn State Health Downtown Campus, arrives and sits in one of the chairs. She’s here for her own cancer treatment. She asks Nathan for a cranberry juice and water. He retrieves it and helps her adjust the TV.

“I’ll be asking for another snack at one o’clock, Nathan,” she says.

“OK, well, I’ll see you later, Jane,” Nathan says and goes back to wiping down chairs and unpacking boxes.

Pizarro watches him go. Remembering a patient’s name is a gift for someone when they need it most, she says. “It makes you feel good,” Pizarro says. “And it fits in with St. Joe’s. We’re like a big family. We all know one another.”

On the opposite side of the room, Valerie Frymoyer is about to start another round of chemotherapy to slow her lung cancer. “I’m doing good now, but it’s like a yo-yo,” she says. “I’m dreading the chemo because it usually makes me not so good for two or three days.”

But any time she gets to see Nathan, “It’s a pleasure,” she says.

Frymoyer worked for decades as a teacher’s assistant in special education. She’d known kids who were living with autism and marveled at their special abilities. One boy was an artist who could make detailed architectural drawings, “but he couldn’t make a peanut butter and jelly sandwich,” she said. She often despaired when she saw so much potential lost as the disorder’s limitations forced a child to detach from society.

But she’s never met anyone quite like Nathan – an athlete, a people person who remembers her name and what she wants. “It’s a pleasure,” she says again.

Herb Deitrich takes a chair and grins at Nathan. Deitrich has been a regular in the infusion room for seven years for what started as throat cancer but has now gone to his lymph nodes.

By coincidence, Deitrich discovered he had a connection with Nathan. His grandson, Gabe, also has autism and is learning gymnastics at a local gym where Nathan volunteers. Nathan mentors Gabe, who doesn’t speak.

Click on the image below for a gallery of photos 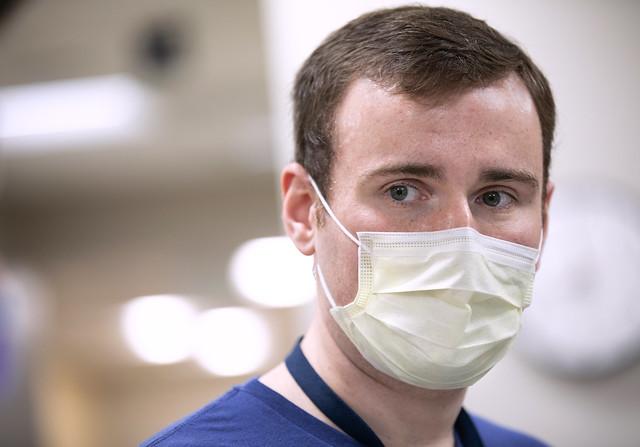 But Nathan has overcome it by showing Gabe how to do certain moves. “He’s an all-around good guy,” Deitrich says, furrowing his brow to remember. “He’s a good swimmer …”

Deitrich chuckles. “That’s right. He’s just very positive. Upbeat.” He holds up a finger. “And another thing. Once he learns your name, he’ll never forget it.”

Nathan takes a 30-minute lunch break at noon. He always leaves on time and has never once been late in returning. On this day, Sandi Bright, a registered nurse, is having her lunch at the same time in the room where Nathan hung his coat.

Like her co-workers, Bright is both charmed and mystified by Nathan. Once, he asked her when her birthday was ― month, date and year. When she told him, he looked thoughtful for a moment. “That was a Wednesday,” he told her.

Nathan takes the time to get to know everyone. Registered Nurse Deanne Hiddemen likes to tell the story about a new hire named Marie. Nathan gave her his “Hi, my name is Nathan. Are you new here?” line. Marie said she was. “You’re going to love it here,” Nathan told her.

The name Marie, of course, was filed into the databank never to be forgotten. But Nathan had given an opinion, which is what makes the story significant.

If you’ve just met him, the name memorization skill might seem like a safety blanket – a robotic quirk. Nathan seldom offers much in the way of opinion. His constant, detached good-naturedness is one of the few clues that he’s any different from anyone else. You get facts in great detail from Nathan but not always the “why.”

But you don’t have to dig far to find it. Ask Nathan why it’s so important to remember everyone’s name.

“So they don’t feel isolated,” he says.

Had he ever felt isolated? Some time ago, he tested positive for COVID-19. He had to stay home. He couldn’t see his friends at Project SEARCH, play sports or meet new people. He felt lonesome.

He doesn’t want anyone else to feel that way. Ever. And that’s why he does what he does?

And at 12:30 p.m. precisely, Nathan returns to the infusion room to finish his mission for the day.