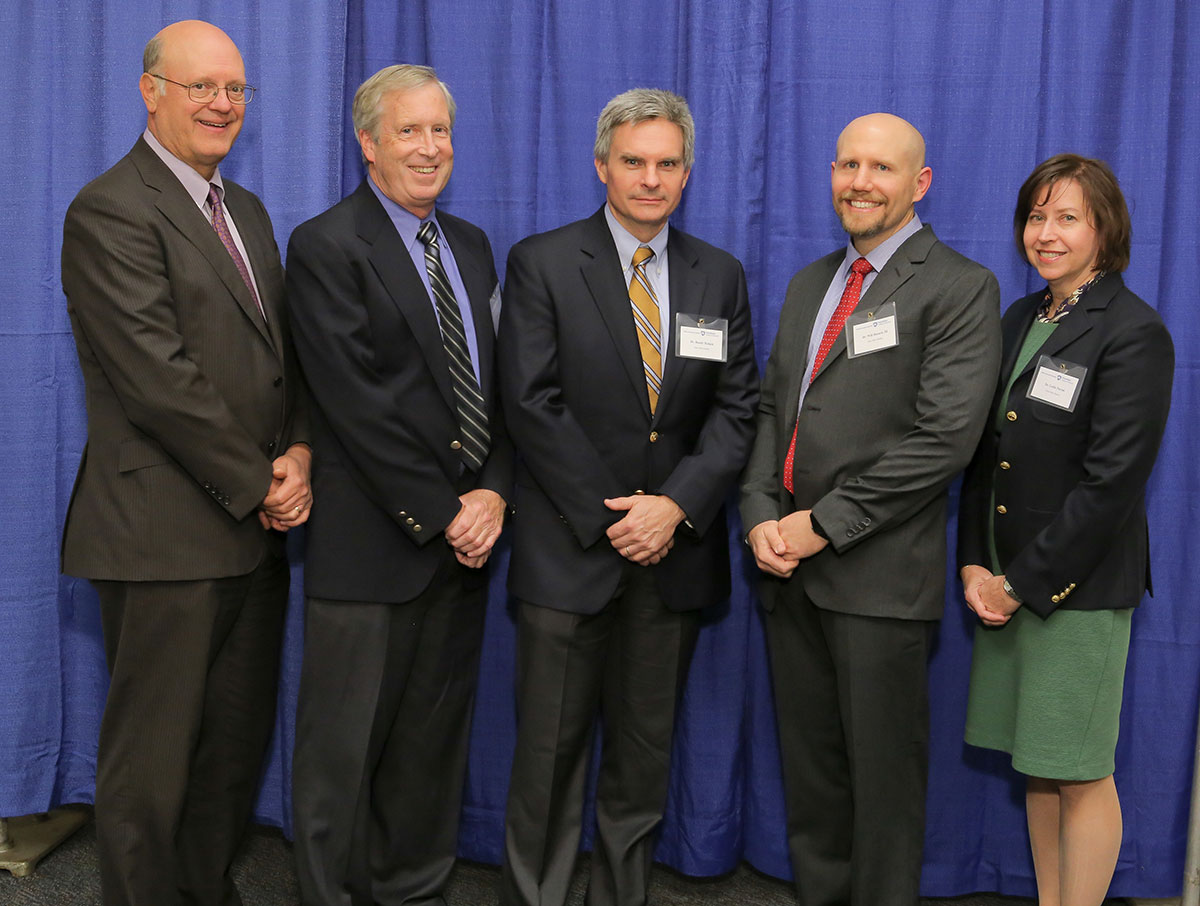 Penn State College of Medicine's 2016 Innovator of the Year award recipient is Will Hazard, MD, second from right. Hazard is pictured with, from left, A. Craig Hillemeier, MD, dean of the College and CEO of Penn State Health; Barry Fell, owner of TPC Design; Randy Haluck, MD, assistant professor of surgery at Penn State College of Medicine; and Leslie Parent, MD, vice dean for research and graduate studies for the College.

The annual Innovation Awards event at Penn State College of Medicine recognizes faculty, staff, postdocs and students in the innovator community. Individuals are recognized for moving their innovations forward by executing a licensing agreement, earning a patent or starting a company based on Penn State technology during the preceding year. This year, the sixth annual Innovation Awards ceremony was held Oct. 27, 2016. Pharmacology department PhD student Sam Linton was recognized for his service to support commercialization and the research enterprise at the College of Medicine and Hershey Medical Center.

Finally, awards were presented in three categories that had been open to nominations from across the College.

2016 Student Award for Excellence in Innovation Yan Leyfman received the 2016 Student Award for Excellence in Innovation.

Two students were nominated for this year’s award, Yan Leyfman and Oliver Mrowczynski. Yan Leyfman was the 2016 recipient of the award.

From his nominator’s letter: “Yan is an extremely motivated and diligent, with the dedication to inspire change. Upon re-establishing the Hematology-Oncology Interest Group, he has led a transformational movement of the club. To expose students to the various oncological sub-specialties, Yan started a Career Exploration Lunch Lecture Series. Yan’s leadership, devotion, and desire to innovate were recognized when his group became the first cancer student interest group in the country, and one of only 32 groups nationally to receive accreditation from the American Society of Clinical Oncology. I am proud of the strides that this group has taken under Yan’s leadership, but like a true entrepreneur, Yan always strives to innovate, and I can only imagine the success that this group will achieve in the coming year.” 2016 Innovator of the Year Award

The culmination of the Innovation Awards ceremony is the announcement of the Innovator of the Year Award. This prestigious award is given to a faculty member who has been recognized by peers for a demonstrated track record of innovation; developing new technologies, processes or services; taking an entrepreneurial approach to translational research; and as a collaborator and active participant in the innovation community.

Dr. Hazard has formed a start-up company, inTRAvent Medical LLC, to develop his idea, under a pending patent application.

Dr. Hazard was able to refine his innovative concepts and to solve a critical clinical need through various phases of development and execution. These phases were honed by his extensive work interviewing countless individuals in the medical community to define the needs of his target customers and significantly improve patient outcomes.

After winning proof-of-concept awards and raising several rounds of seed funding, Dr. Hazard engaged several engineering groups inside and outside of Penn State to develop the needed technology to make his vision a reality.

In addition, shortly after founding inTRAvent Medical, Dr. Hazard assembled a management team, secured financing and engaged legal and market development support with the goal of having a viable, FDA-approved product to market within 48 months.