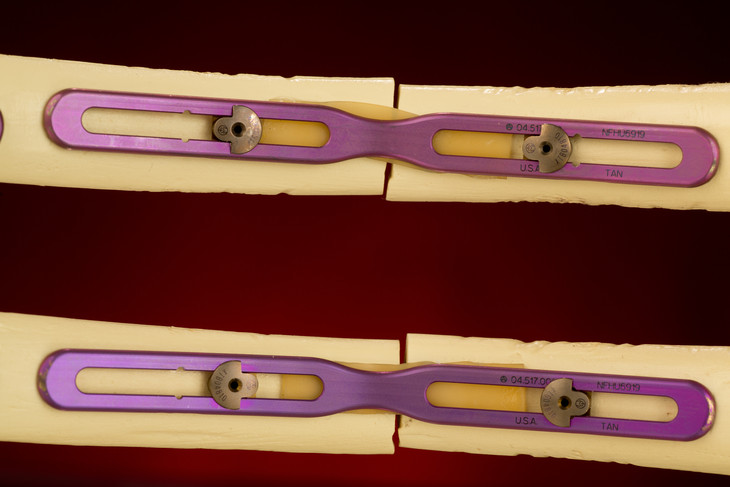 In the new AdvantageRib system, the fixation plate is attached to the inner surface of the rib using fiber optics, very small incisions, and a procedure Dr. Randy Haluck compares to building a ship in a bottle. The new method is much less invasive than existing ways of stabilizing or "fixing" broken ribs.

“There's gotta be a better way.”

Dr. Peter Dillon, chief of surgery at Penn State Health Milton S. Hershey Medical Center, likes to drop in on his doctors at work, and on that day in early 2010 he was watching as staff surgeon Dr. Don Mackay affixed thin metal plates to the broken ribs of an elderly patient. Mackay had modified the standard way of fixing ribs, making it less traumatic for patients, but the procedure was still long, laborious, and somewhat bloody.

“I just said, there's gotta be a better way,” recalls Dillon. “Why can't you do that minimally invasively?”

To devise a better way to ‘fix,' or stabilize, broken ribs, Mackay and Dillon enlisted the help of Dr. Randy Haluck, chief of minimally invasive surgery at the Medical Center, and Barry Fell, a biomedical engineer whose company, TPC Design, specializes in orthopedic devices such as artificial hips and knees.

In 2013 the group filed patent applications for the new system and licensed it to Synthes, the market leader in conventional rib repair hardware. Because it uses materials and methods—stainless steel, titanium, thoracoscopy—already approved for use in patients, it did not have to go through lengthy clinical trials. Instead, it quickly won a “510k clearance” from the FDA.

But it nearly died before it could be brought to market, when mega-corporation Johnson & Johnson bought Synthes and decided not to market the new system. And then, surprising everyone, J & J allowed Synthes to return the license to the group at Hershey.

“We were a little taken aback by that,” says Fell, “but we said ‘Thank you very much!' Because it was already FDA-cleared, it had everything that's required to market the product 90 percent completed.”

To take it the last ten percent, the team sought advice from Kevin Harter, director of Penn State's new Center for Medical Innovation. Then Fell started a business, SIG Medical, to produce and sell the system, now named AdvantageRib, in conjunction with the Medical Center. Ethics rules prevent the surgeons from taking a director's or management role in the business, but they have invested in it, as have Ben Franklin Technology Partners and several private investors. SIG Medical also won the $75,000 top prize at Penn State's Venture and Intellectual Property Fair last fall.

Learn more about the AdvantageRib system in this Penn State News story, with photo galleries.