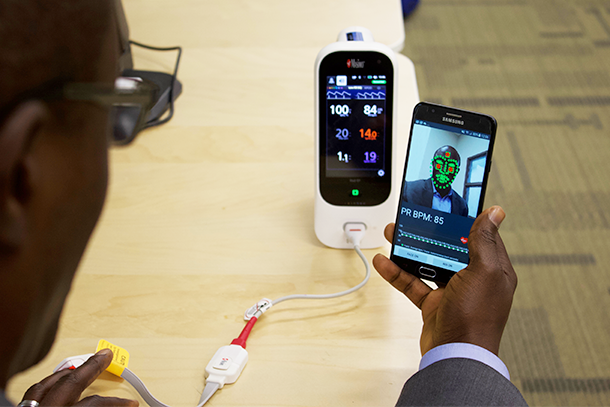 Conrad Tucker, associate professor of engineering design and industrial engineering at Penn State, demonstrates how a mobile-based application will use a cellphone camera and computer vision techniques to capture pulse rate. Tucker's work was supported in part by an award from Penn State Clinical and Translational Science Institute.

Conrad Tucker was giving a talk on the idea of using technology to capture students’ body posture to determine their attention level in the classroom. In the audience was a member of Parkinson’s disease researcher and clinician Xuemei Huang’s research team, who approached Tucker afterward. There was a connection between his talk and Huang’s research into using changes in a person’s walking gait to diagnose Parkinson’s earlier.

The rest, as they say, is history.

“Sometimes, those type of chance meetings are the best opportunities,” Tucker, associate professor of engineering design and industrial and manufacturing engineering, said. It’s led to an opportunity to apply his research in the laboratory into improving human health. That’s the foundation of translational research and the ultimate goal of Penn State Clinical and Translational Science Institute.

“Many of the technologies we take for granted started as basic research in a laboratory that were translated to the general public,” Tucker said. “There are many great ideas sitting on the shelves at research universities and other organizations. It’s difficult to do both basic research and translational research because each takes a substantial time and financial investment. However, both are needed if we’re going to create systems that impact society.”

Tucker and Huang’s idea started as a way to detect symptoms of Parkinson’s disease patients from a distance. Their idea was to use the Microsoft Kinect sensor to capture the walking gait of patients and then use machine learning to detect changes in the gait that could be cause for concern. That project led to two published research papers. While the concept was shown to be feasible, its implementation remained on Tucker’s mind. The technology was inexpensive and off-the-shelf, but required some software customization and setup to get working, barriers that may result in patients not adopting the technology.

The Tucker-Huang collaboration led to a Clinical and Translational Science Institute Bridges to Translation Pilot Grant. These grants are used to explore novel research ideas and promote collaboration across disciplines. Since its inception, the institute has awarded more than $3 million in pilot grant funding which has led to more than $30 million in external grants to continue moving the research forward.

The research community was quickly moving beyond add-on systems such as the Kinect, to using video from devices like a cell phone.

“The challenge became ‘how many capabilities can be miniaturized onto a cell phone’,” Tucker explained. “Journal papers are great, but I also want to create a system that people will use.”

Tucker worked on algorithms that allowed video to be captured in different lighting conditions and be more forgiving of users’ movement for the purpose of capturing vital signs. Video is captured of the user and analyzed in real time. Tucker and his team have shown that heart rate and respiratory function – both of which can indicate potential problems – are reliably captured using cell phone video alone.  Bringing it back to Parkinson’s patients, both of these could be indicators to determine if the patient is taking medication and if it is working.

Tucker’s work has now led to a Bill and Melinda Gates Foundation grant to show that the technology can work in a variety of regions, demographics and the hardware available in resource-constrained environments. Currently, a website has been developed to test the technology and share the project’s findings.  A phone app has also been developed as a solution for areas without reliable Internet access.

“This technology has the potential to not only transform healthcare delivery in developing countries, but also in rural communities in the United States,” Tucker said. “As a patient is being taken to a health care clinic that may be miles away, the technology could be recording valuable data that will be available as soon as the patient arrives. Demonstrating that these technologies work well in resource-constrained environments should also enable us to have higher confidence in their ability to scale here in the United States.”

Tucker came to Penn State in 2011 and has been a champion of the Clinical and Translational Science Institute.

“The institute has been a great partner,” he said. “By its very name, it has emphasized translation and has held award grantees accountable for showing how their ideas will be applied. I also really like the emphasis on multidisciplinary research, as many of the world’s problems required multidisciplinary solutions. You have to take into account the human, social, technological, and cultural elements; if they’re not understood or appreciated, a great idea may falter.”