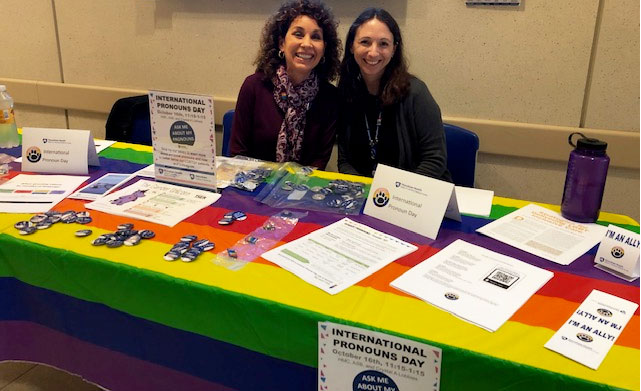 Penn State College of Medicine marked International Pronouns Day by handing out buttons and information on the use of personal pronouns in the lobbies of the Academic Support Building (seen here), at Crystal A Drive, and Penn State Health Milton S. Hershey Medical Center. The event was organized by the campus LGBTQ and Allies Affinity and Resource Group.

Oct. 21, 2019, was International Pronouns Day, and Penn State Health and Penn State College of Medicine’s LGBTQ and Allies Affinity Resource Network Group supported the cause on Oct. 16 by staffing tables in the lobbies of Penn State Health Milton S. Hershey Medical Center, the Academic Support Building and Crystal A Drive for two hours at lunchtime.

A group from the LGBTQ and Allies group is seen with the International Pronouns Day informational table at Penn State Health Milton S. Hershey Medical Center.

International Pronouns Day seeks to make respecting, sharing and educating about personal pronouns commonplace. Referring to people by the pronouns they determine for themselves is basic to human dignity. Being referred to by the wrong pronouns particularly affects transgender and gender-nonconforming people.

Group members staffing the tables shared “Ask Me About My Pronouns” buttons, as well as buttons listing pronouns such as He/Him, She/Her and They/Them. Staffers were able to hold more than 90 meaningful conversations about personal pronouns and provided handouts about why they important and how to respectfully ask for them, as well as links to resources such as The MyPronouns website and tips for including pronouns in email signatures.

One goal of the event was to educate people about gender-inclusive language overall. For instance, instead of walking into a room and saying “Hey, guys,” or showing appreciation by saying “Thank you, sir,” a phrase such as “Hello, everyone” or “Thanks very much; I appreciate it” can help avoid potential misgendering and exclusion of certain groups.

For details on the LGBTQ and Allies Affinity Resource Network Group, email lgbt@pennstatehealth.psu.edu. 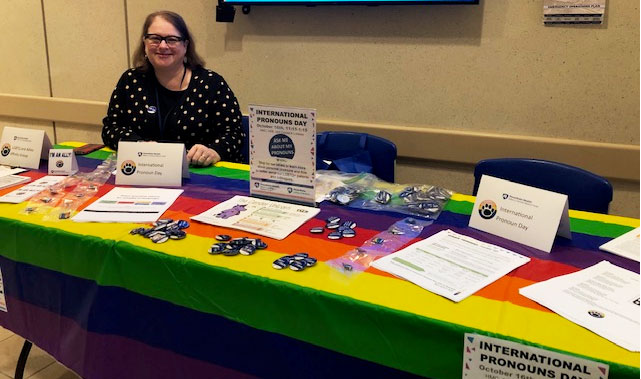 The Academic Support Building lobby was one of three places where LGBTQ and Allies affinity group members shared information for International Pronouns Day. 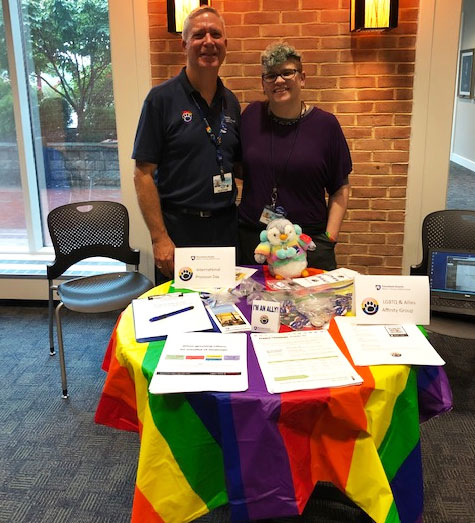 Bill Krenz and Joan Concilio shared information at the Crystal A building for International Pronouns Day.