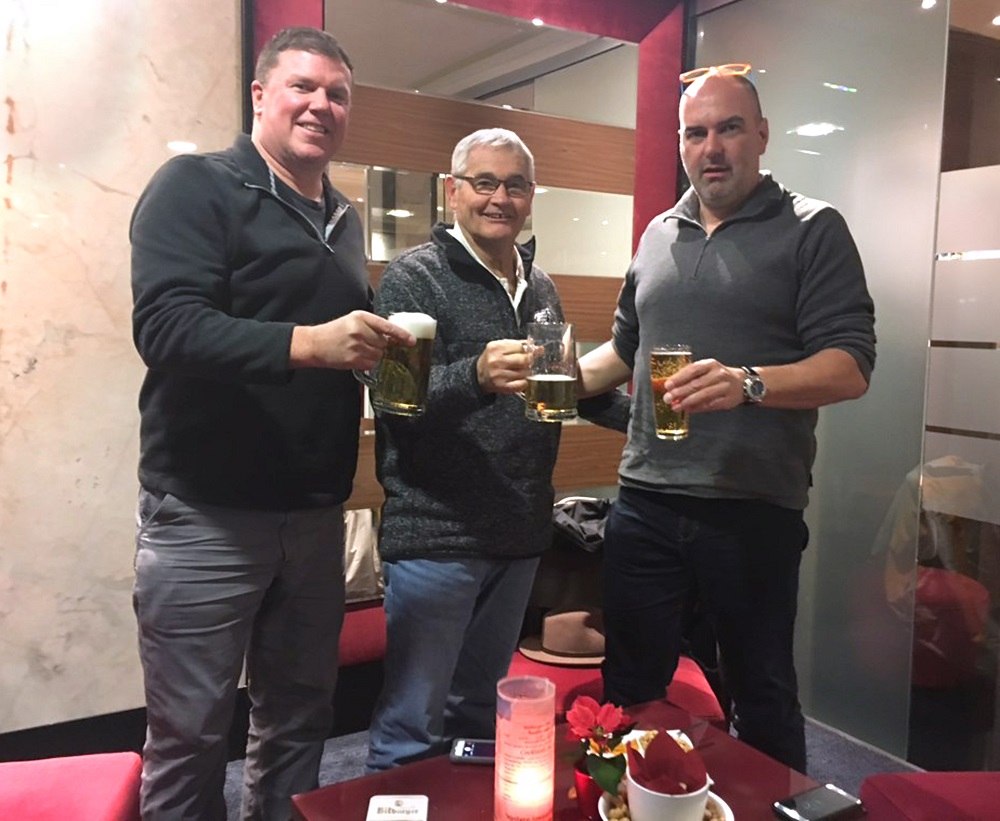 Jim Miller, center, toasts his donor, Stefan Eichert, right, with John Moore, left, the businessman who invited Miller to accompany him on a trip to Germany.

Sometimes the worst things in life can turn up gifts that far outlast the trial. That’s what Jim Miller tells people.

The Red Lion man was diagnosed with myelodysplastic syndrome—a pre-leukemic syndrome—in October 2012 and given the choice of a stem cell transplant or other treatment alternatives that may have resulted in about two more years of life. He chose the transplant.

Although the wait for a match lasted a year—during which time chemotherapy and 27 blood transfusions achieved partial control of the disease—Miller never expected his donor would hail from across the globe.

In Otterberg, Germany, Stefan Eichert signed up to be a bone marrow donor in 2006 because helping other people is something he’s done since he became a volunteer firefighter at age 17.

“It’s only a small step for me,” said the husband and father of two children, who is a machine operator by trade and a volunteer firefighter and EMT. “The bigger problem is for the patient.”

The successful transplantation of stem cells from one man in Germany to another 3,800 miles away took place at Penn State Cancer Institute in September 2013.

Last December, the two men met, and Miller was able to personally thank the hero who saved his life.

“Stefan has saved many lives as an EMT, but he said I’m the first person who ever thanked him—and I flew across the world to do it,” said Miller, who jokes that he isn’t really 73 but only 49—the same age as Eichert, whose DNA he now shares.

“I have never met a person who lives only because of me. In the fire department, we save lives—out of a crashed car or a burning house—but it’s teamwork, all together. Jim lives with my stem cells, my blood,” said Eichert, who didn’t answer Miller’s initial email outreach attempts because “the emotion was just too great.”

The Cancer Institute, which offers the only stem cell transplantation available in central Pennsylvania, has performed more than 2,000 such transplants since 1996 when Dr. Witold Rybka established the program here.

“Within a 200-mile radius, we are the provider of a full range of transplants, including cells obtained from matched sibling donors, matched volunteer unrelated donors, partially matched related and unrelated volunteer donors and cord blood. Recipient patients range in age from infants to the late 70s,” said Rybka, a hematologist who runs the Hematopoietic Cell Therapy Laboratory and Miller’s doctor. 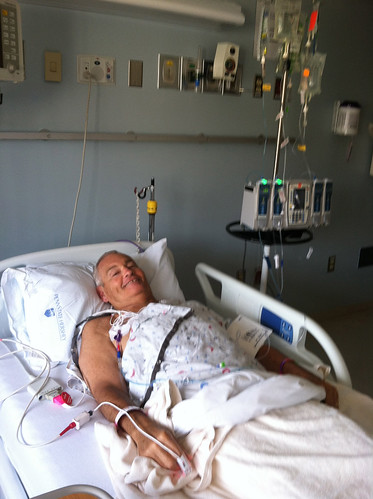 Miller underwent an allogeneic transplant, which uses healthy blood stem cells from someone else. The preferred match comes from a sibling, but this happens only about 25 to 30 percent of the time. In Pennsylvania, it’s not unusual for a good match to come from Germany due to the ethnic makeup of Pennsylvania, Rybka said.

Eichert overcame his fear of needles to receive four consecutive days of injections to stimulate marrow production. On the fifth day, he was connected to a machine that removed the stem cells from his blood. It was a painful process, but Eichert said he focused on the patient whose life he was helping.

The next day, Eichert’s donor cells were infused into Miller intravenously.

Miller developed a lingering case of graft versus host disease, a condition where the donated stem cells view the recipient’s body as foreign and attack it. However, as the donor cells began growing, this process also destroyed the underlying disease. Now, Miller has less than a 2 percent chance of the disease returning, Rybka said.

“We’ve hugely expanded the pool of donors and the safety of performing transplantations, so that there are very few patients who can’t get a donation,” Rybka said. “We’ve overcome so many barriers with things like tissue typing, extensive population searches for donors, controlling graft versus host disease and pushing the barriers of age.”

Sadly, Miller’s biggest cheerleader through his battle, his wife JudyBeth, passed away in September from cancer.

Miller’s chance to go to Germany came about quite suddenly when he went to his granddaughter’s high school basketball game and struck up a conversation with a man sitting nearby who was planning a business trip to Germany. When Miller told him that’s where his donor lived, the man invited Miller to accompany him on his trip.

“I went home and prayed about it,” Miller said. “I had seen God’s intervention in the whole thing already, and I figured there was a reason this happened.”

When Miller finally met Eichert face-to-face, “We hugged each other and cried,” Miller said. “It was like we knew each other right away. He said his English was limited, but we just talked and talked.”

“It’s an incredible feeling to save a life,” said Eichert, who plans to make his first trip to Pennsylvania next year to visit Miller. “Jim won the fight! It’s one of the best things of my life.”

Five years after the successful transplant, Miller said he still marvels at the gift of life and friendship that came from such a hard trial.

“You have to have faith in your God, your doctor and your friends,” he said. “Mine came through in every way.” 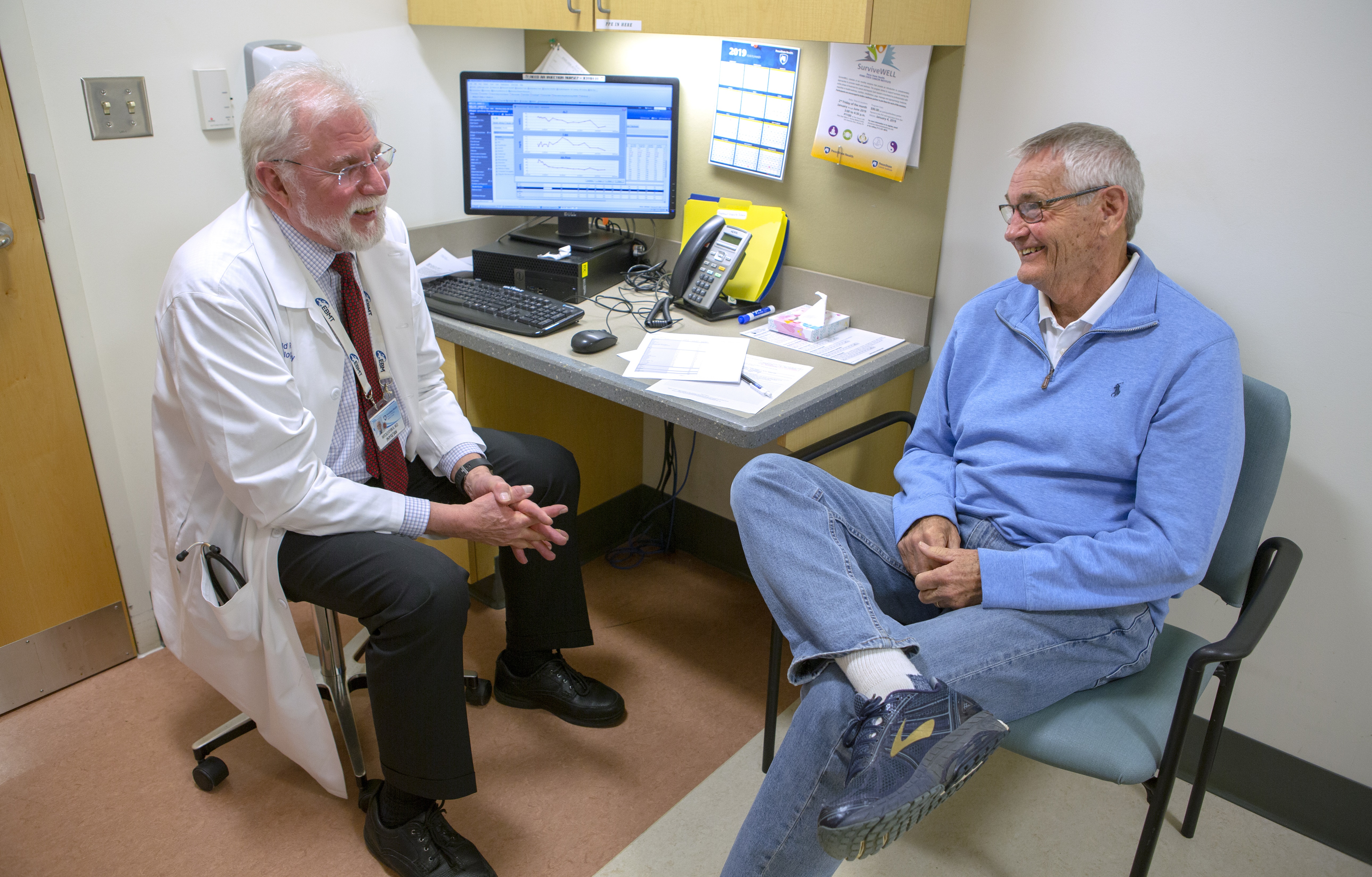