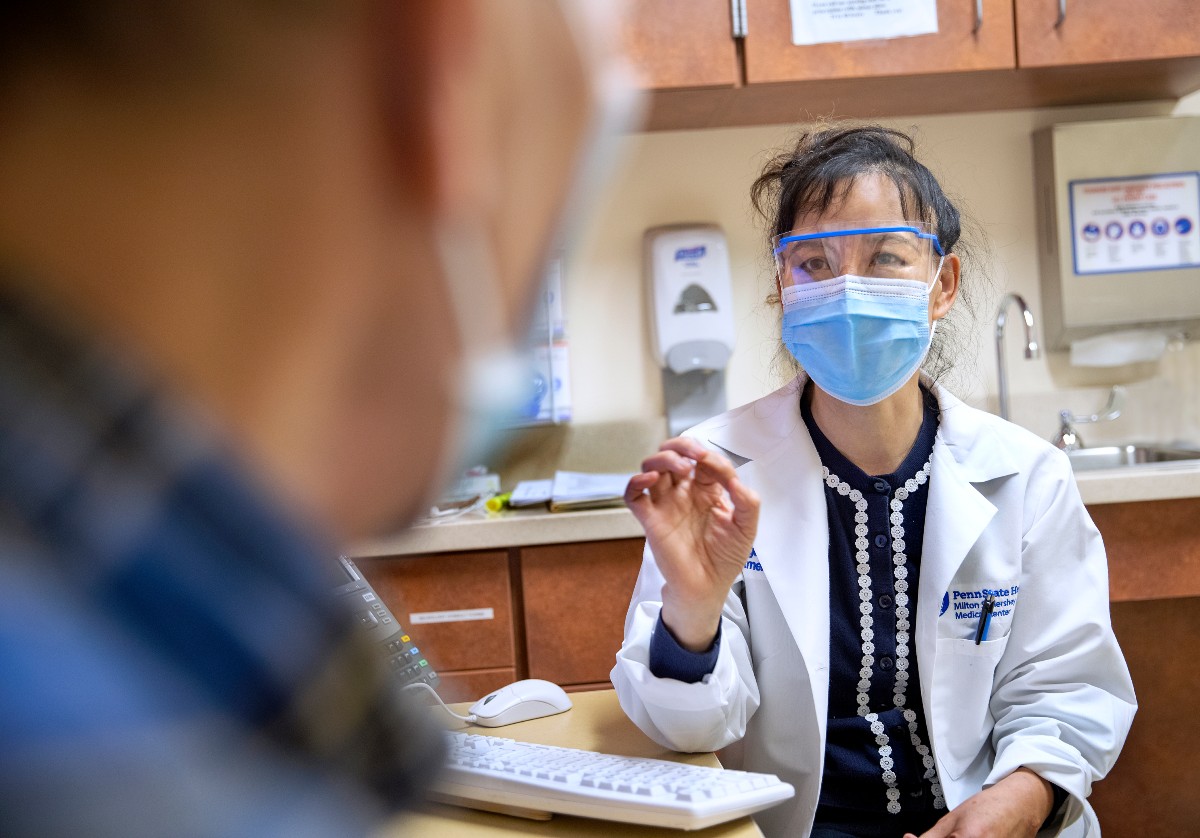 Researchers from Penn State Neuroscience Institute are working to improve treatments for Parkinson’s disease through innovative clinical and translational research. Results from their latest studies suggest that a new type of drug may provide a “second honeymoon” for patients with very advanced disease.

Dr. Xuemei Huang, distinguished professor of neurology, pharmacology and neurosurgery at Penn State College of Medicine, led a first-of-its-kind clinical study for people with advanced Parkinson’s disease. Huang and colleagues evaluated the safety and efficacy of an experimental therapeutic in a small group of patients.

“Few pharmacological interventions exist for people with advanced Parkinson’s disease,” said Huang, director of the Translational Brain Research Center. “We found that these patients and their caregivers are willing to participate in research and that it is feasible to conduct safe and high-quality clinical trials in this group.”

The research team investigated the use of a new drug class that selectively targets a specific set of dopamine receptors in the brain. Parkinson’s disease patients progressively lose motor function when cells that produce dopamine degenerate. For more than 50 years, the standard drug for treatment of Parkinson’s has been levodopa, which is converted to dopamine in the brain. This drug increases life span and improves quality of life in the first years after a patient’s diagnosis – commonly referred to by neurologists as the “honeymoon period.”

Since levodopa loses efficacy as the disease progresses, researchers have looked at alternative drugs called dopamine agonists that directly activate dopamine receptors. Some of these drugs are approved for use in early Parkinson’s but are less effective than levodopa and can lead to side effects like drowsiness and hallucinations, particularly when used in later stages of the disease. Treatments for advanced stage disease remain limited.

“We were the first to show that a D1 agonist could be equally as effective as levodopa in mid-stage Parkinson’s patients,” said Mailman, associate director of the Translational Brain Research Center. “But it has been unclear if D1 agonists would also be effective in very advanced stages of disease.”

Research published in the European Journal of Pharmacology showed that Mailman’s D1 agonist was very effective in a monkey model of advanced Parkinson’s disease. The researchers compared the drug to the standard of care levodopa, as well as to a D2 agonist, both of which were relatively ineffective. While the study showed that a D1 agonist could have potential benefit in advanced Parkinson’s disease, Mailman’s drug had to be injected and had a short duration of action.

A team led by Dr. David Gray, who at the time was a researcher at Pfizer, developed new D1 agonists that can be taken by mouth and whose effects last much longer. Gray is now at Cerevel Therapeutics, which is developing these compounds. Phase III clinical studies are underway to establish the safety and efficacy of an investigational drug called tavapadon from this D1 agonist class in treatment of Parkinson’s disease. Huang, Mailman and their team realized that these new D1 agonists may have specific benefits for very advanced Parkinson’s disease patients ― an idea resulting from the advantages observed in the monkey studies. Researchers have been skeptical if any medication could help advanced Parkinson’s disease patients and have expressed concerns about whether a clinical trial in these patients was even feasible.

Huang, a leading expert in the care and management of advanced Parkinson’s, was aware of the severe disability and hardship caused by the disease and believed that a D1 agonist could be a key to improving quality of life for this group, which currently lacks good treatment options. She and Mailman approached Pfizer and secured support to conduct a small pilot clinical trial with another D1 agonist compound in an effort to validate the preclinical data and see if safety could be established. Huang and her team recruited six patients for a study where the D1 agonist and levodopa were compared in the same patient in a random order. Although safety and tolerability were the main measures of the study, the researchers also collected impressions of clinical change rated by caregivers and clinicians.

One patient who entered the study with baseline clinical issues had symptomatic and serious hypotension after receiving the investigational therapeutic and was discontinued from the study. Although other adverse events were present in some of the other participants, none were serious. The study participants with advanced Parkinson’s disease tolerated the investigational drug, and most caregivers and clinicians ranked the overall impression of the patients’ function and well-being as improved on the D1 agonist compared to levodopa. The results were published in the Journal of Parkinson’s Disease.

To Huang’s knowledge, this was the first drug trial for patients with advanced to end-stage Parkinson’s disease. She said this trial demonstrates that clinical studies can be done in this population and that D1 agonists may have therapeutic potential.

“Further development and testing of D1 agonists may offer advanced Parkinson’s patients a ‘second honeymoon,’” said Huang. “Future studies can evaluate new D1 agonists, and trials can be designed that include more participants, increase treatment duration and have additional measures of safety and efficacy.”

This research described in the European Journal of Pharmacology was supported, in part, by Public Health Service research grants. The research described in the Journal of Parkinson’s Disease was supported by a grant from Pfizer Central Research, who also supplied the test drug and placebo. This study and the team at Penn State was also supported in part by the National Institute of Neurological Disorders and Stroke, Parkinson’s Disease Biomarker Program and Penn State Clinical and Translational Science Institute. The views and opinions expressed above are those of the authors and not the research sponsors.

Dr. Mailman is an inventor of D1 agonist technology, the conflicts-of-interest of which are managed by the Pennsylvania State University College of Medicine. He is the past recipient of research funds and consulting compensation from Pfizer, Inc. Dr. Huang is an inventor of D1 agonist-related technology whose interests were assigned to the University of North Carolina. Dr. Huang has also received nominal transportation and per diem expenses from Acadia, Medtronics, and Cerevel Therapeutics, and research support from Pfizer, Biogen, and Biohaven. Drs. Mailman and Huang have no other conflicting interests. The opinions in this article are those of the authors alone and do not reflect those of the university or any other party.