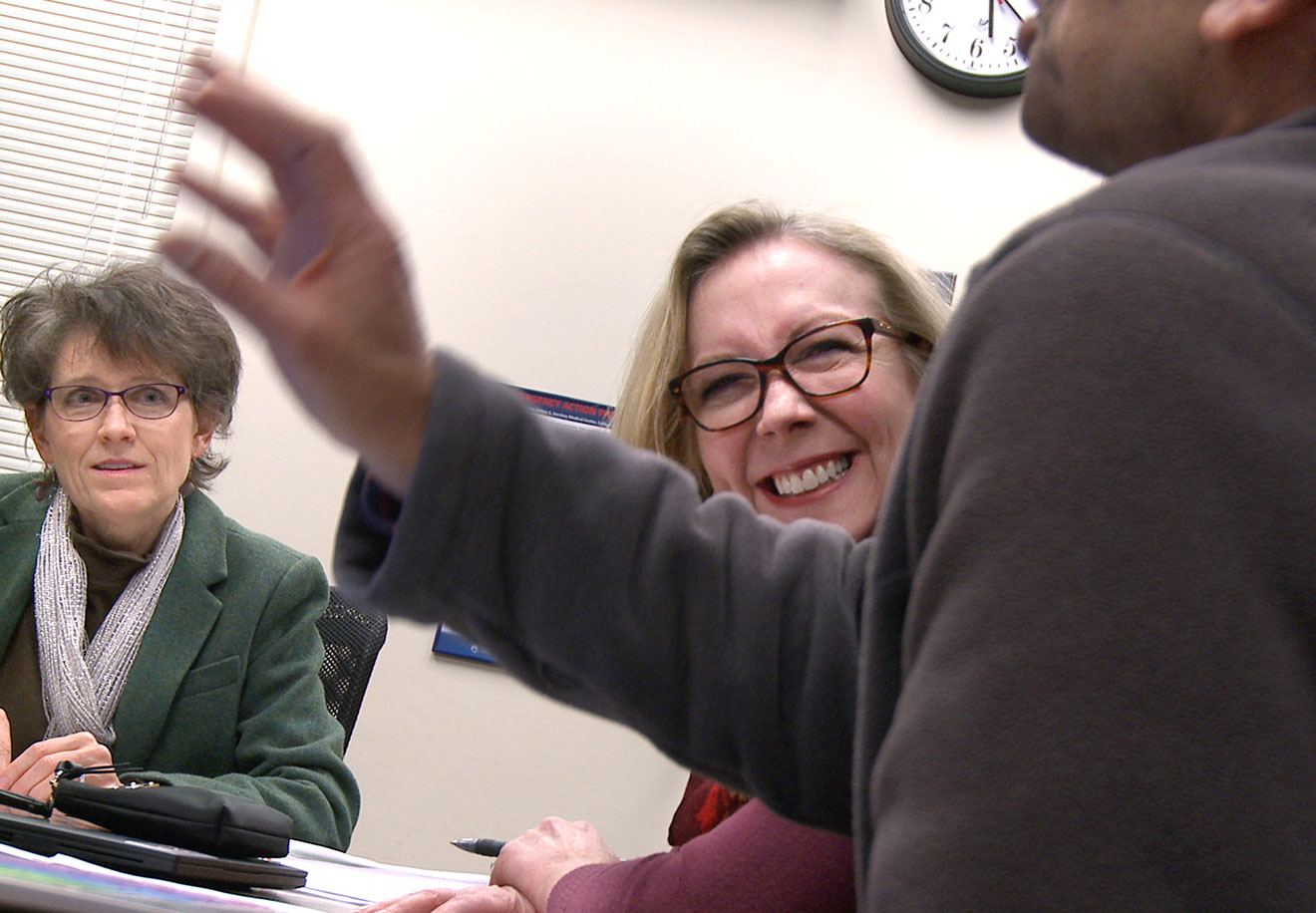 After a long day seeing patients at the hospital, Dr. Ian Ross unwinds by letting his thoughts and feelings run wild across a page – releasing all the stress of the day into a safe space.

“It’s almost become a therapeutic process for me – it helps me to process how I feel about things,” said Ross, an internal medicine hospitalist with Penn State Health Milton S. Hershey Medical Center. “Doing patient care 100% of the time can make you feel drained. Writing absolutely revitalizes me.”

Before medical school, Ross’s hobbies included music, sketching and acting – outlets for his creative energy that he really misses as a doctor. When he arrived at the Milton S. Hershey Medical Center last summer, he heard about Penn State Health Physician Writers Group and was immediately intrigued.

Kimberly Myers, who holds a doctorate in literature and is a professor of humanities and medicine at Penn State College of Medicine, began the group as a way for doctors to pursue creative writing for publication in scholarly journals.

At twice-monthly meetings, Myers discusses the literary elements of different genres – anything from poetry to personal reflection essays – and then participants write an original work and send it to their colleagues for review before the group meets again for critiques. They revise their work and, at the end of five meetings, have a portfolio of pieces to submit for publication. 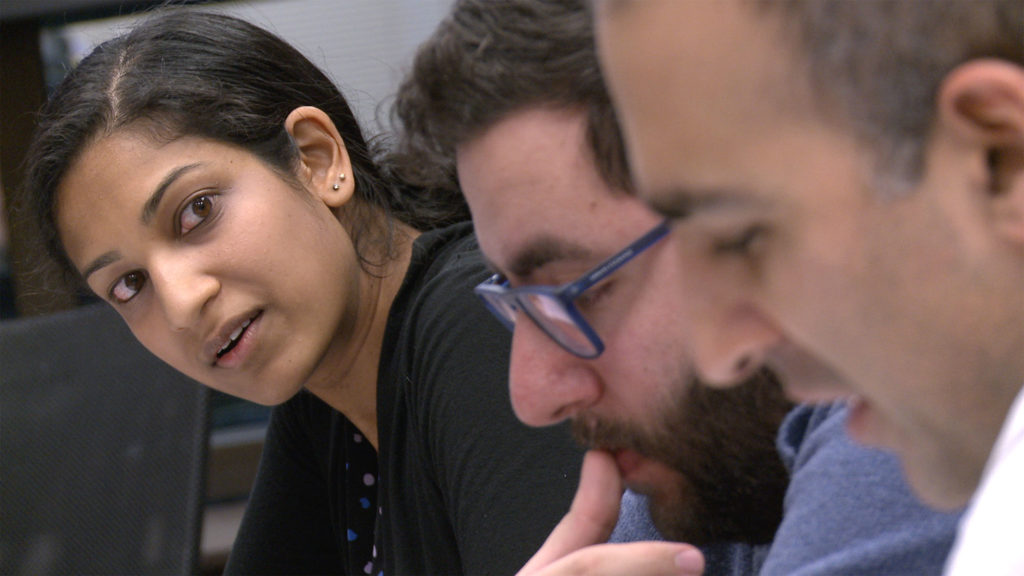 More than two dozen doctors have participated in the groups and published more than 40 pieces collectively in impressive places such as Journal of the American Medicine Association, New England Journal of Medicine, Annals of Internal Medicine, Journal of Clinical Oncology and other general and specialty medical publications.

“It’s very gratifying to see these doctors, who have accomplished phenomenal things in the medical field, become excited about publishing creative work on their experiences with patients and their own inner lives,” Myers said. “They find a sense of fulfillment and accomplishment in a domain they never expected.”

Being part of the group allows doctors to tap into another dimension of their personality – the human side – that can benefit not only themselves but their patients, said Dr. Joseph Gascho, cardiologist at Penn State Heart and Vascular Institute, prolific poet and member of the first Physician Writers Group.

“We can sometimes be too clinical, too scientific, and part of that is self-preservation, but the humanities – learning to listen and take in – is so important and helps you to understand people,” he said. “There is so much more to medicine than science – the older I get, the more I realize that.”

Gascho, who has had some 50 poems and prose pieces published in medical journals and whose first book of original poetry came out in 2017, said poetry gets at the ambiguities of medicine and helps him process on paper the gray areas for which he never finds answers in the exam room.

“It’s a way that I wrestle with things,” he said. “I like the terseness of expression with poetry, the way you can distill down the essence of things to an ‘aha’ way of thinking.”

The New Jersey-based Arnold P. Gold Foundation, which champions the human connection in health care, collaborated with the Physician Writers Group to produce a webinar. Penn State College of Medicine is a member of the Gold Partners Council, a group of medical schools and health systems that are leaders of humanism in health care and actively support the Gold Foundation’s mission. “The Gold Foundation is interested in highlighting innovative, impressive examples of engagement in humanistic practices by members of the Gold Partners Council, and Gold staff identified the Penn State Physician Writers Group as a perfect example,” said Pia Pyne Miller, senior director of strategy and business development for the Gold Foundation.

The foundation plans to distribute the webinar through its website, social media and the Gold Partners Council network, making it a resource for other humanistic institutions.

In the webinar, Myers gives an overview of the group, and 13 physicians share their writing.

Ross, who joined the Physician Writers Group last year, wrote about something he knew well – the loss of his creative side as he concentrated on becoming a physician. The words came easily, but when it came time to share it, courage did not.

“It was deeply, deeply personal – and I didn’t know if it was any good either,” Ross said with a chuckle. “Kimberly was so supportive and gave me great feedback on ways to improve.” It was that piece Ross read for the webinar audience.

Doctors who have participated in Physician Writers Group cohorts, many of whom continue to share their works with Myers and each other, credit her for inspiring them and ultimately making them better doctors. 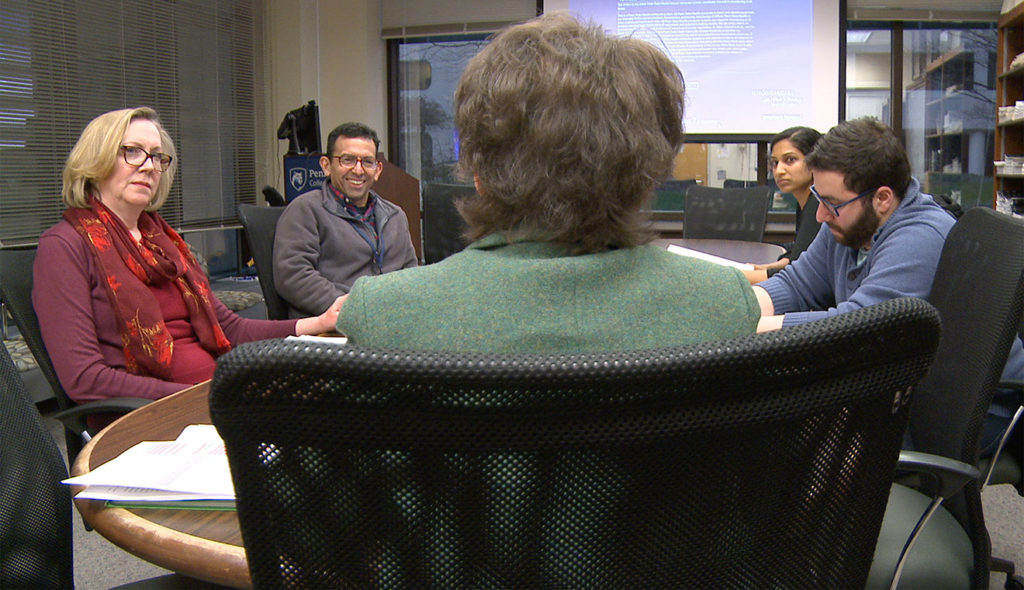 Dr. Thomas Ma, chair of the College of Medicine’s Department of Medicine, believes in the therapeutic value of creativity so much that his department funds part of Myers’ time to facilitate the group.

“One of the top issues physicians face is burnout. It’s never been higher, with 60 percent of physicians nationwide exhibiting symptoms such as not wanting to go to work, depression, lack of engagement, substance abuse and ultimately leaving the profession early,” Ma said. Penn State Health’s internal research shows that its physicians align with these national trends. Ma’s goal is to cut the rate here by half, he said.

The Physician Writers Group allows reflective thinking, which has a positive impact on emotions and well-being, Ma said.

“I also think it helps them become more patient-centric and see a bigger picture that they may have forgotten because they are so wrapped up in day-to-day demands,” he said. “Any opportunity for me to help physicians use their creativity is a huge positive for our department, the college and the individual.”

The Joy of Medicine

This poem, by Dr. Joseph Gascho, was named Poem of the Year in 2014 by the Annals of Internal Medicine.

but most of all
it is about the long haul trucker
who runs to Reno
twice a week
who doesn’t know
he should be dead
but you do.