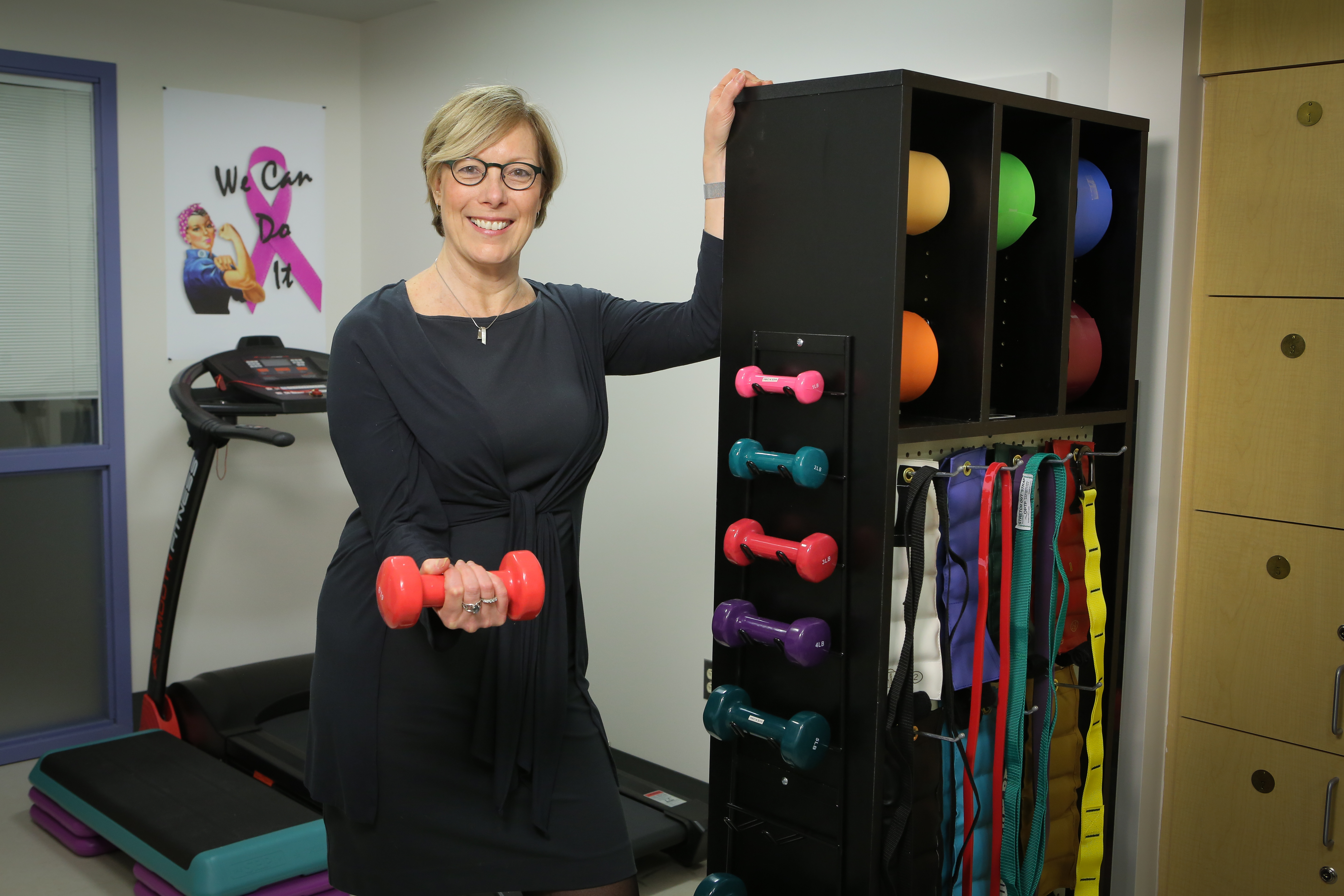 Kathryn "Katie" Schmitz, professor of public health sciences and physical medicine and rehabilitation at Penn State College of Medicine, is working to promote the field of exercise oncology.

In a second-floor, 300-square-foot chemotherapy infusion suite in Penn State Cancer Institute are some dumbbells, some stretchy bands, two treadmills, a recumbent bike, a weight bench, some physical therapy tools and a raised mat. It’s not much and it’s not very big, but for researcher Kathryn Schmitz, PhD, it’s what she wanted.

“What I asked for and got in coming to Penn State Cancer Institute was the exercise medicine unit in an oncology clinical setting,” Schmitz said. She needed it for her work.

With the help of an experienced master trainer, this is where she and her team plan to make exercise part of the standard of care for cancer patients as they research the role of nutrition and exercise in cancer treatment and recovery. She has several clinical research studies underway or in development.

While she has been a professional dancer and a personal trainer, Schmitz is now a professor of epidemiology in the Department of Public Health Sciences at Penn State College of Medicine and the associate director of population sciences at the Cancer Institute. She worked in executive fitness on Wall Street for about six years and managed the Solomon Brothers Fitness Center at 7 World Trade.

“I had this beautiful office at the top of this amazing building and I was paid handsomely, but I had a terminal case of boredom,” she said. “I decided I wanted more.”

So she returned to school to earn her master’s and doctorate degrees, where she developed a love for research that led to a postdoctoral research fellowship and a master’s in public health.

While her research initially focused on obesity and heart disease, she now finds herself in a growing field studying the relationship between exercise and cancer.

“It’s been really exciting,” Schmitz said. “It’s rare that you get an opportunity to work in an area of science where you can do a study that changes clinical practice. By the end of my career, I want us to be using exercise in oncology the same way that we already do for heart disease.”

While it’s common knowledge that exercise is good for the heart, Schmitz believes it’s time to teach people that exercise is also important in prevention of, as part of treatment and during recovery from cancer. That’s currently not always happening.

“Right now, we’re still in a place where in many community-based oncology settings, oncologists are telling people not to exercise once they’ve had a diagnosis of cancer,” she said.

At one time, patients with back injuries were told to rest, people who had heart attacks were bedridden and mothers would stay in a hospital bed for a week after giving birth. Eventually, each specialty realized that the best treatment in all those cases was to get up and move.

“Unfortunately for cancer patients, that news has yet to reach the clinic,” she said.

Schmitz has been one of a vanguard of researchers in the area of exercise oncology. Evidence is mounting to show that exercise is not only safe during cancer and after treatment therapies like chemotherapy and radiation, it actually is likely to reduce the persistent, adverse effects.

With the increase in survivors has come a need to address treatment side effects: fatigue, pain, nerve damage, memory and concentration issues, heart issues, incontinence, erectile dysfunction, anger, anxiety and depression are common during or after cancer treatment.

“Exercise is being looked at as a potential addition after primary therapy to help prevent secondary tumor formation, and potentially may reduce the likelihood of mortality or recurrence of hormonally related cancers like breast and colon,” she said.

Exercise may also be useful for helping people to maintain employment and function, and to get back to feeling more like themselves.

Working within the Cancer Institute, her team will work with patients, nurses and doctors and make changes as necessary to ensure that participation in one of her exercise studies does not interfere with chemotherapy.

Patients undergoing chemotherapy may be asked if they are interested in joining a study and participation is completely voluntary.

While publishing in medical journals for peers is certainly an objective for any researcher, Schmitz’s ultimate goal is to make a difference for cancer patients.

“If you have a heart attack, there is a very well-defined protocol for your cardiac rehabilitation,” she said. “Why is it we don’t have standardized rehabilitation after cancer?”

March is National Nutrition Month: Here's how you can reach your nutrition goals

Tips for effective goal-setting, at New Year's or any time

How exercise improves quality of life for one cancer patient

How patients with liver disease can benefit from exercise