Bacteria/virus combo may cause neonatal brain infections in Uganda 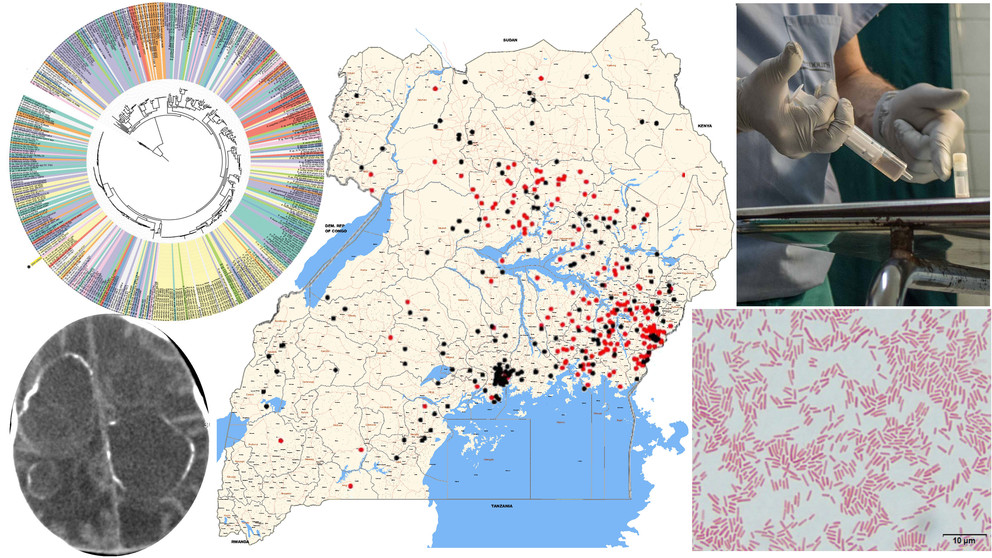 An international team led by Penn State investigated the origin of the severe brain infections afflicting thousands of Ugandan infants in the neonatal period, and often resulting in hydrocephalus in the survivors. Fluid from the brain taken at surgery led to the recovery of a novel strain of a highly virulent bacteria, shown on the tree of life of related organisms. These infection cases, shown as red dots on the map, are concentrated within a region in Eastern Uganda characterized by wetlands and swamps on the north and south banks of Lake Kyoga that the Nile river flows into and out of. This map is adapted and based on OCHA/ReliefWeb (UN Office for the Coordination of Humanitarian Affairs) and is used as permitted by the agency. The composite image was provided by the Schiff lab.

Penn State College of Medicine researchers have discovered a new bacteria that, when paired with a common virus, may be the cause of infection-induced hydrocephalus in Uganda. Dr. Steven J. Schiff, Brush Chair Professor of Engineering and professor of engineering science and mechanics, neurosurgery and physics led an international team of researchers who investigated the cause of a neonatal brain infection in Uganda.

“Thirteen years ago, while visiting Uganda and seeing a stream of kids with hydrocephalus after infection I asked the doctors, ‘What is the biggest problem you have that you can’t solve?” Schiff said. “‘Why don’t you figure out what makes these kids sick?’ was the reply.”

At the time, doctors at CURE Children’s Hospital of Uganda had seen more than a thousand infants with infection-caused hydrocephalus, or buildup of fluid in the brain cavities. They have now seen more than 8,000 children in this one, small Ugandan hospital. According to the researchers, if left untreated in children less than two years old, the progressive increase in head size will lead to further brain damage, resulting in the majority of these children dying, and those that survive are left with severe cognitive and physical disability.

A five-year study in Uganda, supported by the U.S. National Institutes of Health, used advanced genomic techniques to uncover the major bacterial and viral underpinnings of these infections. Schiff and colleagues analyzed blood and cerebrospinal fluid drawn from 100 cases of post-infectious hydrocephalus and control patients without infection in Uganda.

They found a weird bacteria in the samples. It was a previously unidentified strain of Paenibacillus thiaminolyticus, now named Mbale after the city where the CURE Children’s Hospital is located. According to Schiff, the initial link between hydrocephalus and Paenibacillus was made through high-throughput sequencing and PCR analyses at the Center for Infection and Immunity in the Mailman School of Public Health at Columbia University, a renowned center led by W. Ian Lipkin.

“You build a field of dreams – in this case, a platform for pathogen discovery – and wait for the right partner and the right project,” said Lipkin, the John Snow Professor of Epidemiology and director of the Center for Infection and Immunity, Mailman School of Public Health and professor of pathology and neurology at Columbia University. “Steven Schiff is a remarkable investigator and this is such a project. It stands out for impact among hundreds we’ve done over a period of more than 30 years. Our team is delighted to have had an opportunity to help implicate an agent and contribute to control of this devastating disorder.”

After further investigation, Schiff and colleagues found, cytomegalovirus in the cerebrospinal fluid of the infection-caused hydrocephalic infants, but not in that of other hydrocephalus patients. While they believe they have found the source of the infections that cause the high prevalence of hydrocephalus, they do not know where the babies encounter the new bacteria. According to Schiff, the bacteria may be soil- or water-borne and more work is needed to find the bacterial source.

James Broach, distinguished professor and chair of the Department of Biochemistry and Molecular Biology, director of the Penn State Institute for Personalized Medicine and Penn State Cancer Institute researcher, also contributed to this research, which was published in Science Translational Medicine.

Read more about the results of Schiff’s latest study in this Penn State News article.

College of Medicine animal program accredited for responsible use, treatment of animals