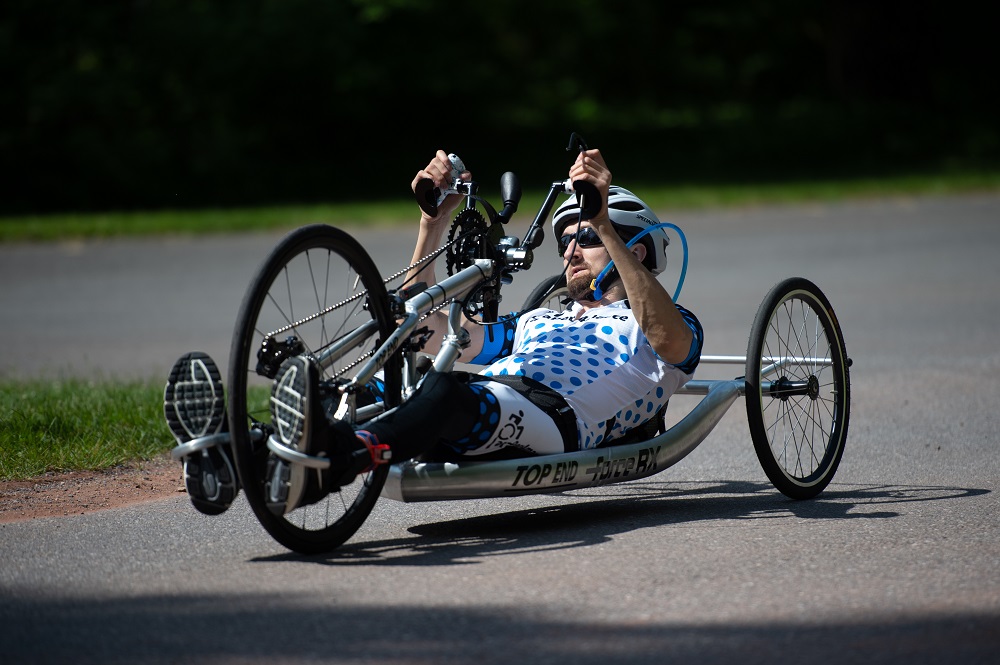 Cody Wills finishes the 16-mile bike ride section for his relay team during the “Got the Nerve? Triathlon.”

To Wills, life is one long and winding race track, complete with steep hills, hairpin turns and times to beat. So when he found out eight years ago at the age of 20 he’d spend the rest of his life in a wheelchair, Wills shrugged.

After all, practically since he could crawl, Wills has lived for wheels.

So it’s no shock to find him at dawn on May 18 leading his Top End Force RX hand cycle through a crowd of friends and fans at the 16th annual Got the Nerve? Triathlon, flashing a toothy, crescent-moon grin. Just about everyone knows him.

The Mount Gretna triathlon is one of two Penn State Health-sponsored events on this day geared to support adaptive athletes like Wills. An hour or so after his 16-mile hand-cycle race morning, Wills plans to load up into his Chevy Avalanche and drive to Middletown, where he’s expected at RecFest. On the campus of Penn State Harrisburg, vendors demonstrate sports like wheelchair rugby, basketball and diving.

Wills will be a featured attraction. He’ll ride a motorcycle for The Bike Experience Foundation and throw punches and flex for ParaPer4mance, a fitness company he promotes. 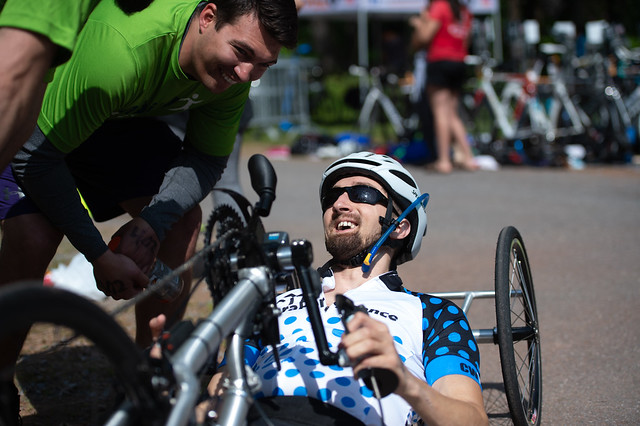 The showmanship hasn’t changed since his 2011 accident. At home, the Wills still have framed photos of their son as a youngster popping a wheelie on a motorcycle in the front yard. He continues to ride ATVs for fun but fulfills his competitive side by traveling the country looking for tracks on which to race a stopwatch, regardless of the broken neck that took away his legs.

The biggest difference: these days, Wills is taking passengers along for the ride.

One is Alan Fisher, who emerges from a pack of riders in Mount Gretna readying equipment. The two shake hands. About two years ago, Fisher, who’d long been a competitive cyclist, wiped out and paralyzed his legs.

One day, during his stay at Penn State Health Milton S. Hershey Medical Center, a guy he never met before wheeled into his hospital room and flashed a smile. It was Wills, of course. You’re a cyclist? Wills asked. Let me show you. He and Fisher pored over pictures of adaptive sports equipment. That day, Fisher realized he wouldn’t be off the road for long. Six months later, he was riding his own hand cycle.

As they unpack gear and snacks, the two talk about their bikes. Wills’ Top End Force RX is three wheels joined at the center by a reclining seat.

Hand cycling wasn’t serious business for Wills until he met a group from Ability Prosthetics and Orthotics, a Mechanicsburg-based company, at another Penn State Health event. A group helping adaptive skiers – another Wills activity ― told him they participated in the Got the Nerve? Triathlon every year.

Wills asked the Ability Prosthetics and Orthotics group if they’d like to compete as a relay team – each racer taking a slot of the swimming, biking and running event. Wills would handle the 16-mile bike race. After they agreed, Wills began riding his bike every other day to train.

At the staging area, Wills strips off his blue hoody and sweats, revealing a blue polka-dotted uniform. On the arm in black numerals is 77, which is the number under which he used to race in the motocross circuit.

For his mother, Judy Wills, Cody’s time on the motocross circuit seem practically worry-free. Even though he broke nearly a dozen bones over the years, he always bounced back.

Then came Feb. 19, 2011. Wills was racing an ATV at the Pennsylvania Farm Show Complex. He flipped the vehicle and landed on his head. “Right away,” Wills said, “I knew what happened.”

Wills told paramedics he couldn’t feel his legs. They rerouted to a trauma unit at the Milton S. Hershey Medical Center.

He’d crushed his C6 vertebrae and sustained an incomplete spinal cord injury. Doctors put him into a medically induced coma and forced his body into hypothermia to help minimize the damage. 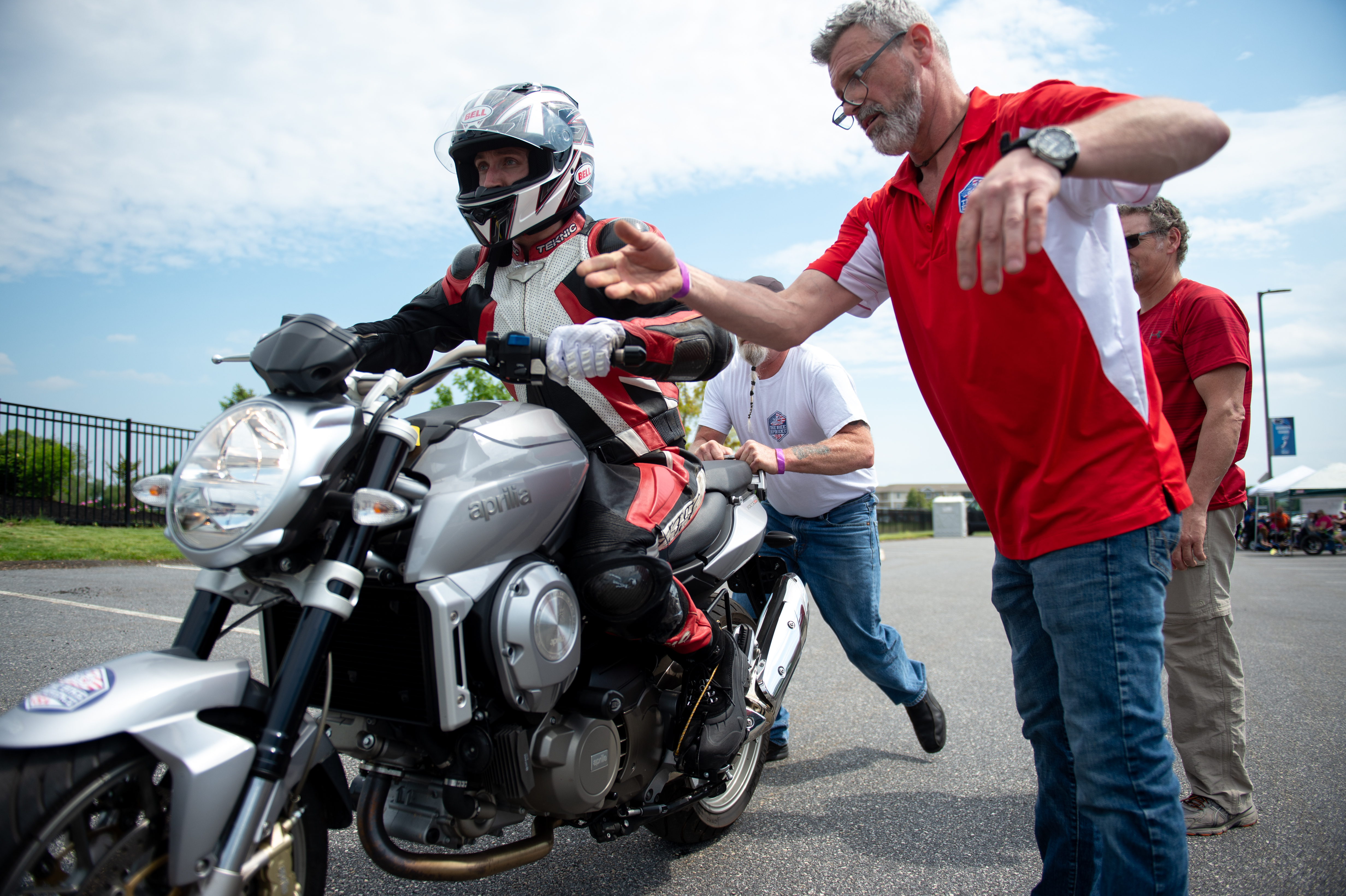 “Cody got a really good surgeon,” Judy Wills said. “All the nurses treated him like he was their son. And then when we went to the rehab, it was actually even better.”

In the weeks and months that followed, Judy Wills felt a deeper worry for her son than she’d known before. When he returned home after weeks in the hospital, the first thing Wills asked to do was sit on his ATV. “It was the same one he wrecked,” Judy Wills said. “So I hated it.”

Then Wills began a competition with himself. He’d lost some control over his fingers, so he pieced together puzzles and played with remote control cars. When the toy cars broke down, he labored to repair them. Slowly, his fingers began to move again.

He began to time himself on simple tasks. Getting in and out of his car or into the shower. Wills put the stopwatch to himself and tried to beat his time.

The determination wasn’t new, Judy Wills said. It was just Cody. “He plans very carefully,” she said. “That’s why we were so surprised when he got hurt. Because he’s always so careful.”

Getting back into his Pontiac GTO was a priority. He installed a hand control, freeing himself from the need for foot pedals.

But he wasn’t climbing back to his old life alone. One of Wills’ friends had suffered similar injury. You should be driving, he told the friend, and helped him install a spare handset Wills had bought for his own car. Soon the friend was driving.

He will participate in 10 hand cycling races this year across the U.S.

The Mount Gretna run is the hardest so far. The hills are steep. During last year’s triathlon, it rained, and Wills finished the course in an hour and 36 minutes. This year, he’s aiming to shave off a few minutes

Dominic Baronio swims the 750-meter opening leg of the triathlon and trots to Wills’ side as he waits on his bike. Baronio attaches a transponder to Wills’ ankle. A moment later, he disappears around the first bend, face pointed skyward, ropelike muscles flexing beneath the blue polka dots.

After an hour or so, he reappears and crosses the finish line.

His time: 20 minutes faster than the year before.

One hour later, Wills pulls onto Penn State Harrisburg’s campus for RecFest and wheels across walkways lined with stands offering everything from fishing poles to rugby-equipped wheelchairs. So many people stop to hug him or shake his hand, it takes Wills a long time to cross the campus.

One fan is 6-year-old Jase Lokey, who moments before had climbed into a pint-sized wheel chair and joined in a game of basketball. When Lokey saw Wills, he wheeled after him and watched his every move. Jase, the grandson of Nancy Lokey, nurse coordinator with the Department of Physical Medicine and Rehabilitation, doesn’t have to use a wheelchair. But ever since a couple years ago when Wills gave the boy a Matchbox car shaped like a wheel chair, he’s been obsessed.

“He just loves everything about Cody,” says his mother, Kristin Lokey.

The Department of Physical Medicine and Rehabilitation community is equally inspired and enhanced by Wills, said the boy’s grandmother.

“He has risen to an extraordinary level of positive, active living and is an absolute role model in the rehab community and among those with similar disabilities,” Nancy Lokey said. “He is a perfect example of why we work with community organizations to increase the availability and accessibility of sports and recreation to everyone. It’s why we bring events like this to the communities we serve: so others can see it’s possible to continue to live abundantly regardless of personal challenges or what others may see as boundaries or limitations. Such an incredible person he is, and Penn state Health is honored to have been part of his recovery.”

After he pulls on leather pants, a jacket and a helmet, four men pick Wills up and seat him astride a motorcycle. Wills is off, looping through the parking lot as adaptive sports experts tell Wills’ adoring fans that a broken neck doesn’t necessarily mean an exit from hog heaven.

Judy Wills stands on the curb with other members of the family, watching. She worries more than she used to, but she’s come to understand the importance of her son’s wheels obsession.

“A lot of people with spinal cord injuries don’t know what they can do, because nobody tells them,” Judy Wills said. “Cody tells them.” 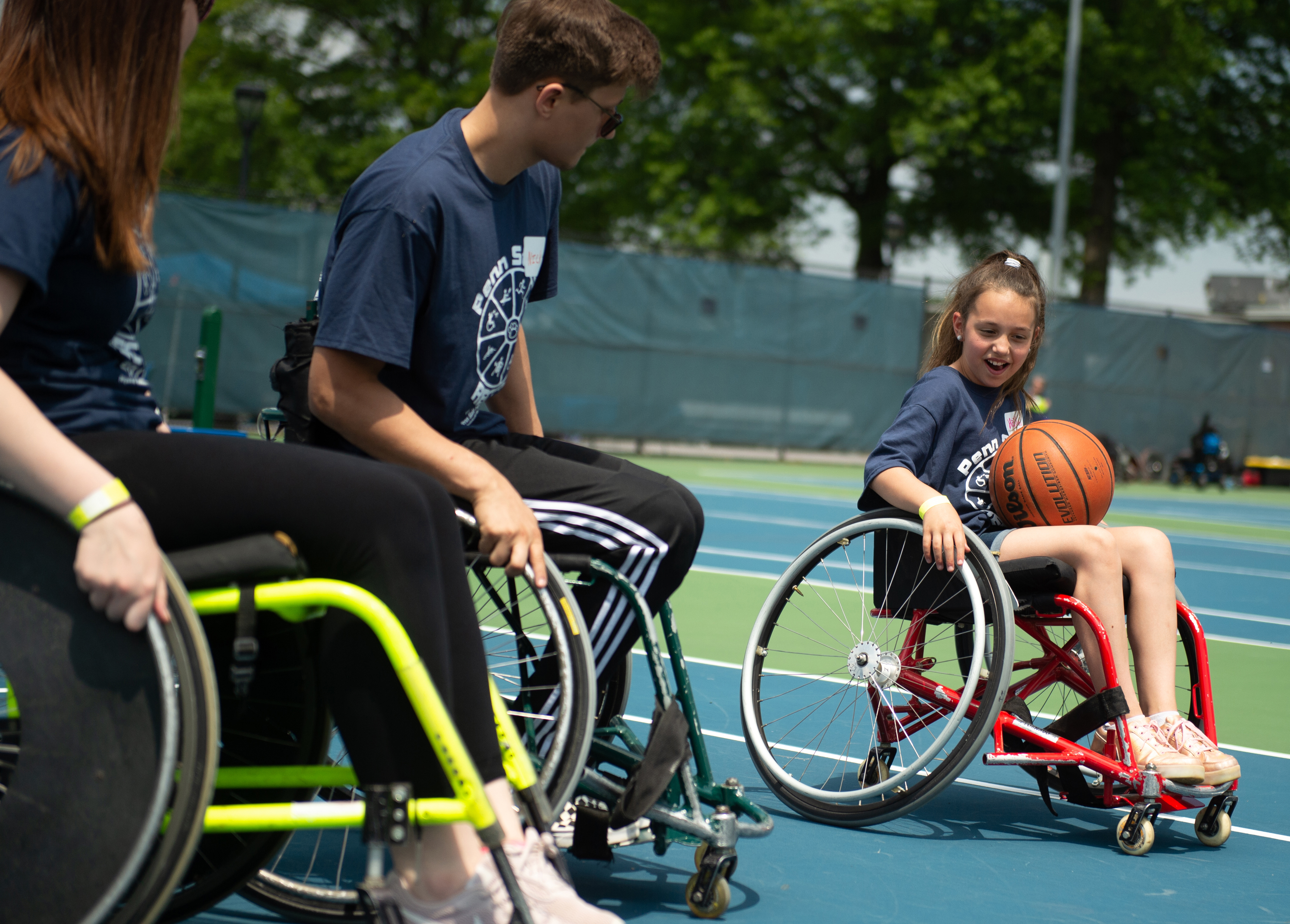 Hailey Kuhn, 11, of Lebanon, takes it to the basket while trying out wheelchair basketball during RecFest.