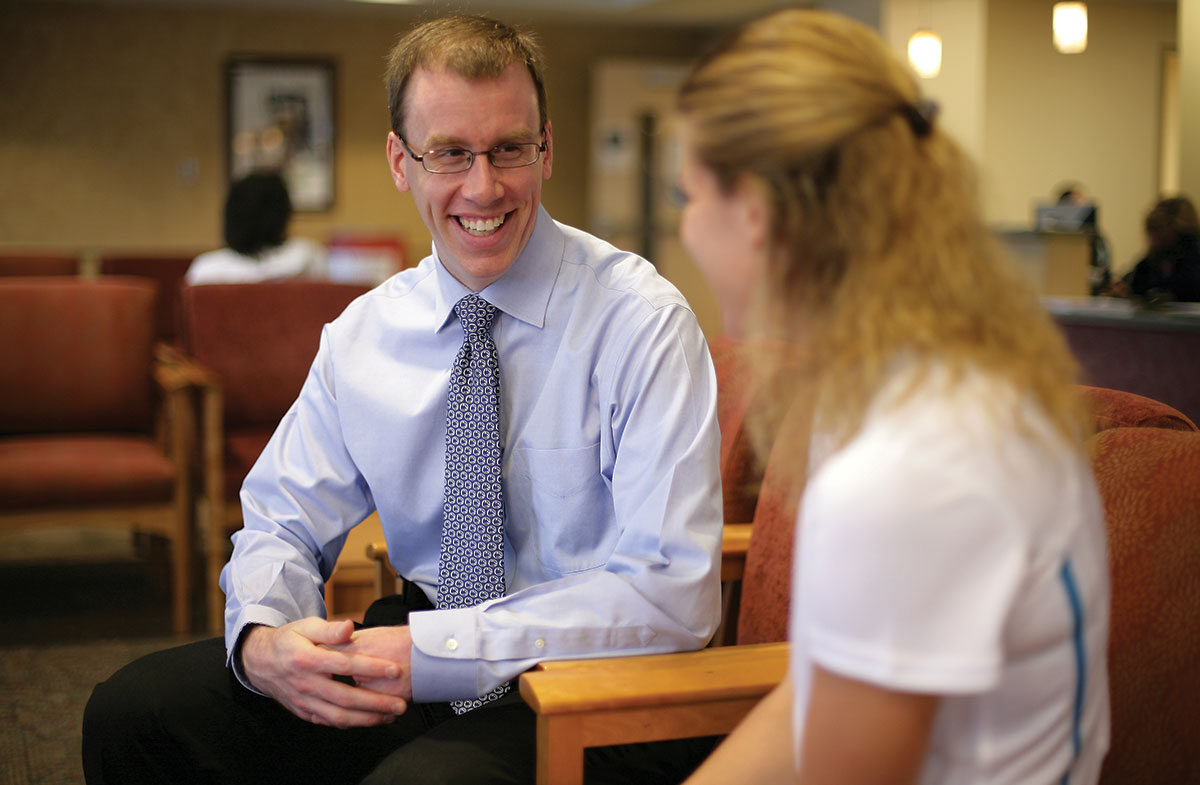 Matt Silvis, MD, left, is a professor in the departments of Family and Community Medicine and Orthopaedics and Rehabilitation at Penn State Health Milton S. Hershey Medical Center.

The Summer 2017 edition of Sports Medicine for the Primary Care provider was recently published. Articles in this edition include “Selective Functional Movement Assessment (SFMA),” “Diving Medicine” and “Research in Brief,” a look at two recently presented studies.

A printable version of this newsletter is available here.

All articles also appear below.

I hope this finds you well and enjoying the summer months! Here you will find the latest edition of our Primary Care Sports Medicine Newsletter, a biannual newsletter of seasonal sports topics. We hope you find the information useful and appreciate any feedback you have to enhance our efforts.

Movement. What does that mean; what is “movement?” Merriam-Webster’s definition of movement is as follows: change of place, position or posture. But it’s more intimate than that.

It is the way the human species lives, survives and, hopefully, thrives. Unfortunately, in this modern world of reduced activity, movement does not occur as it used to and often results in increased pain, further reducing the want or desire to function. So, how do we encourage and engage our patients in more activity, more movement? How do we evaluate what type of movement is best and safest? We need an intuitive schema that classifies full-body movement.

Put forth by Gray Cook and colleagues, the SFMA builds upon the mechanical diagnosis evaluation of Robin McKenzie, the motor control concepts of Shirley Sahrmann, the postural considerations of Vladim Janda, with fundamental influences from neuro-developmental sequencing philosophies. Incorporate the best techniques from other biomechanical constructs, sprinkle in some professional expertise and you have an effective critique of movement.

The principle is centered on the concept of regional interdependence in that each individual part, while important, needs to be evaluated as a construct of the whole. Human movement is the sum of all its parts. But, before narrowing the focus, see the big picture. Understanding the interplay of all components is necessary for correcting disrupted patterns, but also for restoring proper post-treatment function. Once asymmetries, faults, deficits or pain patterns are identified, then methodically breaking down each component leads the health care professional to the ultimate cause of the symptoms.

The SFMA is built upon top-tier movements that give the clinician an overall picture of an individual’s posture and positional transitions. Actions are either labeled “functional” or “dysfunctional” and with or without an associated pain state. Once the top tier has been labeled, the clinician then uses those findings to direct a more organized investigation into the patient’s implicated localized and regional tissues. Systematic scrutiny leads the clinician to determine not only the cause of the patient’s dysfunction, but also clearly directs his or her treatment toward a condition that may be presenting as a tissue restriction or a motor control deficit.

It is important that as we are encouraged to “move” to maintain both physiological and psychological well-being, that we do so in the healthiest fashion possible. However, if problems arise, it is comforting to know that as we have reproducible guidelines for our health –
like blood pressure – we are beginning to utilize similar standards for the musculoskeletal system: selective functional movement assessment.

Whether it is in the frigid months of winter or the sweltering heat of summer, many patients enjoy escaping life on land to visit the world underwater. Those who have explored this environment know the awe and wonder of submerging into an exotic world to see beautiful fish, coral reefs and even, sometimes, sunken shipwrecks.

For divers, the aquatic realm has unique medical risks that are not often contemplated. Of course, “the bends” gets its share of notoriety, but more common ailments offer similar hazards as on shore, such as cardiovascular disease, asthma, diabetes and musculoskeletal injuries. In keeping with other athletic endeavors, cardiac death is the number one killer in diving, far outranking shark attacks and “the bends.”

As a diver descends, the body’s tissues absorb more inert gas; as the diver ascends, the excess gas must be released through a decompression process. If a diver ascends too quickly to allow for adequate off-gassing, the risk of symptoms increases for the malady of decompression sickness (DCS). Depending on the type of tissue, DCS can cause joint pain, however, if nerves are involved, the symptoms are more severe –
neurologic DCS. Divers are typically trained to monitor the time spent at depth, as well as the rate of ascent to mitigate these risks. Only 1 to 2 percent of all diving injuries are attributable to DCS, otherwise known as “the bends.”

Scuba diving is a wonderful activity capable of being enjoyed by most individuals. Unfortunately, there are some medical diagnoses for which the risk of being submerged is too great to justify diving. Conditions such as seizure disorders, bullous lung disease, Meniere’s disease or recent joint replacement, to name a few, preclude participation.

If you have patients with questions about diving or you are unsure whether your patient is a suitable diving candidate, I’m happy to discuss or evaluate divers and diving candidates of all levels. See how to contact the Sports Medicine team at Penn State Health here.

Introduction: Hip arthroscopy has seen dramatic growth over the past several years. As technology improves, indications continue to evolve. Our purpose was to evaluate the most recent trends in various arthroscopic hip procedures using a national database significantly larger than those previously utilized and which obviates many of the concerns seen with previously used databases. Our secondary purpose was to assess the incidence and specific details regarding secondary procedures, including total hip arthroplasty, for patients during the study period.

Methods: The MarketScan Commercial Claims and Encounters Database was searched using ICD-9 and CPT codes to identify patients who underwent any arthroscopic hip procedure from 2008 through 2013, including soft tissue procedures, such as labral debridement or labral repair, as well as bony procedures, such as femoroplasty or actetabuloplasty. Patients identified were characterized by gender, age group and year of the initial procedure. Data for procedures was also divided between index procedures and revision procedures. Regression analysis was used to evaluate differences in surgical trends between individual patient groups delineated by age and gender. The Cochran-Armitage trend test was used to identify significant differences in surgical trends seen yearly.

Results: A total of 27,997 patients underwent a total of 55,477 arthroscopic hip procedures from 2008 through 2013. The number of cases per number of patients in the database increased every year with 15,031 total procedures in 2013 versus 3,763 total procedures in 2008. Prior to changes in CPT coding, arthroscopy with synovectomy represented the most commonly performed procedure. However, femoroplasty became the most common procedure in 2012 at 25 percent of all cases and increased to 28 percent of all cases by 2013. Acetabuloplasty and labral repair showed similar increases from 2011 to 2013, becoming the second and third most common procedures during that time at 21 percent and 17 percent of all procedures. Females underwent more procedures during the study period (35,088 to 20,389 for males). Patients age 40 to 49 were most likely to undergo any procedure, undergoing 7,467 (27 percent) procedures with labral or chondral debridement being the most common procedure performed (58 percent) followed by femoroplasty (22 percent). A total of 2,754 patients (10 percent) underwent a second arthroscopic procedure during the study period with labral or chondral debridement representing the most common secondary procedure (54 percent). Patients initially undergoing femoroplasty were most likely to undergo a second procedure (13 percent). A total of 1,625 patients (6 percent) underwent a total hip arthroplasty following an arthroscopic procedure during the study period. Patients undergoing arthroscopic loose body removal had the highest percentage of patients eventually undergoing total hip arthroplasty (11 percent).

Discussion and Conclusion: Arthroscopic hip procedures continue to increase in incidence. Femoroplasty and acetabuloplasty have become the two most common surgeries since specific coding began for these procedures through labral or chondral debridement was the most common secondary procedure. Patients age 40 to 49 underwent the most arthroscopic hip procedures. Despite smaller studies that have shown that lack of addressing osseous lesions may lead to a higher risk of failure, this large database did not support this. A significant percentage (6 percent) of patients undergoes hip arthroplasty within four years of having hip arthroscopy done.

Conclusion: Our findings indicate that early sports specialization is not common in professional ice hockey players.

Significance of Findings: These findings imply that early pediatric sports specialization before age 14 is not necessary for athletic success and emphasize the importance of diverse sports participation during youth to avoid injury and psychological burnout.

Acknowledgements: We would like to thank the head athletic trainer for the Hershey Bears Hockey Club, Daniel Stuck, for his assistance in data collection.