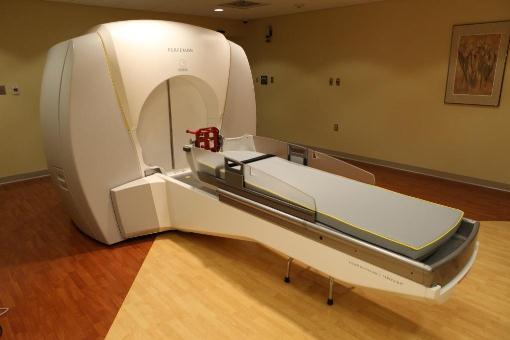 The new system allows the surgical team to streamline the set-up for such procedures, perform radiosurgery more quickly and efficiently and treat multiple tumors during a single session. Fewer than 70 health care providers in the United States use Gamma Knife Perfexion technology, and Penn State Hershey is the first in central Pennsylvania to do so.

Gamma Knife radiosurgery uses a single dose of radiation instead of a surgeon's scalpel to treat a wide range of diseases, including both benign and malignant tumors, Parkinson's disease, vascular malformations and lesions that cause epilepsy. The radiation is delivered in 192 beams precisely focused on the treatment area.

“Penn State Hershey's neurosurgeons and radiation oncologists are among the most skilled and experienced in the country in the use of focused radiation to treat brain tumors and other diseases of the nervous system,” said Dr. Robert E. Harbaugh, director, Penn State Hershey Neuroscience Institute and Distinguished Professor and chair, Department of Neurosurgery, Penn State Milton S. Hershey Medical Center. “The new Perfexion technology will make radiosurgery the preferred option for a wider range of tumor patients and will reduce treatment time for all patients.”

Since no incision is made in a Gamma Knife procedure, the risk of surgical complications is low. Treatment is much shorter than conventional surgery and causes only minor discomfort. Also, the patient leaves the hospital the day of the procedure – compared with a typical stay of two weeks or more for traditional brain surgery.

Behind the Scenes on the Front Lines: Psychiatry and Behavioral Health