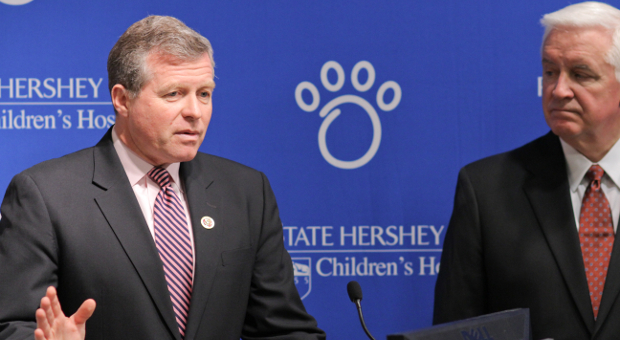 U.S. Representative Charlie Dent, of PA's 15th District, announced that he has introduced a bill that would allow eligible children to continue receiving service from state programs like the Children's Health Insurance Program (CHIP).The announcement came during a news conference this week at Penn State Hershey Children's Hospital. Governor Tom Corbett also showed his support in favor of the bill to “protect CHIP.”

The Affordable Care Act requires all children at or below 133% of the Federal Poverty Level to enter the Medicaid program. Families in Pennsylvania would be moved to the Medicaid program at the beginning of 2015, after having received an exemption from changing coverage until the end of 2014. Dent's bill, called the “Children's Health Insurance Protection Act,” aims to permanently preserve CHIP as an option for families. States would also have the option to cover Medicaid children with CHIP funds.

>> Click here to view more photos from the news conference

“It's about doing the right thing to make sure that children can continue to see the doctors they care about and who care very much about them,” Dent said.

“We're hopeful that Congressman Dent's proposed legislation will be passed so that parents have a sense of comfort knowing their children are covered and continuing to receive state-of-the-art care,” said Dr. Craig Hillemeier, medical director of Penn State Hershey Children's Hospital.