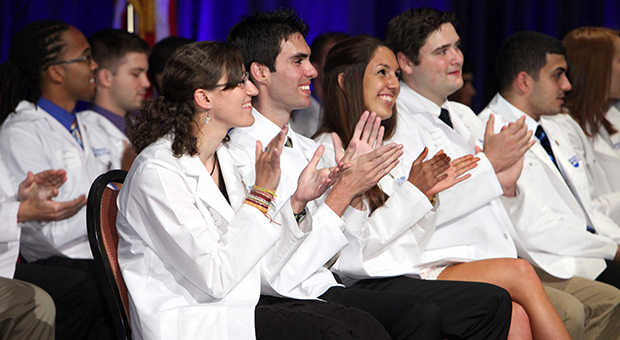 Medical students, like most people their age, use social media extensively, but medical schools may need to offer more guidance in potential pitfalls, according to Penn State College of Medicine researchers.

“We assessed how medical students engage with social media platforms like Facebook and found that they have a pretty sophisticated understanding of its risks and benefits,” said Daniel R. George, assistant professor of humanities. He and Dr. Michael J. Green, professor of humanities, conducted two studies that report findings from a survey of 2,109 medical students nationwide.

In the first study, researchers asked students how they and their peers would and should respond to eight hypothetical scenarios involving Facebook. The scenarios focused on ethical issues including privacy, the patient-doctor relationship, and relationships with peers.

In one scenario, a student hypothetically revealed on Facebook that she was caring for a local weatherman. The majority of students, 55 percent, said they should address a peer who violates patient privacy on Facebook. Almost half of the students also indicated that this is what they would actually do. However, 31 percent thought their peers would not do anything to address the situation.

Another hypothetical scenario involved a patient asking a student for medical advice over Facebook. Most students, 61 percent, said that they should explain to the patient that this form of communication is not acceptable. However, 30 percent believed their peers would send a short message with the advice asked.

The researchers reported their findings in AJOB Empirical Bioethics.

Overall, the students seemed to be mindful of the potential dangers of social media use and had a good understanding of how it could be used or misused in a professional context. However, when faced with an ethical dilemma, there was a disconnect between what the students said they would do versus what they thought they should do. Though 39 percent of students said that they should tell a hypothetical peer to remove drunken pictures and foul language from Facebook, 41 percent said they would actually do nothing. And, most felt their peers would probably do nothing as well.

Some students promoted strategies for integrating Facebook into future practice, such as sending appointment reminders and relaying public health information to their patient base.

In the words of one student, “If I had a professional Facebook account, [patients] could stay updated on things like schedule changes, get [appointment] reminders, join fundraisers…or stay up to date on public health type information.”

“I think some patients would see it as above and beyond if a doctor messaged them to see how they were doing,” wrote another. “In this day and age I think a lot of patients might actually appreciate that kind of personal contact from their doctor.”

“Students seem to understand the risks of using social media like Facebook, but there is clearly a need for medical schools to help students take the proper course of action,” said George.

In the second study, published in BMJ Postgraduate Medical Journal, the researchers examined what students believe about the ways residency programs use Facebook in their admission processes.

However, previous research has found that more than half of the residency programs in the country would reject applicants based on unprofessional Facebook content, such as the inappropriate pictures in the scenario.

“Although most students feel that social media profiles shouldn't affect admission, the reality is that many admissions committees are screening them,” said George. “This is another example of how medical schools have an obligation to help educate students to minimize risk.”

Penn State College of Medicine in partnership with the Association of American Medical Colleges (AAMC) designed the survey.

History of Medicine lecture will examine race, gender and region in the 1910 Flexner Report