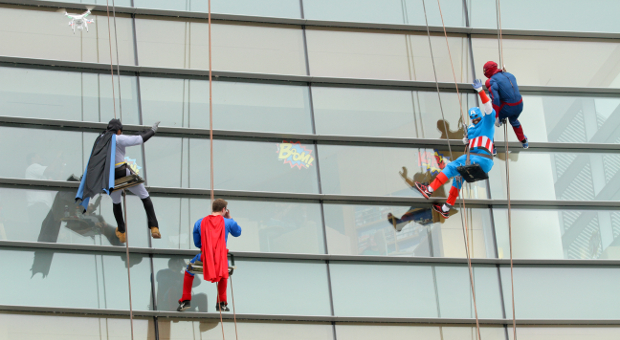 Alexia Heilman has long admired Spiderman. The 11-year-old loves the thought of a superhero who can shoot webs. Ahzhanae Kirkland, 7, puts Superman atop her list.

On Wednesday, Aug. 19, both girls were among several children at Penn State Hershey Children's Hospital who got to see four popular superheroes descend from the top of the building. Some gathered on the hospital's front lawn while others got a close-up view of the caped crusaders from the inside through the third- and fourth-floor windows.

“They've got to wake up each day and fight for their lives,” said Captain America, also known as Michael DeJesus. “Today's a day they forget about being in the hospital. It's a small party just for them.”

This marked the third annual appearance at the children's hospital by Batman, Captain America, Spiderman and Superman.

Read more about this year’s event — and view a photo gallery and video — in this Penn State Medicine article.

Brewing gratitude, one bag at a time