Researchers shed light on pathway from virus to brain disease 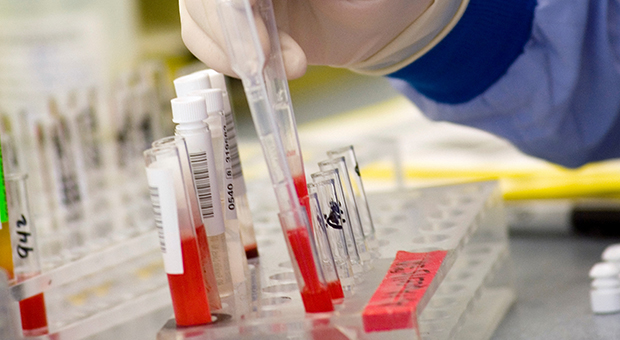 Why people on immunosuppressant drugs for autoimmune conditions have a higher incidence of an often-fatal brain disease may be linked to a mutation in a common virus, according to researchers at Penn State College of Medicine.

Progressive multifocal leukoencephalopathy (PML) is a rare disease of the brain’s white matter caused by the John Cunningham polyomavirus (JCV), a usually harmless virus that infects up to 80 percent of healthy adults.

In the past, the virus usually only developed into brain disease in individuals with suppressed immune systems, such as AIDS patients and organ transplant recipients on immunosuppressant medications. Over the past decade, however, new drugs for a variety of autoimmune conditions have been identified as a key risk factor for the brain disease.

The disease is now most common in multiple sclerosis patients who have the virus and who receive an immunosuppressant therapy called natalizumab. Patients with Crohn’s disease, psoriasis, rheumatoid arthritis, B cell lymphoma and chronic lymphocytic leukemia have also developed the devastating brain disease after immunosuppressant therapy with natalizumab and other drugs.

“Nobody comes away unscathed from PML—you either die or you’re left with a lifelong searing neurological defect,” said Aron E. Lukacher, chair and professor of microbiology and immunology. “Because we don’t know how the drugs cause the JC virus to amplify from a silent infection, we really have no way of controlling it.”

When other researchers studied the virus in patients with PML, they found a mutation in its protein shell, the part that allows it to bind to and infect human cells.

In the new study, Lukacher’s team sought to answer the question: Could this mutation affect how the immune system responds to the infection?

To answer this, the researchers developed a new mouse model of polyomavirus infection that shares many characteristics that are seen in progressive multifocal leukoencephalopathy.

They learned that mice with mutated polyomavirus strains had a reduced T cell response, the major part of the immune system that protects against the virus.

“We found that mouse polyomaviruses with a single amino acid change in their shell elicit a very different magnitude and quality of the T cell response that is needed to control the infection,” Lukacher said.

The researchers also found that a signaling protein called type I interferon controlled the difference in T cell response in mice with this mutant polyomavirus.

Type I interferon directly controlled the ability of the virus to grow in mouse cells, the researchers said. It also controlled the size of the T cell expansion and the function of these immune cells against the infection.

These findings raise the possibility that viral shell mutations may influence the T cell response to John Cunningham polyomavirus in humans, and play a role in the development of progressive multifocal leukoencephalopathy, the researchers wrote in the Journal of Virology.

It is still unknown how immunosuppressant therapies may cause these mutations in JCV, the researchers said. However, understanding the importance of the T cell response could help researchers prevent the development of progressive multifocal leukoencephalopathy in autoimmune patients.

“We need to find ways to improve the T cell responses in patients on these therapies,” Lukacher said.

Other investigators on this project were Qingsong Qin and Shwetank, postdoctoral scholars, and Saumya Maru, graduate student in microbiology and immunology, Penn State College of Medicine; and Elizabeth L. Frost, Emory University.