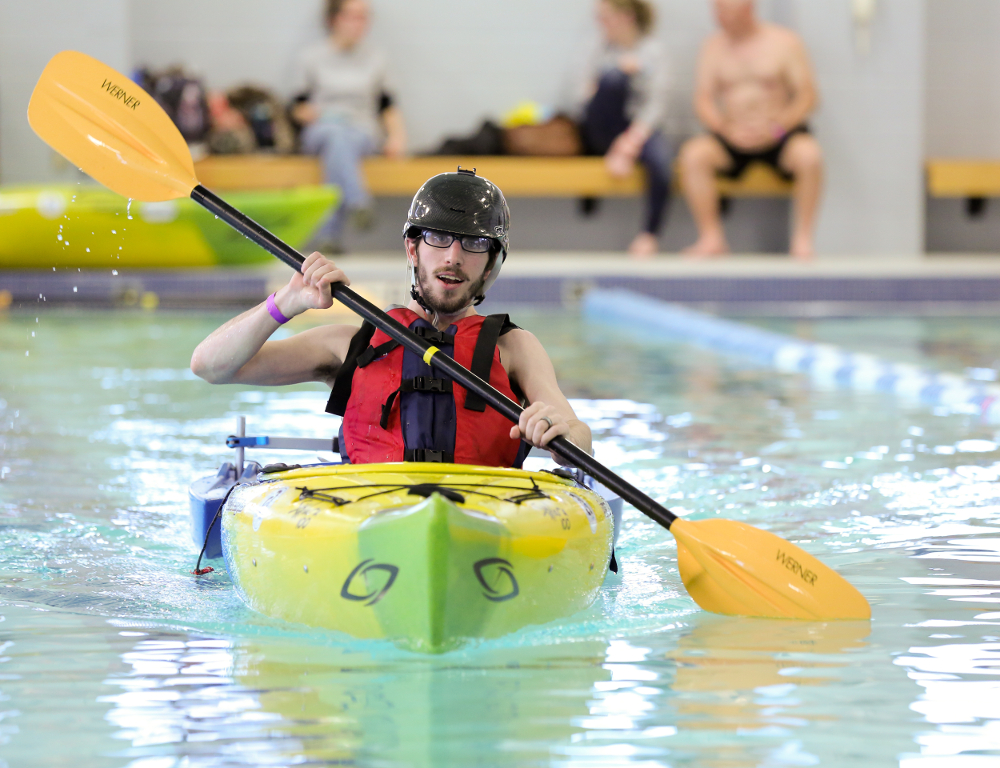 Brooke Barton grabbed the rugby ball, set it in her lap, and furiously wheeled across the gymnasium. She paused to pass it, then zoomed away from the cluster of chairs crashing against each other as the seven guys she was playing with and against tried to steal, pass and block the ball.

The Enola woman never considered herself particularly athletic, but since a February 2016 car crash left her paraplegic, she wants to experiment with everything. “I want to know what I can do,” she said during a break from the game. “I want to prove to myself I can do things.”

The rugby match was one of a several sports and recreation activities held during the first Penn State Rec Fest Saturday afternoon at Penn State Harrisburg. The event brought together more than 400 local residents with disabilities, more than 100 student and employee volunteers, and representatives from more than 40 community resources.

“A big part of what we do is taking it a step beyond the medical aspect of helping people get physically healthy to reintegrating people into the community so they can live abundant lives after disease or injury,” he said. “One way we can help folks back into the community is through recreation and sport.”

Until this weekend, there was no annual event in the area to engage the community and bring resources and people with disabilities together under one roof. The event was a physical manifestation of the four pillars that make up Penn State Health's mission of patient care, education, research and community outreach.  “We anticipate sponsoring RecFest every year, as it provides a win-win for everyone involved.”

Gater said it brought together employees, students and volunteers from several area campuses to help break down environmental and social barriers.

“We want people in the community to recognize that just because people have disabilities doesn't mean they can't actively participate in life,” he said. “You don't lose your passion for something just because you have a disability. They just need to have the community around them supporting them as they regain that passion.”

The Milton S. Hershey Medical Center Department of Physical Medicine and Rehabilitation and Penn State Health Rehabilitation Hospital sponsored the Saturday event in partnership with Global Abilities, a nonprofit foundation based in Philadelphia. Global Abilities has put on similar Rec Fests in Philadelphia, Pittsburgh and Baltimore to bring together people with disabilities with the companies and organizations that serve them.

“We are really excited about bringing it here because a lot of people can't get to Philly or Baltimore,” said AJ Nanayakkara, executive director of the Global Abilities Foundation. “There are a lot of organizations here in this area, and we just need to educate people that these activities are here.”

At Saturday's event, children through senior citizens with disabilities were able to try out adapted versions of sports such as kayaking, baseball, scuba and rugby, or visit with representatives from community resources.

Shawn Brown, executive director of Fitness 4 Focus, said the event was a great venue for getting word out about his company's three local gyms and workouts for individuals with special needs. “That is the hardest thing for us – letting people know we exist.”

Danette Blank, executive director of Vision Resources of Central Pennsylvania, said her organization used to offer goal ball, tennis and softball for the blind and visually impaired. “I'm thinking being part of an event like this may help us get together enough people who are interested to get it started again,” she said.

Nancy Lokey, a rehabilitation nurse and certified brain injury specialist with Penn State Health who coordinated the event, said exercise and recreation increase the quality of life for everyone, whether they struggle with disease or injury or not.

“It makes us feel good, it gives us purpose and helps keeps us healthy,” she said. “Plus it keeps us going, and it's fun!”

Lokey's colleague, Peg Kanzleiter, a recreation therapist at Penn State Health Rehabilitation Hospital, said she always wanted to bring more opportunities for adaptive recreation to the area. “I always tell people it's not about what they can or can't do,” she said. “It's just a matter of figuring out how, and finding the right resources.”

That could mean using a sip-and-puff device to pull the trigger on a gun to hunt, or getting involved in adapted ice skating or horseback riding program to build physical strength and confidence.

Alex Eckerd of Elizabethtown came to the event in camouflage with his wife, Larissa, and stopped to chat with representatives from the Physically Challenged Bowhunters of America.

Global Abilities' Nanayakkara said the event was not just about recreation: “Recreation is the first step toward developing self-esteem and living life again.”

Coronavirus updates and resources for College of Medicine faculty, staff and students