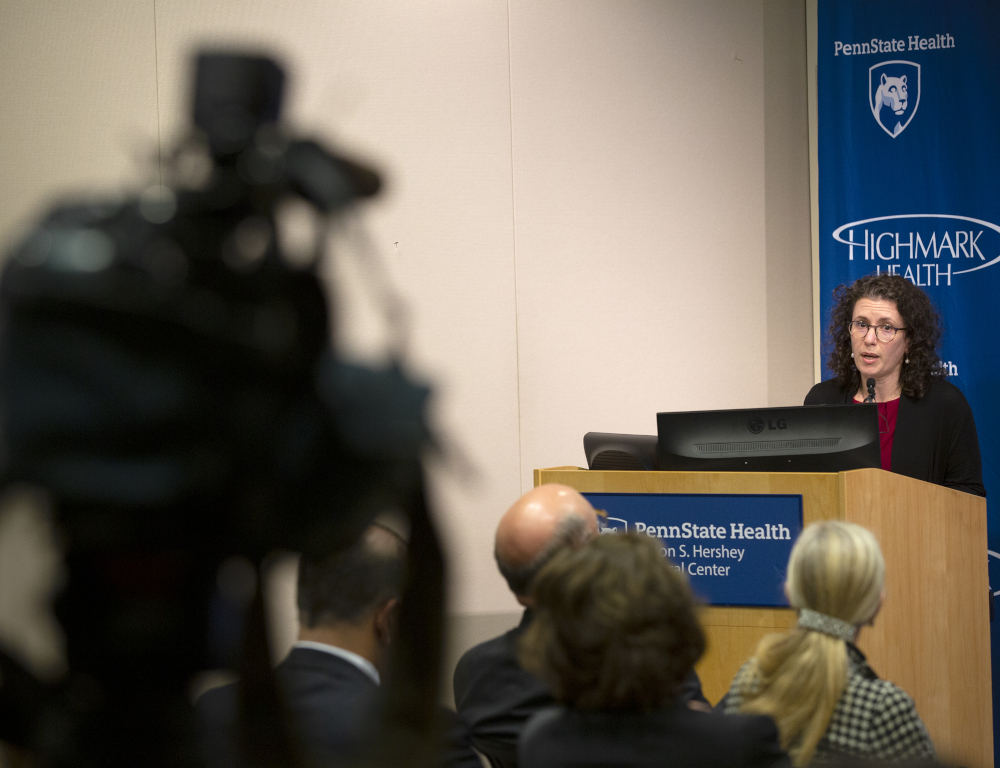 Dr. Sarah Kawasaki, a Penn State Health physician and director of addiction services at Pennsylvania Psychiatric Institute, was among the speakers at a news conference co-hosted by Penn State Health and Highmark Health on May 15, 2019.

Highmark Health and Penn State Health are making progress in addressing opioid misuse and addiction in central Pennsylvania, responding to the region’s needs with an approach that emphasizes primary prevention, safe prescribing, high-quality and accessible treatment for substance use disorder, innovative research and medical education, and community supports.

During the 2018 calendar year, Highmark Inc. (the insurance division of parent company Highmark Health) lowered overall opioid prescription fills by 15 percent for commercially-insured members in Pennsylvania. Ninety percent of Highmark’s commercially-insured members who were prescribed opioid-based medications for the first time received a week’s supply or less of medication. This follows the CDC’s safe prescribing guidelines, which recognize the increased risk of dependence for individuals who use opioid-based medications for an extended period of time.

Highmark has provided a $750,000 grant to Penn State Health for an initiative that is designed to improve access to and coordination of care for individuals confronted by opioid addiction. The Pennsylvania Coordinated Medication-Assisted Treatment (PacMAT) program is led by Dr. Sarah S. Kawasaki, assistant professor in the Department of Psychiatry and director of addiction services at Pennsylvania Psychiatric Institute (PPI) in Harrisburg. PacMAT refers patients with severe opioid use disorder that cannot be treated in other settings to PPI, which provides physical, mental health, case management and legal services. The program works with primary care sites, emergency departments, psychiatric clinics, probation and parole officials, and addiction counseling centers across seven counties to connect patients to a continuum of treatment for their addiction.

“As individuals, we all know someone whose life has been upended by opioid addiction. And as health care providers, we see the impact of this crisis every day in our emergency rooms, our

Dr. Caesar DeLeo, vice president and executive medical director of Highmark Inc., provided a detailed overview of Highmark’s three-pronged approach on opioids at a news conference on May 15, 2019.

psychiatric hospital, our outpatient practices and sadly, even our morgues,” said Dr. Craig Hillemeier, dean of Penn State College of Medicine, CEO of Penn State Health and senior vice president for health affairs for Penn State. “Together, our clinicians and investigators are leading a multi-faceted approach to reduce opioid use and abuse and to improve the lives of those who are affected by it. We are grateful for Highmark’s partnership to sustain these endeavors.”

Highmark Health also recognizes the critical role that reducing stigma associated with opioid use disorder plays in helping people access treatment, return to their family lives and the workforce, and make a successful long-term recovery. In the spring of 2019, Highmark surveyed adult community members in each of its core health insurance markets in Pennsylvania, West Virginia and Delaware to understand the public’s attitudes toward and experiences with opioid dependence. The surveys yielded a statistically valid sample and were weighted to be generally reflective of each region’s age and gender demographics.

In the Harrisburg designated market area, nearly three out of every four people (72 percent) said that there is a problem with opioid overuse in their community. Approximately eight out of ten (83 percent) believe that the health care industry should more closely monitor opioid prescriptions, and do more to educate the public about the risks associated with opioids (79 percent).

Three out of four people (75 percent) said that the person suffering had sought treatment, the highest rate among all designated markets areas surveyed by Highmark.

While more individuals have sought treatment in the area, opioid dependence remains highly stigmatized. Nearly nine in ten people surveyed in the Harrisburg designated market area (87 percent) believe that opioid addiction or dependence is mostly or somewhat the fault of the person using opioids.

“So many people across the country, and particularly in the regions that we serve, have been affected in some way by the opioid crisis,” said Deborah Rice-Johnson, president, Highmark Inc. “In response, we launched a ‘war on opioids’ in 2018 to address this urgent problem through new programs, policy changes and partnerships that span across the Highmark Health enterprise and extend into the community. We are pleased with the initiative’s early progress, but we recognize that this war will not be won easily. Doing so will require a spirit of collaboration, and a recognition that opioid dependence is a chronic condition rather than a moral failing. Our partnership with Penn State Health will empower us to better serve central Pennsylvanians throughout this evolving public health crisis.”

Pennsylvania has been hit hard by the opioid epidemic, with the 15th-highest rate of diagnosed opioid use disorder among patients who are insured by members of the Blue Cross Blue Shield Association (BCBSA). As of January 2019, the prevalence of opioid use disorder among Highmark’s commercially insured members in Pennsylvania is about seven per 1,000 people. The average for the BCBSA is 5.9 per 1,000 people.

Highmark Health has implemented a three-pronged, progressively intensive strategy to address the opioid crisis. The first component focuses on prevention by offering effective, non-pharmaceutical pain management therapies at the site of care. This ensures that members who can manage their pain without opioids never receive them in the first place. Physical therapy, occupational therapy and chiropractic services are covered for Highmark’s fully- insured members, and more than 40,000 practitioners offer discounts to members on alternative treatments such as massages, yoga, acupuncture and homeopathy. Highmark also provides cognitive behavioral therapy through psychologists as adjunctive therapy for pain.

The second component of Highmark Health’s strategy emphasizes safe opioid utilization through new evidence-based medication policies, as well as ongoing monitoring and educational efforts for both members and prescribers. Highmark uses a data-driven approach to monitor members’ prescribing patterns and identify potentially unsafe use of opioids and other controlled substances.

The third component of Highmark Health’s strategy focuses on linking members and patients who have opioid use disorder with high-quality, accessible treatment programs that mitigate short-term risk and promote long-term recovery.

“Our three-pronged strategy is designed to help our members effectively manage pain, and enhance their safety by using evidence-based policies and practices that reduce the chances of our members becoming addicted to opioids,” said Dr. Caesar DeLeo, vice president and executive medical director, Highmark Inc. “For those who have opioid use disorder, our goal is to facilitate access to appropriate resources that promote lasting recovery.”

Additionally, in 2017 and 2018, Highmark and the Highmark Foundation collectively gave nearly $500,000 toward community organizations and programs fighting the opioid epidemic in Pennsylvania. These grants and sponsorships support front line efforts including filling an emergency need for naloxone, community-based drug prevention and addiction treatment plans, and rehabilitation and treatment facilities.

In the inpatient setting, Penn State Health Milton S. Hershey Medical Center’s pain specialists have formed an Opioid Stewardship Service to meet with patients who need guidance on the use of opioids to treat pain. The initiative worked with more than 600 patients in 2018, providing support to patients, families and staff – and facilitating additional treatment as needed.

Penn State Health is using technology to engage physicians and mid-level practitioners across the state who treat opioid use disorder. Twice each month, the health system convenes virtual discussions through a platform called Project ECHO, on which cases are presented and met with treatment recommendations. The goal is to equip providers statewide with tools to employ evidence- and case-based management of the illness.

As it trains the physicians of tomorrow, Penn State College of Medicine is working to ensure that both its graduates and its resident physicians are prepared to address substance use disorder in the clinical setting. This includes the creation of a fellowship in addiction medicine, which will arm physicians from many primary care and subspecialty disciplines with a full understanding of the nature of the disease and how to treat it. The first two fellows will begin in 2020. Other efforts include expanding education on opioid use disorder throughout the medical school curriculum and providing waiver training – on the prescription of buprenorphine – for all graduating medical students.

The College of Medicine is also engaged in finding better prevention methods and treatments for opioid use disorder through innovative translational and clinical research. This includes the use of novel compounds, mobile technology and biofeedback. Examples of such work include: