Neighborhood nurses team up to save a life 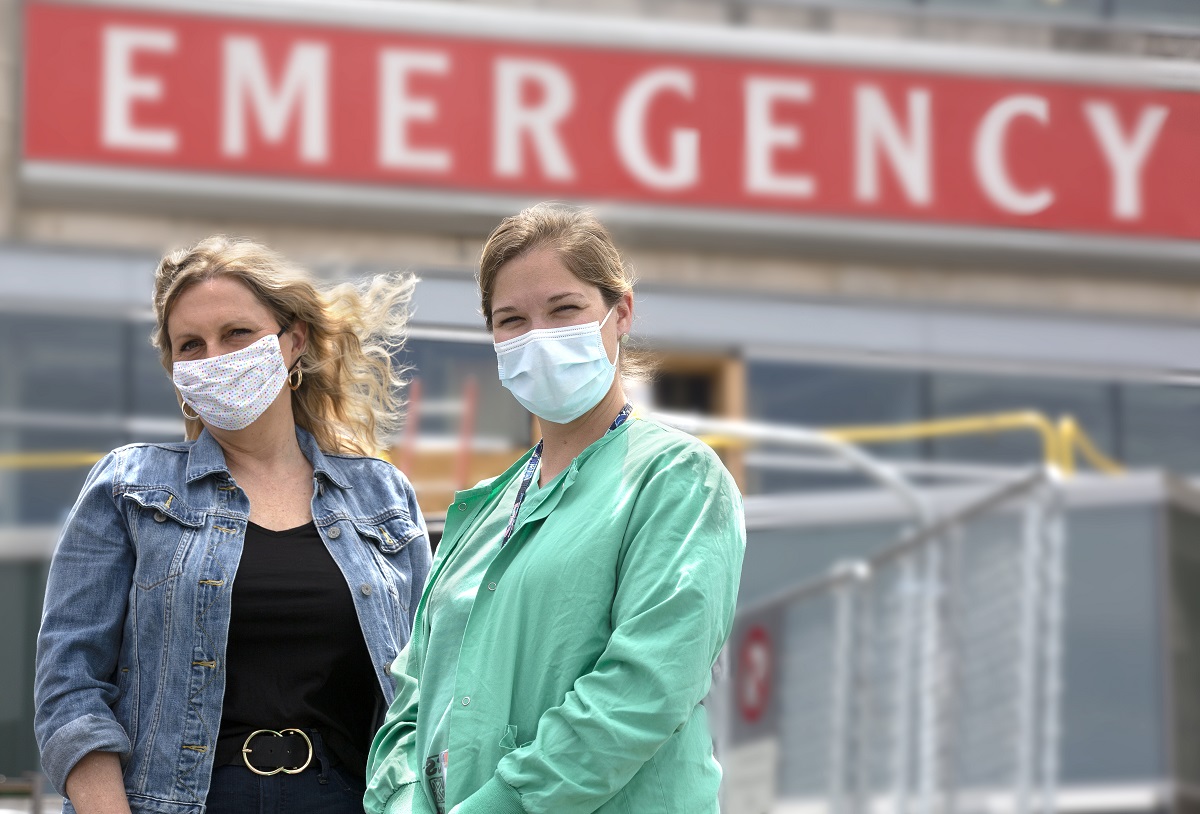 Before March 13, Marie Conley knew Kaitlin Snook only in passing, as a neighbor in her Elizabethtown development. Since then, she views Snook as a hero.

“The first time I saw her after it happened, I just cried – how do you ever thank someone for something like this?” said Conley, who owns a consulting business and is a former director of Children’s Miracle Network Hershey.

Since being diagnosed in 2012 with Cushing’s disease, Conley has battled myriad physical ailments. The disease is a rare condition caused by a benign tumor in the pituitary gland that produces too much adrenocorticotropic hormone, which overstimulates the production of cortisol in the adrenal glands. Conley, who subsequently became adrenal insufficient, has had five major surgeries and more than 25 emergency department visits – most at Penn State Health Milton S. Hershey Medical Center – and battled with stress fractures, hair loss, weight gain and more.

On March 13, the latest manifestation of the disease likely would have taken her life, had it not been for the quick action of a team of Hershey Medical Center nurses rallying around their neighbor.

“I was at a café in Hershey, by myself, when my stomach began cramping,” Conley recalled. “I remember sweating profusely as I drove home, and then leaving the garage door open, which I never do. That was God looking out for me.”

Conley remembers thinking her face felt “thick” and that she should get out her stress dose of steroids, which she fumbled with in her bathroom unsuccessfully. She thought to call her neighbor, Ellen Tanner, a nurse who was at work at the medical center that day.

“I remember telling her I felt like I couldn’t breathe,” Conley said, recalling her tongue and mouth were swelling as she lapsed in anaphylactic shock. The last thing she remembers doing was calling 911.

Meanwhile, Tanner was hurriedly texting other neighbors, including Kaitlin Snook, a float pool nurse at Hershey Medical Center who happened to be at a nearby gym. She jumped off the treadmill, grabbed her daughter from the child care area and raced to Conley’s house.

She got in through that open garage door.

“I found Marie upstairs on the floor, unresponsive,” Snook said. “There were meds everywhere. I had no idea what happened, but I remembered knowing she has Cushing’s disease.” Seeing the vial of hydrocortisone on the floor and knowing a stress dose was 100 milligrams, Snook drew it up and gave Conley the lifesaving medication.

Conley wasn’t out of the woods yet; she remembers telling the ambulance crew on the ride to the medical center to tell her 15-year-old son that he would be OK without her.

Conley tears up at the memory.

“Had Ellen not texted, had Kaitlin not been nearby and come, what would have happened? If these nurses hadn’t acted, I wouldn’t be here,” she said.

Fifteen years’ experience working in an emergency room setting helped Snook calmly assess and react to the situation, she said, and she initially brushed off Conley’s “hero” references.

“This is what nurses do – I don’t expect that I should have done anything different,” she said, “I’m thankful that Hershey Medical Center has given me this training where I’ve been in situations with many critically ill patients.”

In most cases, though, she realized she is part of a team that saves lives, and this time, she had done it all on her own. “That’s an overwhelming thought, but it makes me very grateful for what I do,” Snook said.

“I no longer just see a neighbor who I casually said hello to, but now and forever will see her as the angel who saved my life,” Conley shared.

Her words of admiration and pictures of Snook were included in a three-minute video, part of which aired March 8 on TODAY. The entire video is posted on the show’s website. Hear Conley tell her story at :32 into the video.